A downloaded .png opens as XYZ/A in krita - why is this?

this has been a problem for a while now. I messed with the color and display settings but nothing’s happening.

this is how its supposed to look

how can I fix it?

Weird, what color profile and bit depth does the kra file have compared to the exported image?

I set everything back to default on krita. As for the image, I have no idea, it’s from a tumblr post

Which version number of krita and which operating system are you using?

You’d need to provide a link to the original image and the .kra file you’re working with (via a link to a file sharing service or website).
Until you do, nobody can know what’s happening in there.

For some totally strange reason, you’ve converted the original image (which downloads ok as a .png and opens ok in krita) into an XYZ/Alpha colour space. In that state, it can’t be properly converted back again.
I suggest that you don’t do that.

any idea on how I can change that?

Open the original downloaded image. It opens as RGB/A wiith no problem.
Do you have any explanation for the XYZ/A colour space of the ugly.kra file?

honestly, I have no idea. I just opened the original, this popped up 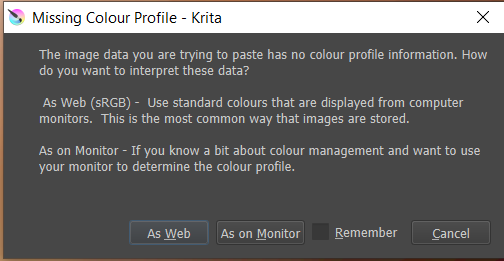 That’s interesting. I don’t get that message when I open the downloaded .png file (which I renamed as skin-tones.png).
Try choosing ‘As on Monitor’ instead to see what happens.

I’m using a Linux system but I have no idea if or how that could make a difference.
I’m also using version 5.0.6 (the current formal release).
Can you update to 5.0.6 in case some colour space bug has been fixed since 4.4.8?

If those ideas don’t work, you’ll need advice from someone who actually knows and understands this area.

it’s the same with ‘as on monitor’
I will try and update Krita.
and thank you for your help. I’ll come back if the problem is still unresolved

In a minute, I’ll send you my .kra file which looks good, to me.

Is that ok for you?
Tell me later

okay, I downloaded 5.0.6 and for some reason it still opens it as XYZ/A
and your .kra file looks okay

okay, I see, I think I figured it out
this right here. 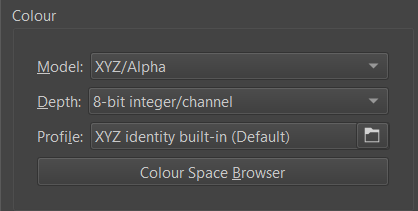 So where is that and how do you manipulate that to get a good result?

Either way, it doesn’t explain why I have no problem opening the downloaded .png with 5.0.6 on Linux and you have a problem on your Windows system.

I edited your topic title to make it precise.

It’s in the pop up when I go to create a new file.
right here 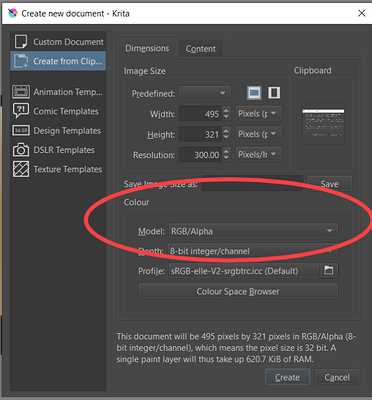 If I have that set to XYZ/A 8-bit etc. then I still have no problem opening skin-tones.png as downloaded.
The mystery remains.

I believe they were pasting into a document, not opening a file.

I didn’t spot that possibility - sigh.

If I have that set to XYZ/A 8-bit etc. then I still have no problem opening skin-tones.png as downloaded.

You can even drag it out of your browser and drop it into Krita, on Linux & Windows.
With Firefox, it was even possible to directly pull the thumbnail out of the browser onto the canvas.
On Opera/Chrome/Chromium/Edge (but Edge only on Windows) this is only true for the enlarged picture, the thumbnail isn’t recognized by Krita.