Hello, I have never used this platform before.

So, I had this old, kind of wise teacher, he had a roll of rough paper with him, and he did this thing of drawing over the roll working a bit every day. It wasn’t some 1920x1080 type of page, it was a literal roll, which might be something like 98201x1080 or something type of resolution.

Altough It sounded kind of ridiculous, the idea of a prolongued workspace that shapes a broad image but then going into smaller details on each spot sounds interesting, and it’s also something I kind of need.

I’m currently working in some worldbuilding stuff, and if you know anything about worldbuilding is that it’s not simple to draw giant pieces of a city, not only is designing a detailed city overly complex, I also need to draw a map of the entire planet, with details of what’s going to be on each spot (though I just need to draw the giant tower or big trees, not the pores of an ant on top of a teapot)

But the reason why this would be a good addition is in the overall context of it, both in a commercial way and an intrinsic value way. If such a giant drawing with details of each street were to be seen, kind of like where’s waldo, it would be something you would be staring at in an art museum for hours because every corner would be interesting. Or it could be something you hang in the wall, all proud for achieving.

For a poster, it would be a seller, for a museum it would be worth more than a banana with a tape or a monkey nft, to be seeing an entire city from up close.

This is more of a master’s of masters kind of project, for an amateur it would be used for running it on low end pcs, not giant boards.

Now, it’s so much demand demand, I might as well propose some suggestions of how to tackle it. 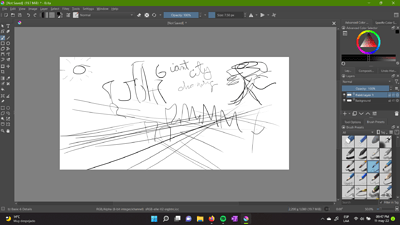 So let’s say Im working in some huge drawing like this, this could easily be 33200x10203 with about 1500dpi or such. But what the system does here is reduce the overall quality of the image to something like 1920x1080 with 200 dpi, just for visualization. And once you zoom in into a particular zone, let’s say this one. 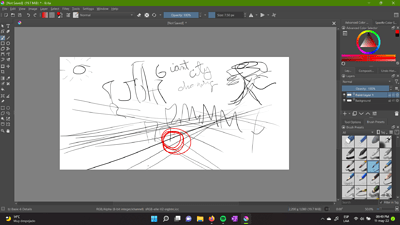 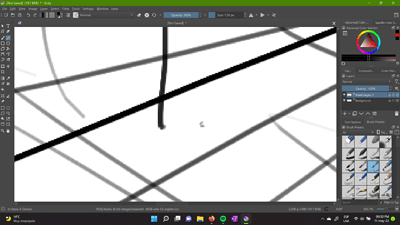 The system, instead of remembering the entire canvas, just now renders this zone in particular, in a square that the user can move around to render, and will only start to render once the user applies the rendering process. 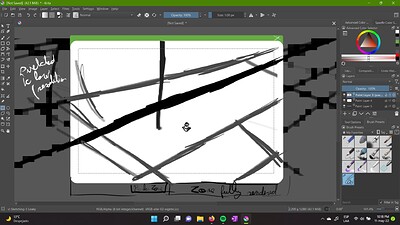 And now the user edits the image, but only in the selected part. Think of this as a kind of jigsaw puzzle, where instead of drawing the entire image you only draw each jigsaw piece (and honestly, using a jigsaw piece for an icon reference would just stick, like the teardrop for selecting colors or the bucket for painting the entire image) where you take out the jigsaw part and edit only that one. You could also insert a small outline of the parts from the outside, some “padding of the content” thing you see when you search for “box model”, to be rendered instead of being pixelated so they know where it would fit (because otherwise they might end up making unaligned sections like those -_ that surge in textures), or just a small selection edge for warning of “it’s best if you just go render and edit another zone instead of drawing this part”. (I used the selector for reference in the mockup above)

Of course these images are going to take up a lot more space, but that’s the point of the job, to be big. What I’m suggesting is not to thaw out 64 gigabytes of ram for some insanely detailed drawing, what I’m saying is more of optimizing an entire detailed drawing for a pc with just 6 or 4 gigabytes of ram, on which the program only takes the part that’s needed from the disk, and not the entire thing all at once.

Where’s waldo is a good reference of what I want to achieve, now imagine it 30 times bigger and as a poster. Oh, imagine you manage to make it so optimized you could pull a mandelbrot set with it.

And it would blow up 300 times more if more people could work in the project along, instead of being just one user, have something like 20 users working on different parts of the art piece. Though this might just be idealizing too much, it’s just meant to optimize a huge chunk of effort.

Hello @FranSauce8, and welcome to the forum!

It’s all very “nice” what you tell there so imaginatively, a nice wishful thinking, a dream, but it has not much to do with a “feature request”. it also currently moves outside the feasibility. With what you wish for, a new software would have to be developed, because in the end there wouldn’t be much left of an extended Krita. Even more so if your “extra suggestion” was also taken into account.
Well, at least the vector tools are already on the list of tools to be improved in Krita.

How a feature request should look like you can read in the linked text. There you will see that you have to break your dream into fragments, each of the fragments would have to describe a single feature from the vast amount of features you describe here and wish to have according to the requirements of such a request.

Another obstacle in the way of making your dream a reality is the size of the existing development team of about 10 developers who would have to implement all this. Krita is not a commercial software, Krita is a free open source project funded by donations. And Krita is not Blender, it does not exist, these gigantic sponsorships that allow Blender to employ a large development team. And to implement a wish package like yours Krita would need an estimated three times larger development team, because the “normal” development of Krita should (and must) also be continued. There are several ways to support the development, on the one hand the classic donations, then the by many desired and preferred possibility to “buy” it in a store like Steam, Microsoft Store, or Epic Store (actually just another way to donate, you can’t actually buy Krita).
But you also mentioned the commercial aspect, apparently have that in mind. So if you could fund 20 additional developers for an estimated two years, I think it could become something out of your dream.

And finally, as a person familiar with computer technology for over 40 years, I thought to myself, on what kind of PC’s should what you are imagining work, whether my workstation with 96 GB RAM and two processors (12 cores) would be capable of it? But you also want your wish to work on low-end PC’s, that I think is unfeasible (to put it nicely)!

@raghukamath, I consider this more of a topic in the lounge, I wonder if we should move it there?

Partially translated with computer assistance, it’s late at night, it’s 5am here and I need to sleep now.

Add: This could be interesting, shows what is planned for the near future of Krita: Project Proposals Post Krita 5 - Google Docs

I have been toying with this need too but in a much smaller scale. For me a 10k pixel image already pushes my pc alot and being able to focus my memory on a small section at a time of the image at a time would be great.

Maybe give a blurry low resolution preview and then selecting an area you could edit it in full resolution on that section.

That’s basically what Affinity Designer/ Photo does. You work on a high res image and if you pan, it renders a low res oreview, which it gradually refines, based on the speed of your PC. It is usually instantaneous. In Illustrator, if you pan outside the rendered area, you will be in the ethernal blancness of the artboard…