Allow to bind saturation to opacity via curves

Hi, this would be nice: I’d like my brush stroke to become more saturated as it gets more transparent. And also to shift the hue slightly.

UI-wise, this would probably mean that we should see “opacity” here: 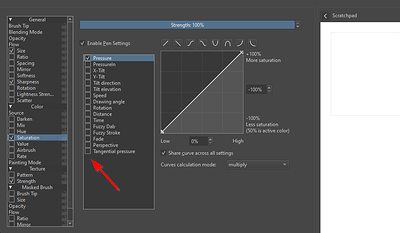 Hi, I see what you want to achieve, but I don’t see how technically “opacity” can become a sensor.

That’s because the variation of opacity itself comes from multiple categories: Opacity, Flow, Texture(Pattern/Strengh) and even more with Masked Brush. The final mix of opacities (for the dab or the stroke) is already complex and coming itself from multiple sensors.

Reinjecting this final opacity value as a sensor in the loop sounds like a really intensive job (CPU-wise) and I wouldn’t expect good performance only by imagining it (but I might be wrong here, I’m not a dev, just a feeling knowing a bit how the big picture is working from a GUI perspective). If a developer can confirm or reject this intuition, I’ll be happy to learn about that.

Anyway, what you want to achieve sounds already possible using just the sensor at your disposal in the Saturation panel. Setting Pressure on Saturation correctly, trying to mimic the flow of opacity variation you see on your stroke to just boost the saturation in sync, etc… Only one use case where the sync might be impossible: the Fuzzy cases; if you have Fuzzy random sensor somewhere in your math for final opacity. I can already guess the Fuzzyness of Saturation will not sync perfectly to the Fuzzyness of Opacity/Flow/MaskBrush/Pattern/etc because randomness is not a consistent flow of ‘same randomness’ as far as I know. And even in this case; maybe asking the Feature Request for syncing the randomness stream of Fuzzyness accross all sensors feels like an easier fix than getting an opacity sensor.

This topic was automatically closed 3 days after the last reply. New replies are no longer allowed.