I’m not sure if I should be posting here since the devs are definitely working on making a nice UI, but I’ll put my suggestions here so that people can see them

I propose that Krita takes a similar approach to Procreate by minimizing the dockers and menus using buttons/tabs. (disclaimer: I have not used Procreate before since I do not have an iPad, I am going off art process videos on YouTube)

Here are some (shabbily made) mockups for the concept: 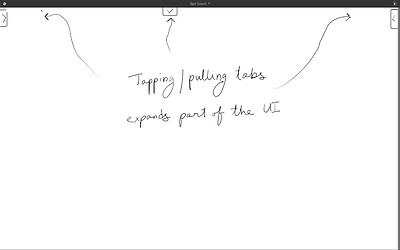 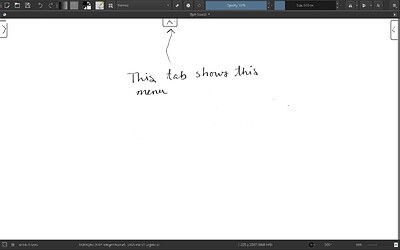 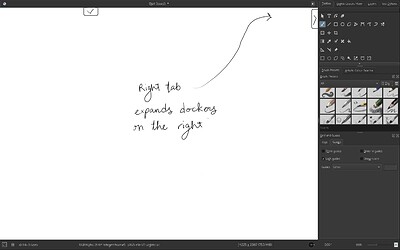 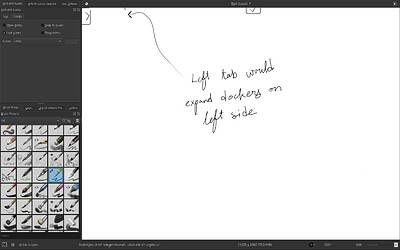 I think modifications to the existing Canvas-Only mode will be enough to implement this, but I’m not sure since I’m not a coder.

Also, to (somewhat) combat the need for a keyboard even when on a tablet, I found a solution in Clip Studio Paint. There is a round draggable button that toggles a menu similar to the hotkeys on an older Wacom tablet. Tapping one of the modifier keys toggles it rather that a temporary press.

I also saw the Windows application Tablet Pro, and I think an implementation similar to that would be good (maybe modifier keys, some letter and number keys that can be customized by the user, and basic actions such as Undo, Redo etc.

I like the idea of the buttons/tabs. Many art apps on mobile do this.

However, as for the modifier keys part, I don’t see that idea in my workflow. Maybe it wouldn’t be needed.

To get at the hidden menus, gestures could also be used. Infinite Painter uses this for some things.

Will there be visible elements likein your mock up or did you thought about invisible but sensitive areas at the edges.

I remember Ubuntu had (or still has) something similar, with context sensitive actions performed when clicking or moving the cursor on the screen edges and it was so anoying I had to turn it off since sometimes you had to be on thesee areas while using am application in full screen but Ubuntu wasn’t able to tell if you want to do a edge action or not.

I could imagine something similar happening in Krita if the areas are not visible.

However, as for the modifier keys part, I don’t see that idea in my workflow. Maybe it wouldn’t be needed.

I mentioned modifier keys since different combinations can be mapped to different shortcuts, reducing the space each shortcut takes on the screen. It may not be necessary in a shortcut-light workflow, but I can see the screen of someone who uses a lot of shortcuts being flooded with icons.
I do think the panel should be fully customizable though, so that people who don’t want modifier keys can free up space on the shortcut panel.

Will there be visible elements likein your mock up or did you thought about invisible but sensitive areas at the edges.

There would be a visible tab, though I imagine it would be much thinner, like Samsung’s edge panels.
Alternatively, there could be clickable buttons on the edges of the screen with tiny arrows like the ones next to Krita’s brush sliders in the toolbar.

Yes, the UI upgrade for android is needed but what i really2 need for now for the android krita is 1. the touch ability to undo and colour pick and 2. having gallery for the artworks. I really2 need those two.

I’d suggest that you create a new topic for your request, I’m not sure if it’ll be seen here.
This topic is about suggestions for the UI upgrade.

O ok thanks, but actually i did make a request before in the older entries.

I did tag sh-zam since I was told that they work on the Android version.