When i was just casually drawing for 6 hours, at the 6 hour mark it started kagging; i didnt think of it much because it was lagging earlier but just for 2 second, but this lag continued for 20 mins trying to fix it, but when i came back to krita and used my mouse it wasnt lagging, i tried drawing with it to (ofc it looked bad, but it wasnt lagging, then i tried the tablet it was lagging. I fixed it by quitting some apps, but even after that it lagged from time to time

Sounds a bit like Krita ran out of RAM and started swapping. But it’s hard to tell without more details.

What details do you need to identify it?

Everything. you didn’t mention the machine your using, it’s specs, what tablet, how much RAM Krita used (hard to find out afterwards), Krita’s performance settings, how big your project was, what exactly you were doing. They’re so many things that can cause lag without Krita even being involved. It’s always hard to tell.

oki oki, il do it in maybe 30 mins, imma just finish something up rq

On the bottom of the Krita window there should be an indicator of how much memory Krira needs and it also shows if it’s swapping. Swapping is when memory needs to be copied to the hard drive because the memory is full. Because drives are much slower than RAM and copying takes time too, this makes programs very slow when that happens. 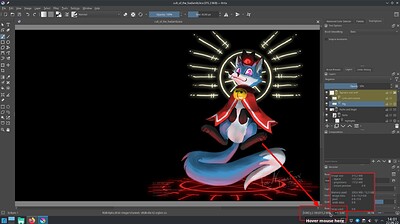 hehe im blind i didnt see the photo attached, what do you mean copying the memory to the hdd

This is done by the operating system you can’t influence that on your own. 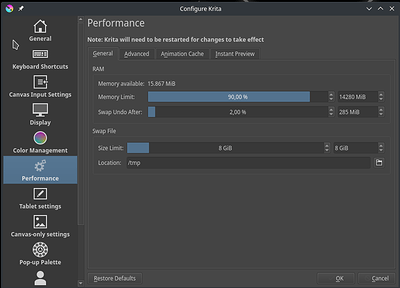 There are several tabs where you can change performance settings.

Keep in mind that even if you allow 100% usage for Krita, other applications on your computer and the operating system itself need RAM too so what actually is available to Krita can be much less. I don’t know much about Mac but on a typical windows installation about 3 GB of RAM are already taken by Windows itself, with not much left for other applications.

It says swap used “14.4mib” is that norm or something?

It shouldn’t swap at all, that would be the best. If it swaps, that means Krita isn’t getting enough memory to work with.

So would it help to quit all apps other than krita? just krita is running and ofc the operating syst

For a while but it has its limits. Either use smaller projects or better yet, install more RAM. My phone has more than double than your Mac. 4 GB isn’t much to run any memory intense applications which graphic editing unfortunately is.

But I guess you can not simply upgrade a Mac.

As a new user, you should be more economical with your posts and instead of double posting, edit an existing post by adding an attachment, if there was no answer in between. The number of possible posts per day is limited for new users but will be increased after a short time, this is a Discourse forum and the limit is to protect against trolls, spammers, etc.

Edit/Add: Just add such an edit or addition. And don’t reply to this informal message, it would be a wasted post should you have nothing important to say.
BTW: You’ll get answers as soon as someone willing to help has time to answer, there is no need for pushing and bumping. This is also not read before the previous message.