Charcoals. Best charcoals ever created for Krita by their community

I did some sketches using most of the brushes and they look and feel pretty good. I may adjust some of them to release more pressure. 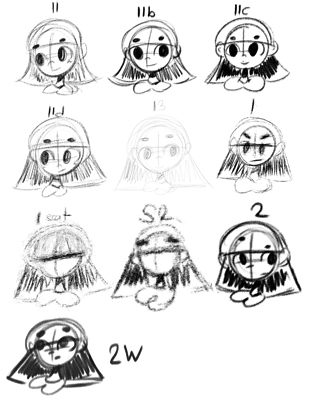 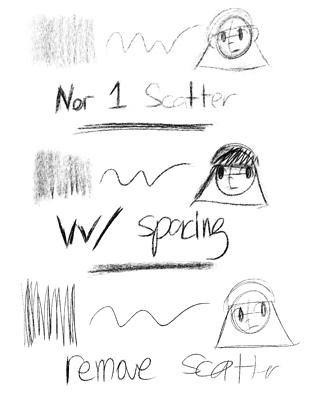 I just did an experiment on the settings of the Charcoal 1 More Scat brush. The sketch test on top is the brush as it is.

I wanted it to produce more “darkness” without me needing to push my pen too hard (I already adjusted the tablet pressure settings of my tablet and Krita before this test) so I added Spacing in the brush’s Flow.

I decided to play with the settings a bit more by removing Scatter in the Flow while still keeping my settings of the Spacing test. Interestingly, it created this dark, thin pen like effect.

While I’m not sure if they actually simulate actual charcoal brushes, I think they are pretty cool so far.

@HappyPinecone nice tests. And if you find something useful for your own enjoy it!, there is no limits when we are creating.
For me is refreshing

. This morning i have been working in the next video for YT and also investigating new ways of pencils for gesture practising. 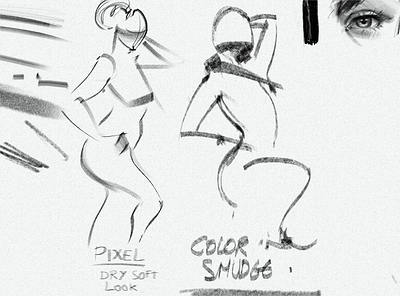 Here are some pencils that I made a few days ago with charcoal, they are not compared to those of Ramón but perhaps they contribute something new, another different point of view. The first charcoal is more suitable for the lumpy texture that is done on textured surfaces, the second pencil is more for drawing gestures and textured strands of hair, the third pencil is random, perhaps it serves to emulate strong textures a bit more. I also leave the links for you to download and try them to see what can be improved.

@daroart37 super nice to see you are making new brushes and sharing them here. I am testing them and they are different.

Let’s go for an easy task. A tilted charcoal pencil to create fast gesture lines. Tilt is needed for best results, but can also be used without tilt . i expect your impressions.
The brush is HERE
image reference to see how this can be used. 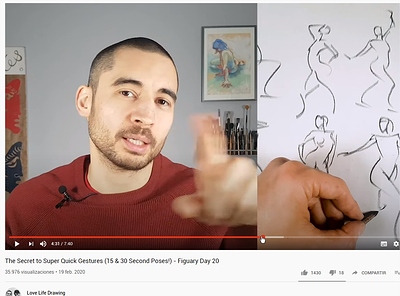 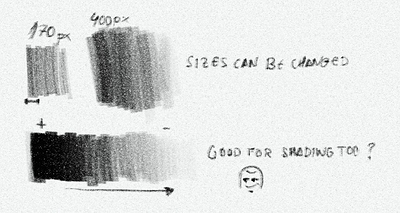 Remember you can test with your own brushtips, or modify parameters. Test for fun! 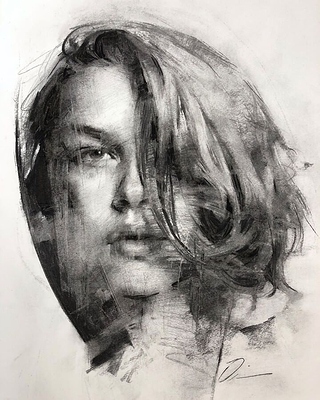 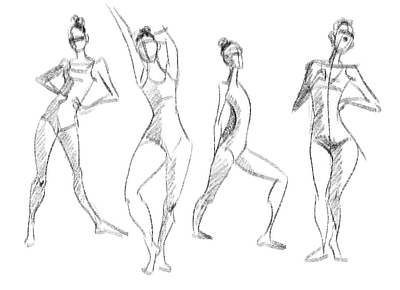 gestos y poses con carboncillo digital959×696 89.7 KB
Here I leave you more tests of the charcoal brushes, some gestures of poses, trying a little. As for the gestures, I made the brush darker and bigger, I also increased the density. The eye I made was an imitation of a charcoal image that I got on the internet, I also leave it for you to compare, I think the brushes go quite well, but in general you have to do several levels, a level of charcoal with a softer lump to stronger, something like pencil HB, B2, B4, B6, the same with the bars. 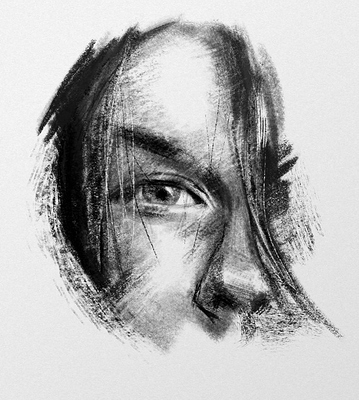 Absolutely WOW. This is what encourages me to refine them even more. Thanks.

The copy is really interesting because I see the brushes used in ways I didn’t explore yet. +1

The week has no ended yet, so you have more time. I agree, is good to have darker values but is a balance between :
No texture- super dark values
Texture with pattern - we lose some values but adds grain. As we are removing some parts I take care of edges to not be so obvious in soft gradients.

I would like to test yours too to see the difference.

Nice brush! I noticed that it is quite slow to initiate. Once it gets going it follows the pen pretty quickly, but when you’re doing quick strokes it can be a few seconds behind.

I tried it out for about an hour. At the end I experienced severe lag and then Krita died altogether. Not sure if it’s the brush’s fault, but it’s the first time Krita has died on me.

I wish it was possible to change the angle of the brush by holding for example alt and dragging the stylus on the tablet. Maybe it is?

Hardly dare showing anything now that daroart has posted his masterpieces, but here goes nothing! 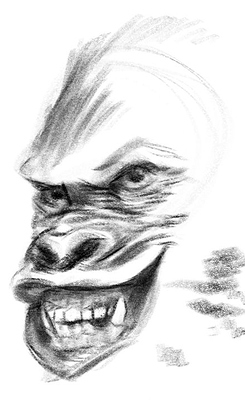 Hi, nice gorilla! don’t be afraid about @daroart37 quality, we all have something to contribute with.
The brushes here start in the moment 0. maybe do you have stabilizers active? i don’t know. The tip for changing angle seems interesting for me too. do you have tilt in your device? About the crash, i don’t know what to say, here no crash yet. and i tweak everything. If repeats, check with another brush and report it.

Please, if you submit a post let me know which brush are you using

in this case i think is Gesture Basic so no problem… 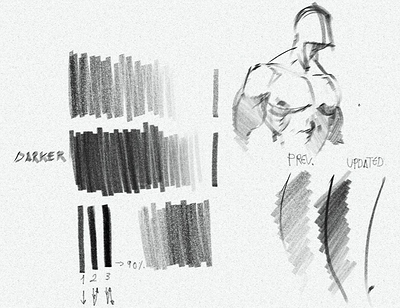 HERE YOU HAVE THE BRUSH

2 days for finishing pencils week. Updating pencils a bit and deciding what is in and out of the pack. Your impressions until now?

Hi. Neat brushes Ramon!
I tried tweaking h)_Charcoal Gesture Basic_V2 to use a square tip and the ratio feature for a more square upright tilt tip. Not sure it’s an improvement or not.

Edit: Also made a version of my go-to sketch brush using the the DA_Paper_Fine Sanded pattern:
https://drive.google.com/drive/folders/1lxdIvJe4LNUZyqd27a63BfkDRvydC3NA?usp=sharing

Wow! Your drawing looks so good that I almost thought it was made with real charcoal and paper!!!

Nice brush! I noticed that it is quite slow to initiate. Once it gets going it follows the pen pretty quickly, but when you’re doing quick strokes it can be a few seconds behind.

I thought I was the only one experiencing the same thing! For some reason I feel a 1 second lag when I start a stroke with one of the charcoal brushes

@Bleke @fizzyflower could you tell me please what is the name of the “delayed” brush? Maybe i didn’t notice. Or maybe is finally removed. Your feedback can help me. Thanks a lot.

@emilm i am testing your brushes. Happy to see your interest to improve things. I need a bit of time for testing now

Sorry I’ve not been much help so far - I’ve had a busy couple of days so not managed to spend much time with the brushes. I did some experiments before but didn’t end up with any presets I was satisfied with.

Generally I really like the effect of your brushes so far, though I do feel like I’m wrestling a bit with them in terms of accuracy and opacity. I’ve noticed with my own preset attempts that it’s hard to maintain opacity once you start layering texture effects. Do you know of any ways to compensate for this? I’ve tried some things like using multiply as the blending mode.

I also encountered a problem with the brushes draining the system resources - I was going to mention it before but it’s complicated and I didn’t want to add more clutter to the thread.

I noticed my system grind to a halt while I was sketching with the brushes on a modestly sized canvas with 2 layers. I checked the system monitor and it showed the ram was completely saturated. It seemed to persist even when I closed the image, but released once I closed Krita. I did a test with the system monitor open and watched the ram usage gradually go up and up.

I think I isolated the problem - it’s strange but seems to be something to do with the patterns. When I first tried the brushes I installed the tips and presets but not the patterns, but I noticed the thumbnails for the patterns still showed up in the brush settings. I also noticed multiple instances of the thumbnail for one of them.

@daroart37 - That really nice work and very convincing with the smudging and brushed-looking areas. I was thinking about trying to make some blenders with a wet-brush look; I’ve always liked that kind of interplay between loose textured areas and refined softer ones.

I think you are right, @Mythmaker. I tried with the system monitor on just now. When Krita has just started with a new document, 5.5 gig of RAM is used. When I paint with any random brush, the memory usage may go up to 5.6 gig. 5.7 on rare and short occasions. When I use h)_Charcoal_Gesture_Basic, memory usage rises with 0.1 gig every sixth stroke. When I change the brush’s texture that problem seems to go away.

And the delay also went away with changing texture.

@RamonM The brush was/is the one I mentioned above.

My device is a Cintiq Companion. The brush tip rotates fine, but some angles are a bit uncomfortable to draw, so it would be nice to be able to change the angle easily.

I like the V2 brush! The memory/lag issue is still there though.

When you say the brush’s texture do you mean the pattern?

The problem I had occured when I didn’t have the patterns installed, and also when I imported them using the resources dialogue. When I deleted those patterns, which were in the .pat format, and pasted the original .png files into the folder (plus a restart) it seemed to fix the problem.

I don’t understand why that happens - maybe it’s something like the presets are trying to reference a pattern that either isn’t there, or in the wrong format, causing… umm… a paradox in time and space… and krita to enter an eternal loop of doom! Yes… that must be it!

Yes, I mean pattern. Sorry, I get confused when there are so many parameters.