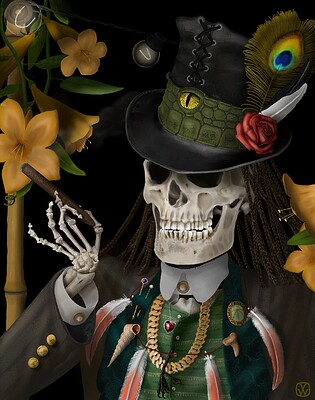 For those interested in process (I am) my process is so slow that I haven’t even tried to record a whole project, but I do make incremental saves, so here is an animated GIF made of those images.

Nice! So many wonderful details! I particularly love that feather in the hat!

The peacock feather, like much else in this picture, was a challenge, unlike anything I had done before. I am a very slow painter – this picture took a record 61 hours according to the Krita-meter – so I have not even investigated recording my work up to now. But I wanted to at least experiment with the recorder, so I recorded the (final version) of the peacock feather. Something went wrong – I have a large directory of captured images, but the video file, though large, was un-watchable, clicking on it produced no result. I don’t know why; I’ll probably look into it eventually.

Ah that’s up in my time-frame area.

Keep up the great work!