Concept art. A story in design

This is a recent post from my blog on concept art and art as a whole (the blog is in Ukrainian and this is a translated version). Just thought, maybe someone here will be interested in such content 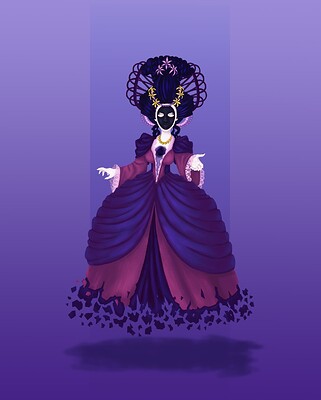 A Story in Design: Moretta

The character I want to introduce to you today is called Moretta. It was made in 2018 as my attempt to participate in Atomhawk’s Into the Void art contest. This name alone evokes a whirlwind of ideas and images in my imagination

The main task was to draw my own interpretation of this phrase and to convey the feeling of emptiness as much as possible with my drawing. At that time, I was actively jumping from course to course, studying character concept art. So the question “what exactly will I draw?” did not even rise. All that remained was to decide on the details. How to convey the feeling of emptiness in the character? What should it look like? I couldn’t just draw a black hole with legs and call it a day

A good idea in such cases is to build a chain of associations. Emptiness - darkness - coldness - silence. Something that slowly draws you in, giving you a deceptive sense of security. Maybe “cold”, dead beauty? This was closer to the truth. Considering that in those days I had problems with drawing male characters

, there was only one option - my “void” would be a pretty girl. But only on the outside. And on the inside - only darkness and cold, which most people do not see behind the beautiful picture. Thinking about her appearance, I decided to collect refs of Venetian dresses and Renaissance hairstyles. I think all those volumes, ruffles, crinolines and ten-story hairstyles with ships and birds work the best for this case (besides, I’ve been looking for an excuse to draw something like this for a long time

). In addition, while I was looking for the right photos, I saw very beautiful carnival masks, which led me to an interesting idea. Beauty without a face is the personification of external attractiveness without internal content. A quick Wikipedia search and I found the perfect solution. One of the masks mentioned in the article was the best fit to reflect my idea. The moretta mask (of course

). It was made of black velvet, oval in shape (to emphasize the features of female beauty). This mask also had one unusual feature - it was held in place by the wearer biting on a button or bit (women wearing this mask were unable to speak). In its time moretta was considered a mask of an attractive mysterious stranger who hides her face and voice. Just like the void that entices and then pulls in without a sound and without warning. Everything else now was simple: find a cool dress, choose a hairstyle. And the main thing - draw the right pose. Moretta is extending her hand to the viewer. As if calling. Tempting. But in her chest, where the heart should be, there is only a dark vortex

Of course, I did not win the competition. Not the right level of skill

However, I really enjoyed the process of creating Moretta. And, actually, the result itself. Despite all the mistakes I made (which is quite enough

). But don’t worry. Rapid artistic assistance is already rushing to the rescue!

I’ve decided to remake this concept. To breathe new life into it, so to say. Also, It would be great to check how much I’ve learned over the years. If you`ll ever decide to “measure” how much your skill has grown, I highly recommend this exercise. It is demonstrative 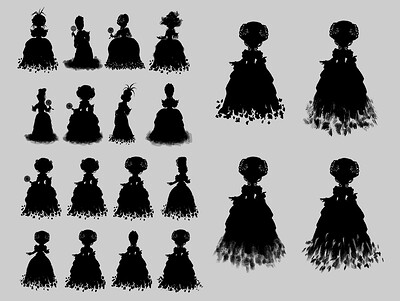 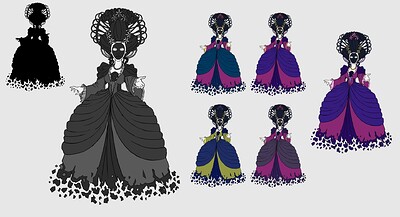