Cougar Study, Any Tips on Simplification?

This isn’t exactly my latest work in Krita as it was created last month. But I figured I’d post it anyway, because it’s one of my favourites. I don’t normally go for this level of detail. I think it looks quite overworked.

Do you guys have any tips on simplification? I’m struggling with it quite a bit! Especially, when working from a reference and when I’m not very familiar with the subject matter! 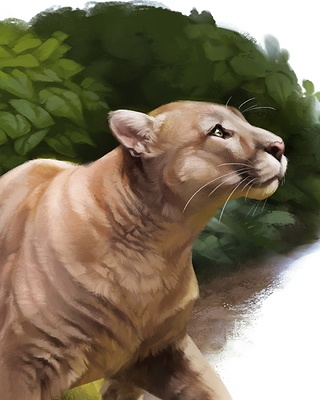 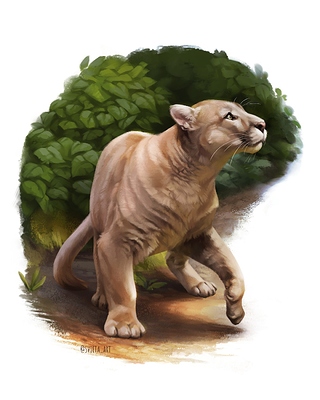 I don’t think it’s overworked - I like the handling; it looks quite painterly and not fussy.

I think it’s quite evenly handled across the painting - that might be something to consider; if you want to draw more attention to the head for example, you might increase the level of detail there, and loosen as you move away from the focal point. There is value and colour contrast against the background - so I can see you’re putting thought into it already.

Looser strokes can help give energy to a painting and help indicate movement, so if the pose is in motion it could help to express parts with broader strokes.

edit: The cougar looks realistically proportioned, so I’ve assumed you didn’t mean simplification as found in character design - Like simplifying and exaggerating shapes to emphasise character?

I agree with Mythmaker and I also think you really caught the weight of the subject, looks ready to bolt. I think the style is fantastic.

I can’t give any advice but I love the way you rendered the cougar! Especially the fur!

wonderful work, I also struggle with simplifying my illustrations and so far I have not succeeded, but I will continue to achieve it, simplifying for me is really a great challenge.

It looks good. Maybe you could explain a bit what you mean by simplification. Do you think you just have too much detail in too many areas? The leaves seem simplified a bit, so seem to be doing it. Are you looking for more of a stylized look where only certain parts are more detailed – and other parts more loose?

Thank you so much! Yes, I meant simplification of rendering, I guess? I think I’m just really precious with each stroke, trying to make them all beautiful and precise. For some reason when I try to paint looser it looks kind of ugly. I’m jealous of people who make it look so effortless!

I’m now remembering I also wanted to make the fur look realistic but didn’t know how to do it without rendering it every detail.

Thank you! I appreciate it

Thank you! Yes, the fur is the star of this painting

I wanted to make it look as real as possible.

Thank you! Yes, it’s tough for people who are used to paint lots of details. I’m an over-thinker which makes it so much worse

Good luck to you with simplification!

Thanks! Yes, I meant there is a bit too many details. I managed to simplify the leaves a bit but I still think it could be pushed further.

I guess what I was trying to ask is how others manage to stay loose and painterly but still make it look both realistic and aesthetically pleasing.

You have a wonderful touch and sence of colour and value, and I love the whole composition. I also love the way you brilliantly used the white space to enhance your painting. Really there is nother to be jealous about. Well done !!

If you want to paint more “losely” , Try using one brush and make the tip size slightly bigger than normal. Paint this way and try to avoid adjust brushes for the details, just let the bigger brush its work and eventually you will start to see results.

At least that is how i look at it because i tend to try to fill in all the detail gaps and struggled to loosen up.

Its very gratifying to have one well placed stroke that makes the picture work without beed of the super details.

That’s my two cents worth.

Thank you so much!

Thank you so much for the tips! Yeah, I’ll try that

I tend to be very impatient in the “ugly” stage and want every stroke to be just right. But I think I just need to get over it and worry about the details only after I’ve had the basic form laid out.

I often find my sketches and thumbnails are more appealing than the refined work - Probably because I focus more on shapes, values and energy; but these qualities are easily lost when I get fussy and focus in on detail.

Regarding fur - I can think of a few artists who handle that well. A couple of obvious choices would be Michael Kutsche and Bobby Chiu - they’re really good at rendering fine detail without it looking overcooked. For a looser approach, I really like how Mari-Liis Kirsimägi handles things - and her style is somewhat similar to what you’ve done here.

Oh, thank you for the link to Mari-Liis Kirsimägi! Her style really is a lot like what I am going for.

I also like Devin Elle Kurtz and Jennifer Gennari. Jennifer’s works are traditional but I think it could be possible to create similar effects in digital painting.

Yes, sketches always have a sort of charm that gets lost when you tighten up the drawing. I think it has to do with the ambiguity. A sketch is more mysterious and “full of opportunities” so to speak.