I’ve looked this bug up and found stuff from 2018 but nothing conclusive or more recent.
I’m on a Surface Pro 6 with windows 10, I have Krita 4.3.0

Using the mirror tool makes the cursor remain as the hand tool, making it hard to do any drawing as you cannot see where the precise cursor is. The bug is fixed with a restart, but is hugely frustrating.

Same here. After I switch to the hand move tool and then back to the brush again everything works as intended.

Just tried it out, doesn’t work for me when I replicate the bug. I have to restart the software. It also seems that although the bug happens occasionally with the vertical mirror tool, it happens almost always with the horizontal one. Weird

yeah, same. This happens frequently in 4.30. I think It’s some kind of keyboard-input-stuck, because after I mashed my keyboard (ctrl, space, other random keys), and tried switching to different application and back to Krita (alt-tab), it somehow fixes the cursor.
sometime, I also happen to unable to change brush mode after commit an undo(ctrl-z).

This is exactly the scenario that a few rare times happen to me. Things worked again properly after I switched to the select shape tool and back to the brush.

I asigned trough “Settings/Configure Krita/Keyboard Shortcuts” “v” as my custom shortcut for the select shape tool. So when the cursor stucks as a hand, i hit “v” and then “b” and things work again.

yeah i’ve tried this a few times, still won’t work for me unfortunately. Only happens after i use the mirror tool and drag it somewhere other than the center of the canvas, and I have to save and restart. Drives me absolutely bonkers. Its always a tossup between “do i want to use the mirror tool or have the convenience of not needing to restart the software”

Hi @HikoryDikory, I have noticed this issue recently, but only while also holding shift+s (which brings up the snap menu). I didn’t bother reporting this before since it seemed to be an extremely obscure case, but your post prompted me to look into this again. From what I can tell, it seems that multiple mouse/pen inputs at once while holding the dividers will lock the cursor icon to the hand icon.

I’m not sure if that’s the specific issue causing your icon lockups, but regardless, I’ve reported it here:
https://bugs.kde.org/show_bug.cgi?id=433285

this is great, I’m really happy to know what specifically is causing it so I can avoid it! I hadn’t noticed the correlation with secondary inputs, just replicated it myself and yep, that’s exactly it!

If you can replicate it then it would be helpful to sign up and log in and set the bug report to Confirmed.

A bug report must be Confirmed before any further work can be done with it.

Simple details about which version and which operating system you tested it with should be provided.
Bug reporting, checking, testing etc is fun

I’ve signed up and realized i have absolutely no idea how to navigate this aaah, i will figure it out and do that though

Open the link provided by @tom above, log in and fill in the Comment box saying you can replicate it on whatever version and operating system, then change it from Reported to Confirmed.

It’s now quite a time a ago since cursor-freezing happen to me. Might have something to do with the fact that I haven’t painted for a while

What I can say is, that this has happen only on my Lenovo Thinkpad running Windows 10 64bit. This is no big surprise since with this configuration it is not even possible to do a decent, simple brush stroke (lag, lag, and even more lag).

I defenetly never noticed any curser freezing from Krita since I switched to Linux.

that isnt the case in my experience.

Still having this issue as well. Tried the alt+tab method and shape selection shortcut method and neither worked but thank you for the direction! Hopefully this will be fixed in further patches

I’ve noticed this issue link got a bit popular so I’ll just say that this issue should be fixed for Krita 5.1 at the very least. Not sure if the fix will get backported to 5.0. 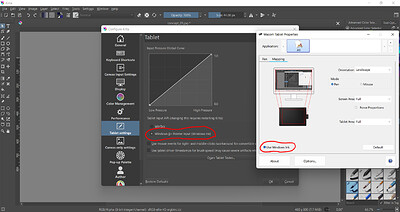 I have checked the Windows ink in both app. It worked for me.