A friend of mine has an Android A7 Lite tablet (running Android 11) and she installed Krita when I recommended it. It works nicely. However, one of the dockers that I told her to show (the Digital Colors Mixer) is stuck, it cannot be moved, there is no X to close it and in the Dockers menu (from Settings) it is greyed out. I don’t know what to tell her.

The other dockers don’t seem to be able to be moved either.

The tablet has 877mb of memory available.

5.0.6 from the playstore on my Chromebook doesn’t have that problem and I assume that your Samsung tablet doesn’t either.
It may be useful to ask her for the system info (wherever that is) to get the exact version of Android and other information which may be useful.

She showed me the system info and it said Android 11.

This is the model 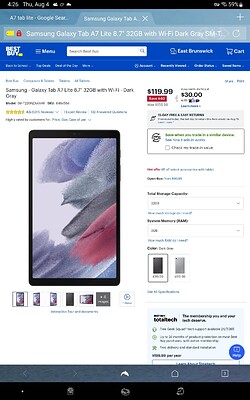 When docker is locked:

It’s grayed in docker list
Because as docker is locked, you can’t remove it

Unlock docker and it should be ungrayed

If I remember correctly, this docker is a python plug-in. However, krita on Android does not support Python at present

No I don’t think this docker is from a python plugin. This was there from a long period of time if my memory serves me right. It was even before python got introduced to krita

Sorry, I confused it with “mixer slider docker”.