So since I already posted this set of rules…

)
How detailed: colored, but not really detailed. If you want, your image can be black&white as well.
My level of art: I’m a hobbyist, but not a beginner. See here: https://www.deviantart.com/tiarevlyn/gallery/
Time to make pictures: Three weeks? Longer than two weeks, shorter than a month

As per rules defined in Suggestion: A new type of contest ("duels") - the first person who answers here that want to take part in this, they become my “opponent” and then we fight using our digital pens

We’ll make our pictures and then send to a person who will be mentioned in this thread later. Then that person will publish both pictures, signed “A” and “B”. Other users then can participate in voting, giving points in those categories:
Rules (Does the picture comply to rules defined above) - 0-10pkt
Creativity (How do you like the idea of the picture) - 0-10pkt
Bonus points - 0-10pkt
The voting system is a bit experimental still. I guess it can be refined later. For now three categories for points so it’s not too much

And then after, let’s say, three weeks of voting (after posting the pictures), the challenge will be closed and the winner will be announced.

How realistic is semi-realistic in your opinion? Can you link an example?

I don’t really think this duel is open anymore, which is fine cause I don’t feel like dueling anyways. But I can’t pass up such a good prompt… so yeah, here’s my take at the prompt; 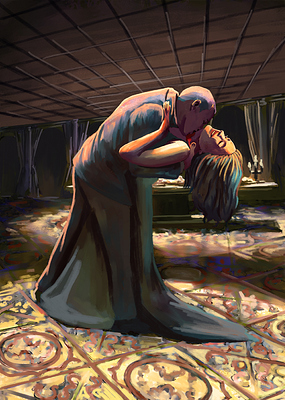