First Krita Beta for Android and ChromeOS in Play Store

First Krita Beta for Android and ChromeOS in Play Store

Thanks to the hard work of Sharaf , Krita is now available in the Google Play Store for Android tablets and Chromebooks (not for Android phones). Read more here.

Thanks to the hard work of @sh-zam , Krita is now available in the Google Play Store for Android tablets and Chromebooks (not for Android phones).

This beta, based on Krita 4.2.9, is the full desktop version of Krita, so it doesn’t have a special touch user interface. But it’s there, and you can play with it.

Unlike the Windows and Steam store, we don’t ask for money for Krita in the store, since it’s the only way people can install Krita on those devices, but you can buy a supporter badge from within Krita to support development.

You can read here the official instructions on getting beta releases in Google’s Play Store. (It’s not hard at all! Just go to “ Early access ” and search for org.krita. Until we’ve got a reasonable number of downloads, you’ll have to scroll down a bit.)

NOTE : if you have installed one of @sh-zam’s builds or a build you’ve signed yourself, you need to uninstall that first, for all users! 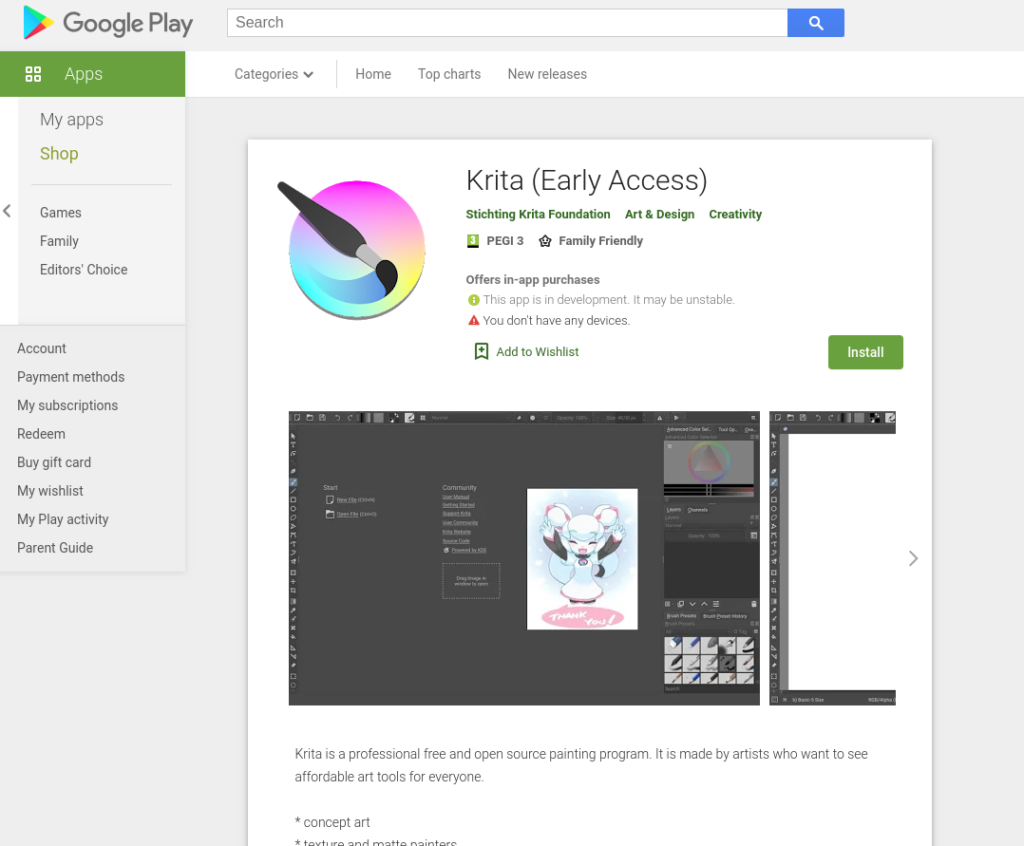 This was originally posted here, https://krita.org/en/item/first-krita-beta-for-android-and-chromeos-in-play-store/

Some android phones/devices have a desktop mode, like Samsung DeX.

I am using Note 9 and had a @sh-zam build installed, which worked fine. The play store listing is not compatible with my device.

Would it be possible to enable support for devices with desktop mode?

well, I took a quick look at the docs. It might be possible, actually!

I’m very excited about this!!!

Is there a way to set Krita on Android to only accept stylus input and ignore hands/palms? I was playing with it the other evening, and couldn’t find an option like this in the settings.

So far it’s really good on my Samsung Tab E and at the same time if it’s cool with any of the developers in the near future for an available port for the SonarPen, It’s a pressure sensitive stylus company that is open for it’s stylus to be compatible for any Android apps like for art or writing and recently I asked them if they would be interested into working with Krita and they emailed me back that they are willing to add support to your app if you’d want in case if no one has an S-Pen (My Tab E doesn’t come with a S-Pen and I recently ordered a SonarPen for my Tab E) and it would be fitting for the SonarPen to be compatible with Krita on a tablet if it would be okay.

This is really amazing. Been trying it out on my Galaxy Tab S3 for a few days now. Finally found a problem. How do you invert selection?

ah, I’m aware that your devices doesn’t have a menu bar. It should be hopefully fixed in the next release.

Hello, I’m unable to get it working on my Android 6 tablet (yt3-x50f stock rom), only get the generic “Unfortunately, Krita has stopped” and that’s it. I downloaded the arm32 version directly as I don’t use the Play store. Is there anything I can do to resolve this?

The only thing I can imagine is that my 1280x800 screen might be unexpectedly slow.

Connected bluetooth keyboard and got to invert selection, but without the title bar, not knowing all the key commands, and this weird German keyboard, it is a little tricky. It works, I will just have to learn the keys for now. Now need to figure out how to get copy/paste between files working.

Update through Play Store worked and I can now access menu bar. Still can’t copy/paste between files. Where is the best place in forums to post issues/requests?

I don’t exactly know what you mean by copying and pasting between files. If you think this is a bug or a wish you can create a new issue with same on bugs.kde.org an example https://bugs.kde.org/show_bug.cgi?id=422058

So the copy/paste thing is this > I open an image(A) and create a new image(B), then I clip something out of image A (this is why I wanted invert selection) and then try to paste it into image B. Nothing happens. I am wondering if this is more of an issue with Android clipboard.

Having some issues with Krita on my 8gb Tab S6. In the previous version of the Beta before the more recent update I was able to open recent sketches I was working on before. After the new update, it’s been impossible to open up previous work and not sure where files are being saved to for retrieval. Only other thing I can think to mention is that occassionally, not all time, there is a glitch pattern that happens with pen and brush strokes. When I notice it, I just quit Krita and restart it and the issue goes away. I must say though that Krita on android is incredible to see and definitely appreciate your awesome work on this. Keep up the great work!

So the copy/paste thing is this > I open an image(A) and create a new image(B), then I clip something out of image A (this is why I wanted invert selection) and then try to paste it into image B. Nothing happens.

ah, yes this looks like something which could’ve been easily overlooked. I’m getting a feeling that this should be easy to fix. But I’m not sure

After the new update, it’s been impossible to open up previous work and not sure where files are being saved to for retrieval.

Yes, this happened as a regression because of the more serious issue that, the files didn’t open at all on ChromeOS. Well, the good news is it has been fixed: https://bugs.kde.org/show_bug.cgi?id=422412 and probably will be in next update.