For my second entry I thought I’d try something completely different. I’ve been reading some webtoons these days and I came up with this idea for the winter season. This one was pretty tough

Full size in my Dropbox

Just remembered I should add in some details on how this came about :). So like I said, I’m reading some webtoons these days and some of the art there is pretty great and I started to wonder if I can pull of a short page of sorts, especially cause we’re talking about a scene in a journey and it isn’t easy to capture that with a single image.

I was browsing images on Pinterest and knew that I wanted a winter scene so what best place to search for winter scenes than the poles? I something impactful cause my first entry feels pretty static so I came up with this scenario with the rescue of a fellow cute animal :). Our cyber-art team does more than art since they have such a big heart.

As for the technical aspect, I did use a few layers, but I almost always start from this custom template I made for myself. It has a few correction & FX filter layers and such since I use them so much. 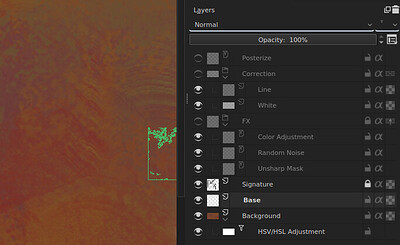 At the top I also have a Posterize filter layer to help me get a good read of the image for composition. I also regularly use CTRL + y to check B&W. I have my soft proofing set to grayscale by default. The cool thing about soft proofing to grayscale is that you can still pick colors from the image and paint away, but see the results in B&W in real time.

The other thing I used that I think is worth mentioning is how I set up the panels to make my life super easy so I can’t paint outside of them, but not over the strokes. You can probably do this in a million ways, but I found that this setup is super simple and versatile.

The Canvas layer is a vector layer to easily adjust the rectangles. But note that the rectangle has just the fill, I’m adding the stroke with layer styles instead (see the Fx icon on Canvas).

So we have just a filled vector rectangle with no stroke and the stroke I’m adding with the layer styles instead.

With that done, I made a clone layer of the Canvas layer, called CanvasClone. So whenever I change something in Canvas, this gets copied into CanvasClone, without the Fx so the stroke isn’t copied. Now all that’s left to do is make a group with the paint layer on top of the CanvasClone layer like in the picture and turn on inherit alpha. Now whenever I paint on Paint layer, the stroke won’t go out of the panel, but it will also not cross the stroke either. And it’s super easy to adjust since all I have to do is change the Canvas layer (and maybe move things around in the Paint layer too). That’s pretty much it