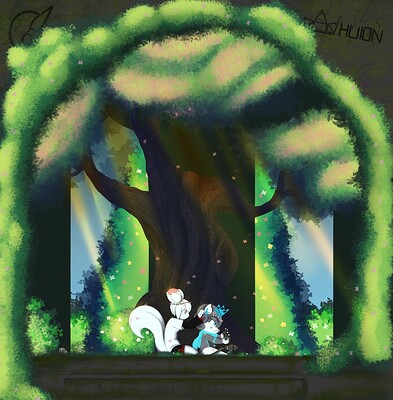 “While adventuring in spring season, Kiki stumbles upon an abandoned place that looks very creepy. The building looks like an old abandoned manor house. Two stories house, three windows have balcony. In front of the house decorated with four big statues holding a vase on their shoulders. Between the statues have windows and a door that was opened slightly from the outside it looks like a haunted house, but for some reason Kiki still wants to go in there despite Leo’s protest. Kiki went inside first leaving Leo behind. She poke her head inside looking around to see two curved stairs that connect in the middle that went upstairs. Future on below the stairs, lead to a big inside garden that was overgrown with vegetation from the top to the bottom of the floor. In the middle there were overgrown trees, the branches and leaves were sticking out. Sunray shining through the trees, making the shadows dance on the floor that was filled with flowers. Kiki and Leo were mesmerized so they decided to stay there for a bit longer to enjoy the moments.”

I have never experienced the four seasons, we only have monsoon seasons in Malaysia. I really want to experience it, because spring is my favorite season out of four. I use Kiki reference in 2015 and Loe I search it up in the internet. The background I use is on Pinterest, I used that kind of background because having an inside garden is my dream house, where you can just relax and enjoy nature without being interrupted by other people.
The references : Krita – Google Drive

I used a paint brush for the rough sketch and finished the lineart with an ink brush. For the leaves and trees I used brushes from Sam Hutchison and then I finish it with a soft airbrush for the sunrays. It took me longer than I expected but I’m happy how it turned out. I’m kinda nervous because I never entered any national competition before so this is my first time. Unfortunately the file was to big to upload it here so I have to use a link (top).

It’s ok to post a link to the original if it’s too large to upload here.
However, you should upload a smaller version in your post.
If you scale the original to 50% and Export as .jpg with a Quality level of 95%, that would be fine for uploading here.

You can edit your first post and put the smaller image immediately after the link to the original.