Glowing Lost - From CYMK To RGB

I would like to achieve the lighting effect of the side panels as in the picture. I did that SO (with KRITA):

However in CYMK; but since the whole project is based on RGB, I don’t know how I can create this glow from inside in RGB mode; If I set the image color space from CYMK to RGB, what should shine white becomes black and hardly shines. 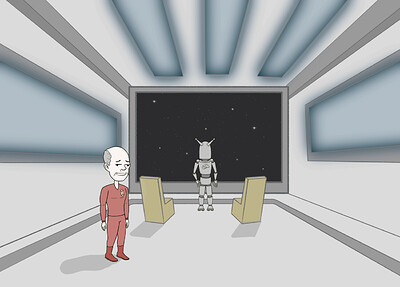 You need to merge all the layers and then convert to RGB.

Btw, are you making stuff for Redbubble or something like that? That told you to work in CMYK and then convert to RGB? That’s wrong; or rather, it’s useful for programs who can’t really handle color management as properly as Krita. Instead of working in CMYK, which is pretty inconvenient to work with (blending modes work differently, color math is weird), you should be using soft-proofing with a CMYK profile. Btw the CMYK profile you should be using is not Chemical Proof, but rather Fogra or… damn, what was the other one

I think Fogra is for European stuff, and the other one for USA, but I don’t remember the name of the other. And that’s only the most common, of course, not necessarily the one you should be using, but I’m only guessing here. Chemical Proof is most probably incorrect though.

… well, I accidentally used CMYK. Tried it around until I found a solution to make something glow.
Now I would like to know how I can achieve this effect in RGB. Very often and in a large number of files - not just once to convert.

It’s about backgrounds for a sci-fi series; Numerous lighting effects are to be used here.

First of all, you should create your other files with sRGB profile from the start. Converting back and forth will almost always lose or change some colors.

Making things glow is much harder than simply setting a blending mode, when you want to make it convincing. However if you want to keep you current workflow then set the blending mode of your glow layer to something like Color Dodge, Hard Light or Screen (to name just a few from the top of my head) depending on how strong the effect should be. There are different blending modes that give a “glow” effect in sRGB color space but you most likely need one from the Lighten category.

However as mentioned a convincing glow effect also includes adding shadows and highlights on other objects depending on the light sources and their color.

I have a project with 8 cartoon characters, consisting of a total of 600 layers for the lines and 600 layers for the colors. Created in CYMK (without knowing what it is).
The file in which I specified the colors for the figures is in RGB. I only found out that the color levels of the figures are in CYMK when I was about 75% finished. So I converted all the figure layer-files to RGB and colored them again. Now I know the difference between CYMK and RGB :).

The picture inserted above is also from a CYMK file; I tried it around until I achieved the desired light effect (rays from the inside out). I want to beautify the background of this sci-fi series inflationary.
Now I’m back to zero, because I have to work out again how this or a similar effect can be achieved “in” RGB.
If that is the case that there is no known solution for this, I just have to find out for myself:
How many levels, how strong the opacity, what effect (radiant light fits very well, so far).

What is “Lighten 2”? I work with the German version of Krita, there is nothing that reminds of Lighten 2.

*** “However, as mentioned, a convincing glow effect also includes adding shadows and lights to other objects depending on the light source and its color.” ***
→ It should be quick and easy, as I have to create a large number of backgrounds in a very short time. Like in my picture above it would be very good!

Thanks for the help!

I think you misread this. It’s just a link to the manual and the number is how many times people clicked on it.

Unfortunately I don’t know how the blending modes are called in the German translation even though I speak German.

@Nachtgold:
And now I have turned the link into “Lighten 3”.

@Takiro: For this reason (and for the reason that Krita is relatively new for me) I run a version for German and English respectively, it makes it easier for me to occasionally discover a function or to be able to follow or support others in the forum.

I’m sorry - read the message in german - by using google-translator. So I missed the link to the Krita-manual (I’d discovered it already and did not find a solution).

I’ve now worked out a solution: