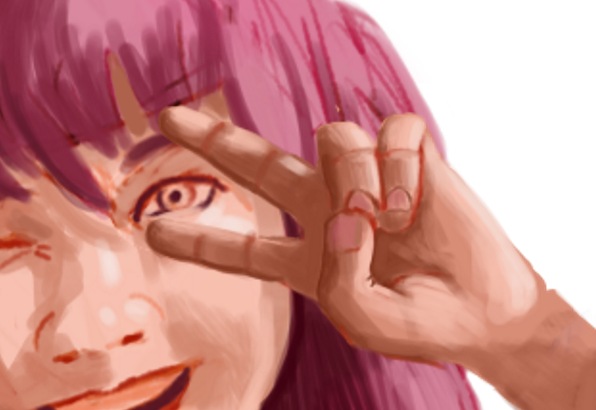 Many problems with this image.

But what I’m really struggling with now is separating the hand from the face while it still looks like they are lit from the same source. The hand is supposed to be four or five cm in front of the face.

Ideas or pointers to tutorials or references would be much appreciated.

You’re doing a great job, tbh, with the colours, anatomy and composition overall.

All I can see is to slightly define the darker edges of the hand more, where there is any crossover, and to slightly darken the more shaded areas of the palm.

Lightening the hair’s lightest pink could help too; the nose is catching the strongest light, so some brighter highlights in the fringe could help … the index finger has more constrast than the middle finger, so lightening the area behind that could work well. Some stronger highlights on the fingernails and knuckles/hand edge on the right could pull the hand further forward too.

I feel like your tones are too far apart - the hand looks very dark, and judging from the direction of the light, it should be lighter.

this image looks like it was outside, has some blue tones - but you can see how close the face and hand are in value and color.
https://www.pexels.com/photo/man-in-black-leather-zip-up-jacket-showing-peace-sign-953720/

I’m not sure what environment she is in (outside or inside), but i would start by lightening her hand. If she is outside, you might add some light blue tones to her hand, if she’s inside, maybe some reds. if i were to paint this, i would probably lighten the hand and add some more saturated reds towards the finger tips. The tones/colors in the hand and face can be very close, and the middle section of the fingers could have very soft edges - barely defined - but the eye of the viewer should fill that in for us if we ensure the finger tips and the hand are defined enough. I hope you don’t mind, i did a quick paint over to show what i mean. 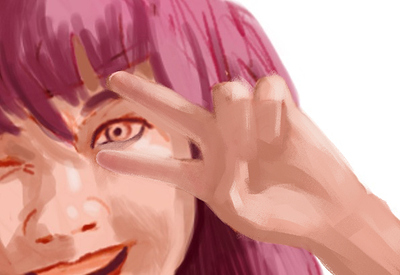 If i were to push this a little further, i would add some more colors to her face and possibly darken some of the areas the fingers tips are in front of just to bump up that contrast and edges a little more. 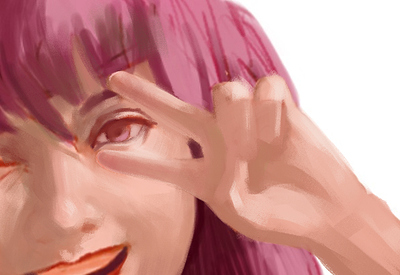 @stitchpunk Thanks! The jury is still out on the blurring thing, but you got my wheels spinning again.

@kynlo The hand got darker and darker the more I tried to make it visible. But maybe I was too concerned with that. Your paintover looks really good!

Thank you both, this helps a lot! I won’t have time to work on it for a day or so, but hopefully I’ll be able to post it some time next week.

I look forward to seeing what you do with it whenever you get time to work on it further.

Inspired by kynlo doing a paintover, I hope you don’t mind me doing that also. 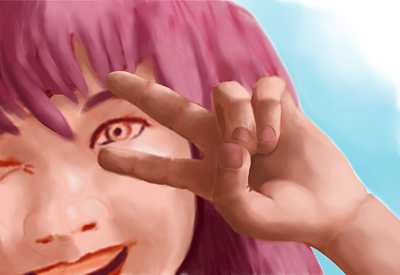 Lighter smoother hair makes for a more uniform look, contrasting with the different and detailed rendering of the hand. (Different textures generally give good contrast.) Stronger contrasts added on the hand and wrist. Blur on the little/ring finger knuckles; I realised while doing that that blurring only the edges of the hand wouldn’t have worked! Blended the face more, to contrast with hand detail also. Adding the blue sky, as an example of how that again provides contrast; previously any hand highlights were getting lost against the white.

Often things in the foreground have more detail, unless softening (as kynlo has) or slightly blurring, to make the face stand out more (‘camera effect’ where something blurs if very near to the foreground), in which case more detail on the face would help that method a lot. Another rule of thumb is that often things get lighter the more far away they are, and warmer foreground colours become cooler.

Toyed with if it was possible to add any shadows falling on the face from the hand, but not sure if the angle of light would cast any shadows … always makes things stand out a lot if can put in a cast shadow or two.

I couldn’t do every detail, e.g. working over the rest of the orange linework, but it’s such a good composition and was a lot of fun. I hope any suggestions are helpful. Thanks for posting it!

Can’t help, but the geometry of the hand does seem a bit off to me, which I think is part of the shading issue too.

Not only is the index finger too short (unless it’s supposed to be quite a bit bent or angled and the shading just doesn’t show), but the pinky and ring fingers are way too angled IMO, I can’t bend my fingers like that.
The thumb also looks twisted and doesn’t really have the proper segment proportions, so I have a hard time deciding how much turned in you wanted it to be.

Here’s my attempt at fixing the hand, didn’t spend too much on shading but more on the shape: 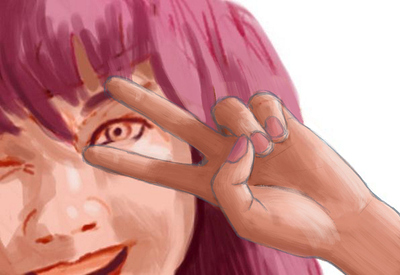 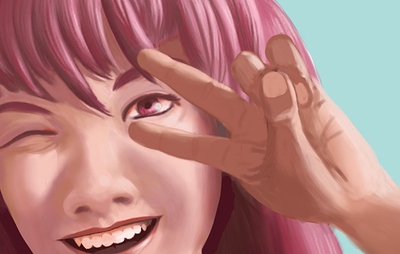 Says “can’t help”, then proceeds to help a lot…

Thanks again @stitchpunk and @Lynx3d! Sorry for not writing more, but it’s two in the morning and I have to be at work in six hours.

Says “can’t help”, then proceeds to help a lot…

hehe…I guess it has to be “can’t help it” in english, as in, “no matter how I look at it, the impression stays”

Anyway, nice progress on the head, and I can now see better how the hand should be. Because I want to improve my skills too, I gave it another try, bending the thumb more towards the opposing fingers is quite a bit harder to paint, but I guess I learned a lot from it

Here’s what I ended up with: 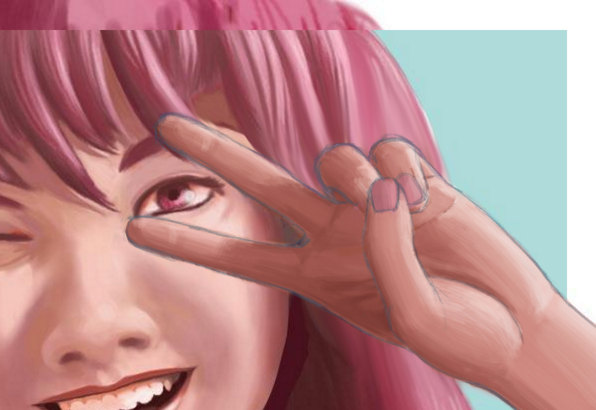 I’d held back from changing things a bit more, but Lynx3d is right about the hand. Just tried to mimic the pose in the painting, and it is a little difficult. With the peace sign, the thumb does go more diagonally across the fingers. Some refs that may help with sorting out the hand details: 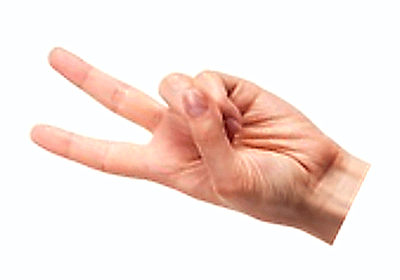 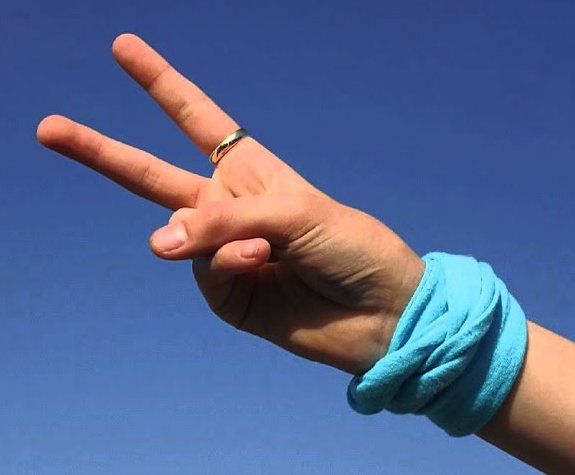 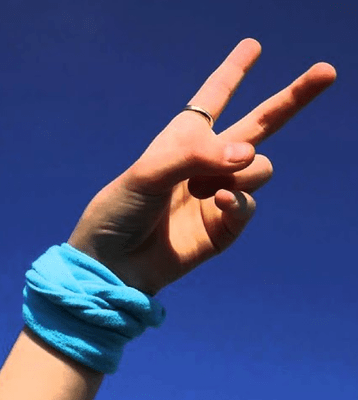 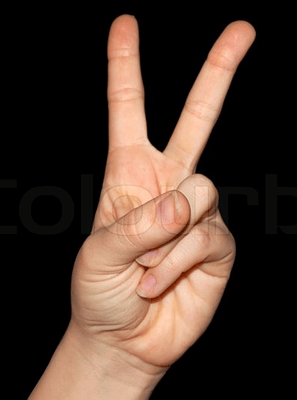 The first was a very small image, so, as well as rotating it, I’ve tried to upgrade/sharpen it, but the other 3 refs also can be rotated/mirrored and show the thumb more diagonal. Always good to test out the pose, and try to get a photo e.g. of your own hand (this particular one is a tough one to photograph yourself btw, lol), and look up a variety of refs.

Because I want to improve my skills too, I gave it another try, bending the thumb more towards the opposing fingers is quite a bit harder to paint, but I guess I learned a lot from it

It makes me happy that you got inspired to learn something from this thread!

Your first attempt is fine, but the way you drew the thumb in the second image feels more natural to me.

I’d held back from changing things a bit more, but Lynx3d is right about the hand.

Feel free to change anything you like in my drawings. No need to hold back!

I feel I have been bad at replying in this thread, but rest assured that I have considered your input. I have used some of it and less of other things. I like your paintover, but I think I’ll have to agree with Kynlo that you shouldn’t go overboard with the difference in value.

My conclusion is that both my background and foreground was too busy. Using tight value ranges and smooth transitions seems to be the solution to my initial problem.

Thanks for all the hand references! Is any of them your hand?

Thanks for assurance, and that’s the great thing about feedback; you can pick what resonates best with what you’re painting. Great that you’re getting so clear about things; sounds good!
And no problem about the hand refs; it was fun finding them, plus some luck, and I was pleased to find some refs that really ‘fit’ with your painting. None of them are my hand, although my hands are very similar.

Fun to paint the refs too!

I look forward to seeing how your painting progresses.

@stitchpunk I did an experiment with blurring the hand. Interesting effect. You get a very shallow depth of field if you try to emulate a real camera aperture, but yes, definitely a tool to save in the drawing toolchest for special occations!

Good job! Yes, just blurring the foreground or background, one or the other of those or both, as you have, really makes everything else stand out. Her face stands out loads more, and the technique also draws more attention to the light and contrasts on her face. You’ve done it really well. Glad you have a new fun tool for your toolchest!