I’m not sure I have an answer for you. But I thought it would be worth clarifying a few points to make sure everyone is on the same page, to help those who would like to help you.

Refraction is when light changes direction as it passes through materials of different, or varying, density. Think of something like background objects being distorted by a water glass set in front of them.

Considering you mention speedy cars, I would imagine what you are looking to simulate is something along the lines of motion blur, which is when a camera captures a subject in motion that is faster than the shutter speed, causing a smearing of details due to some ghosting where the subject gets continually exposed to the film/sensor over a given stretch of the frame.

Also you should let us know if this is in regards to a single still image or for animation. Considering you kept saying pictures in the plural sense, I’m going to hazard a guess that you want this effect in animation over a series of frames.

It sounds a bit like @Hyung_Gun_Cha actually means the effect you get in long exposure photography.

Yup, that’s motion blur, and my best guess at what they are after as well. How it’s handled depends a lot on if the desired output is a static image or an animation though.

Something worth pointing out as a starting observation though is that a lot of artists intentionally do motion blur wrong, where they keep the front of the subject crisp and clear, and only add the smear along the back. It looks neat and dramatic, but not really all that realistic, unless the subject was slowing down to a halt at the time the photo was captured.

Something moving at a steady pace will be fairly evenly blurred along the front and back. Something accelerating would have more blur at the front actually. And as mentioned already, something slowing down will have more blur in the rear. But this is all only important if you value realism over style. An alternative to blur is going with comic book style speed lines, where you just add lines trailing off the back side to insinuate the direction of movement.

The Art of the Smear: Breaking Down a Secret Animation Trick

How do you animate movement without drawing every step frame-by-frame? Animation smears, the optical illusions used on Spongebob and The Simpsons. 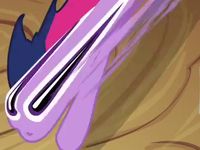 Can you please screenshot the exact moment when those refractions appear and point it to us? It’s hard to determine what exactly you’re talking about - at least for me since English isn’t my first language, maybe I misunderstand what “refraction” is.

gosh are you kidding me?..
i mean when the car is racing man…

There are several effects that can be seen during the racing there, none of which can be considered refraction.

i mean the refraction, when the cars go in the rocket car mode. Like when the cars go quick, the picture of the game become shaken and it looks deam look rather than the neat show by the speed.

In physics, refraction is the change in direction of a wave passing from one medium to another or from a gradual change in the medium. Refraction of light is the most commonly observed phenomenon, but other waves such as sound waves and water waves also experience refraction. How much a wave is refracted is determined by the change in wave speed and the initial direction of wave propagation relative to the direction of change in speed. For light, refraction follows Snell's law, which states th...

Just as a matter of interest, there is an example of refraction at 3:03 - 3:08 with the toggling circular/spherical light bending effect overlayed on the inset image. (I really need to get a life.)

During the race, the surrounding track structures and trees become blurred and streaked and there is a vignetting effect at the bottom of the picture. I think this is what is meant by ‘shaken’ and ‘dream’.

I was impressed by the shockwave effect at the front of the cars which really is well done.

It would have saved everybody a lot of time and effort and saved you a bit of time if you’d said that in the first place: “at 3:03”.
Also, that has nothing to do with the cars going into race mode.

I suggest that you try the GMIC filters at Filter -> Start G’MIC-Qt and then open the Deformations group and try the Distort Lens filter.

You will probably need to use multiple layers and transparency masks to localise the effect. This will require thought, patience and planning.

Yea so how do i make the picture that’s exactly same as the picture in the video 3:03 in Krita?

Yeah, you know, when i did the distort lens filter, the picture got curved.