I Had A Dream (NSFW for Serious Content + Discussion) 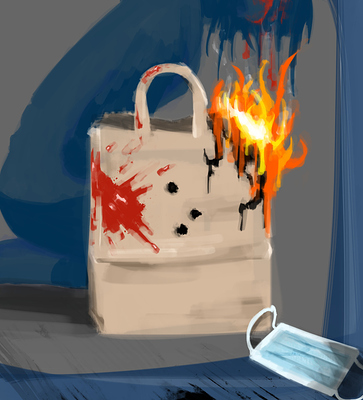 paperbag31000×1100 232 KB
A teenage woman was shot in Dallas, on her way home from the grocery store.
A rubber bullet, from a cop, that nearly took away her sight.
There’s protests with people lined up against the gate to the White House, and the President responds by threatening the military.
Another few have died from police intervention, I’ve seen the pictures and videos of blood pouring from their wounds, the cars that nearly run over protestors, the shots fired at people standing outside their homes.
You could say this is both my art piece response and a rant, as I can only sit and hope that the next news I see isn’t one of the consequences of military action.
There’s the virus, that still refuses to fade as the people stay steadfast in heading to beaches or pool parties by the hundreds.
The economic collapse and expenses… hearing the individual costs listed out of my grandfather’s hospital visit after getting into a car crash, and again only hoping that the insurance covered it enough.
… maybe if I sit back, and breathe… I’ll wake up somewhere better.
4 Likes
Jeremiah August 21, 2020, 9:53pm #2