I have gone a month without much progress... this has been WIP for so long now 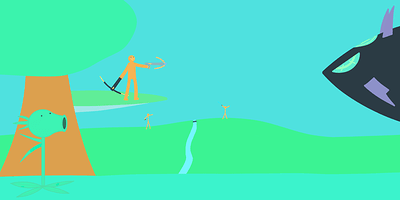 The person with the crossbow needs somthing to be aiming at? A giant worm with teeth or a blood thirsty rabbit. Not sure where you want to take it.

He is aiming at the GIANT EVIL AIRSHIP.

Ok, thought the airship was his… My mistake. Maybe a barbed spinning arrow to rip a big hole in it?

The airship and “person” (monkey) are from Bloons Tower Defense, though most people don’t know what that is.