Fully integrating timelapses into the krita file itself would fix multiple issues and allow for easier development and control over the feature.

Here are several things which could be accomplished by saving timelapse data in the file itself:

It may also come with some downsides:

Alright this sounded better in my head, I just checked one of my recording folders for a single picture and realized it was 15GB. lol 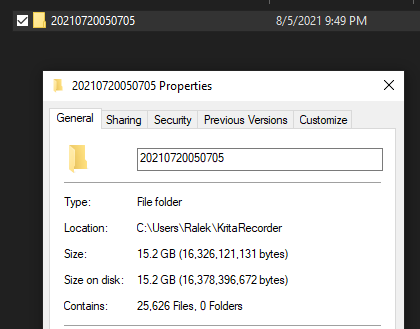 Some sort of frame difference compression algorithm would definitely have to be implemented if this was done.

I agree some work should be done with the timelapse recorder though i really do not like the idea of storing the snapshots inside the kra file. As you pointed out it can bloat the file a lot. That’s one thing i already dislike in CSP timelapse implementation.

The settings for recording on/off being stored in the file however sounds completely reasonable and i think it would be a good improvement on the feature.

Improvements on the export would be a good addition, there are already known cases of adjustments that could be easily made into the options like “don’t stretch the image if the canvas size is changed” and pixel art recording.

The undo id would be a real improvement i like the idea. Though i really didn’t understand the zoom and rotation part.

Personally i like your idea of having it stored in a separate file, as it wouldn’t bloat the krita file. I remember someone made a thread of a image format that was very small but kept quality that could be useful for saving the timelapse.( Found the thread Any plans to support the .qoi image format?)

Right now the PNG format is unusable if you have a long timelapse unless you want to have a 90 gb folder. Which leaves us with jpeg and at 80% quality seems like a good compromise to me but would be nice to have more options that could reduce disk space usage.

Having its own file format i think it could bring improvements to link it to the kra file as right now the link between folder and kra file seem to be easily breakable.
One thing i would find interesting is that if you change the name of the kra file when you open it krita could check if there was a timelapse file for it and relink it if the original name of the file was kept somewhere in the kra file.
I honestly don’t know how this is handled now with the timelapse but i think it’s more fragile.

For the timelapse file itself i am unsure if a SQLite database could be useful as i think that’s how clip studio stores it or a zip file like kra could be used, the images would also need to be stored somewhere before being zipped.

Sometime ago on the discord server, I talked about having small portions of the recordings converted to webm on the go to save space. For example if you have 000.png to 010.png on the next screenshot 000.png to 008.png would be converted to a small webm clip (or any other video format) this way there is no need to store entire sequence in png or jpg which adds up space (unless of course the user specifically wants a sequence) In the end all those clips can be merged in to one single video.

Would there still be an option to use the sequence of images?

I’d imagine that if you wanted a series of images, Krita could have a function to export the highly-compressed timelapse file into png’s or jpg’s. It’s going to have to have that functionality for ffmpeg input anyway.

(unless of course the user specifically wants a sequence)

Yes I wrote that if user wants it can be a sequence. This is just my suggestion/idea it is not going to be like that

+1 for not storing in the kra, but the on/off feature could be useful for people.