Good morning everyboday.
I quickly want to report this.
Krita deserves better rendering performance, especially when sizes
get bigger. There’s like a rendering glitch showing tiles with big brush
strokes or when you fill your canvas with color. We wouldn’t mind if
it was changed for the better. If these tiles help for speed in the rendering,
let the glitches vanish completely on the visual side.
We hope this, in addition to other things to optimize are on your roadmap.
Thank you all for your hardwork.

We wouldn’t mind if
it was changed for the better.

Please go ahead? You’ve got the source code, you can do it.

I don’t know, it works well on my machine. Although I agree that performance could be better in some cases, like with smudge brushes. What are your computer’s stats and have you already allocated more resources in the Krita settings?

Hmm, ~450px brush unless it has some blending (is it smudge engine?) should I think work fine. At least it does for me event on larger canvas sizes.

Since it looks like windows machine, did you try switching the renderer (opengl <-> angle): Settings - Display - Canvas Acceleration [make sure acceleration is ticked])?

I think from brush the part that works the slowest are smudge brushes for blending, I recall not so long ago one of the dev confirming it’s not utilizing multiple cores (CPU) or something similar.

What’s the canvas size?
Are you on nvidia GPU?

I know, but it would require my life. Too many things to learn before I could do a change. Plus I’m not a developer even though I learned a bit of code in a certain past. Was years ago though.

Here are my Krita settings. 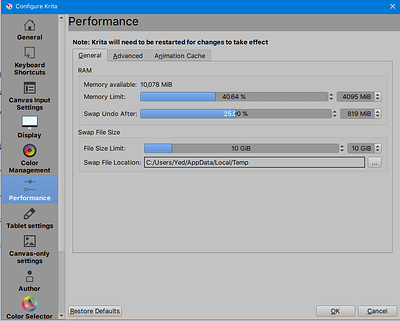 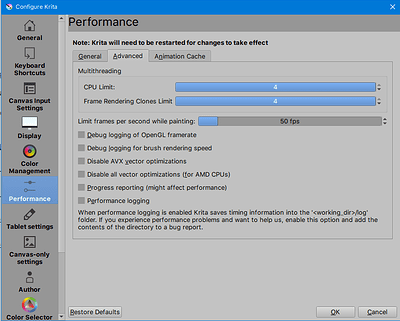 Yes I was on Nvidia GPU(Nvidia GT 640M).
Whether I use ANGLE or OpenGL, the same thing happen.
Canvas acceleration is obviously on, performance matters so this has to be ticked on. Which
was the case.
Canvas size is 2976x4075 pixels.

Because you don’t have a too large canvas and you dont’ have a too large or complex brush there.
This might be just a need in upgrade of a computer rather than krita. (your processor is 9 years old mobile unit so that might be the reason of your troubles together with memory sticks)

With these settings I can go on my (definitely not a new machine ;)) go with a double size of a brush pretty much fine.

(just in case, in you nvidia settings turn off triple buffering and vetical sync off - at least I think it’s these options that sometimes give troubles with nvidia drivers)

Yes, I agree that’s probably the hardware, maybe also driver related. Krita’s brushes and anything related to calculating of pixels and applying them to the canvas is done by the cpu not by the gpu. This has been discussed several times, even on this forum. It’s because the time it takes to copy all the data to video RAM and back offsets the speed gained from the faster gpu processing.

My current system has 24 cores and has no problem handling a basic pixel brush of that size, not even my older 8 core cpu from five years ago. I have a powerful workstation because I also do 3D modeling and rendering but graphics application are usually very hungry for resources in general, depending on the scale of works. Not saying you need a high end cpu for a basic brush but maybe at least not hardware from a decade ago.

However, I just checked on my old laptop with Intel i7-7500U Quad Core. No issues until the brush is somewhere around 700px. So maybe it could be a driver or OS specific issue? I’m on Linux.

I will reiterate that this aspect of Krita needs a good rework.
Because, well, when I work in Clip Studio Paint 1.9.11 or Photoshop 2021, this issue doesn’t occur at all. These kinds of glitches don’t occur in Autodesk Sketchbook Pro 2020 or an up to date Medibang Paint Pro app as well.
I understand the codes are different for these applications, but, comparison matters. And I compared, and so… Krita definitely needs some rework on that part.

Are you sure krita is utilizing your nvidia GPU and not your intel integrated graphics? 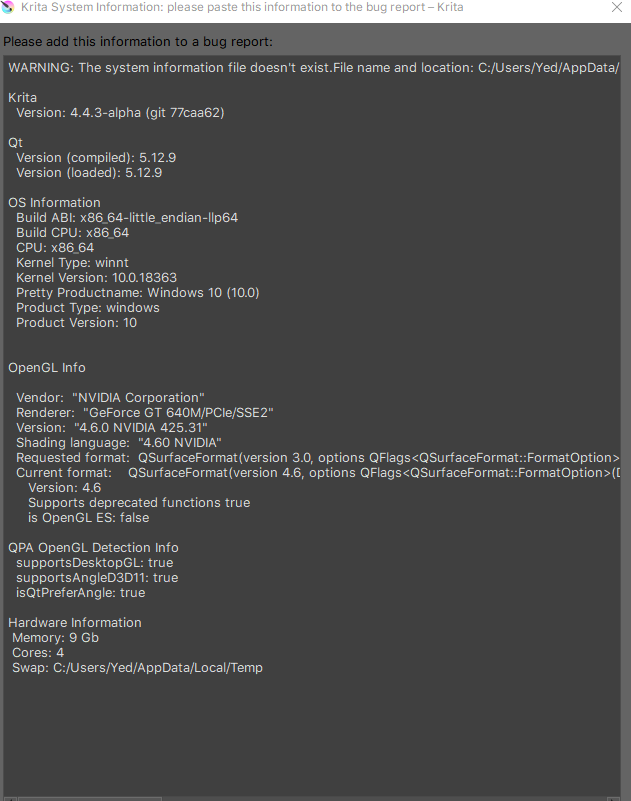