Kiki and Leon Having a Snow Sculpture Contest 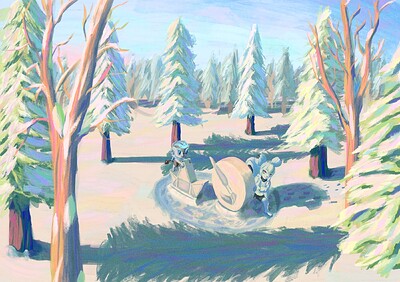 4seasons_v2_compressed2200×1555 745 KB
Since I use a Huion tablet to draw and mainly use Krita I thought I should submit to this contest.
The idea behind picture is pretty simple: Out on a walk during the winter Kiki and Leon decide to compete in building snow sculptures. I thought of it when me and my sister build a snowman in the garden and went out on a walk during winter.

As for the process: I started with a sketch to see where and how big I should place the elements and to figure out how to draw Kiki and Leon. Then I layered in the main shapes while making use of layers just to separate some of the edges.After that I painted in the core shadows. At last, I wanted to add colour variation all over the picture. The 2 brushes I mainly used were both from wojtryb’s “Won’t teach you how to paint” brush pack. They are called “02a square DA impasto” and “02a square DA impasto pat”.
The designs are kind of a mix of different official ones. They should just be simple enough such that they work at the relatively small size. I also tried to keep the styles relatively the same, since I don’t really have a specific personal style, especially not for things I am not used to drawing.

I have never drawn any characters similar to Kiki and Leon, and it was also the first time that I painted a scenery, so I hope it came out alright. And I hope that the snow sculptures count as implementing the Huion and Krita logos, despite them being discoloured here.