Despite an extra-long beta period during which we got awesome feedback from our community, 4.4.0 was released with several regressions, that is, bugs that weren’t present in 4.3.0. So today we’re releasing Krita 4.4.1

Despite an extra-long beta period during which we got awesome feedback from our community, 4.4.0 was released with several regressions, that is, bugs that weren’t present in 4.3.0. So today we’re releasing Krita 4.4.1 with the following fixes:

If you’re using the portable zip files, just open the zip file in Explorer and drag the folder somewhere convenient, then double-click on the krita icon in the folder. This will not impact an installed version of Krita, though it will share your settings and custom resources with your regular installed version of Krita. For reporting crashes, also get the debug symbols folder.

NOTE for Windows Users: Microsoft has changed the way applications signed with certificates are handled. Only Digicert certificates are automatically trusted, other certificates will only be trusted if enough people bypass smartscreen to run the signed application. If you see the “Windows protected your PC” screen, press “More Info”, then select “Run anyway”. The more people do this, the earlier Microsofts machine learning algorithm will learn Krita is perfectly fine.

(If, for some reason, Firefox thinks it needs to load this as text: to download, right-click on the link.)

Note: the gmic-qt is not available on OSX.

This time, the Android releases are made from the release tarball, so there are translations. We consider Krita on ChromeOS and Android still beta. There are many things that don’t work and other things that are impossible without a real keyboard.

Krita is a free and open source project. Please consider supporting the project with donations or by buying training videos! With your support, we can keep the core team working on Krita full-time.

Only a little later than we had planned, this is the next feature release of Krita! With a whole slew of new fill layer types, including the really versatile SeExpr based scriptable fill layer type, exciting new options for Krita’s brushes like the gradient map mode for brushes, lightness and gradient modes for brush textures, support for dynamic use of colors in gradients, webm export for animations, new scripting features — and of course, hundreds of bug fixes that make this version of Krita better than ever. Especially exciting are all the fixes we made for Krita on ChromeOS and Android!

Here’s an extract from the full release notes:

This release brings a lot of updates and changes to fill layers.

Fill layers can now make use of multi-threading. This means that if your computer has multiple cores, Krita can subdivide the calculation work for making fill layers between them. This makes fill layers a lot faster.

Transformations for the pattern fill

The patterns of fill layers can now be transformed, allowing you to amongst others, rotate the patterns. This has also been implemented for the shape drawing tools and the bucket fill, and had been long on the to-do list. 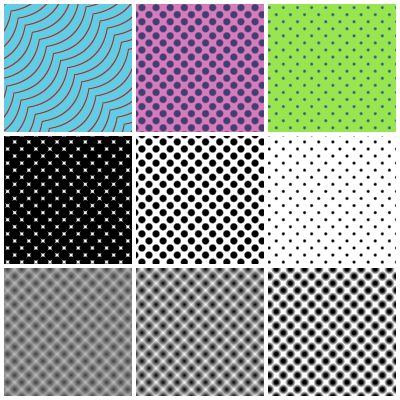 A new fill layer option specialized in filling the whole screen with dots, squares, lines, waves or more. This fill layer allows you to quickly generate the simple pattern you need on the fly, which is very useful for those doing comic book illustration or similar highly graphics styles.

A fill layer that generates, among others, Penrose tilings, as well as Quasicrystal structures. The results are rotationally symmetric, but aperiodic, meaning these rhomb patterns don’t repeat themselves.

This filter was inspired by the next item on the list… 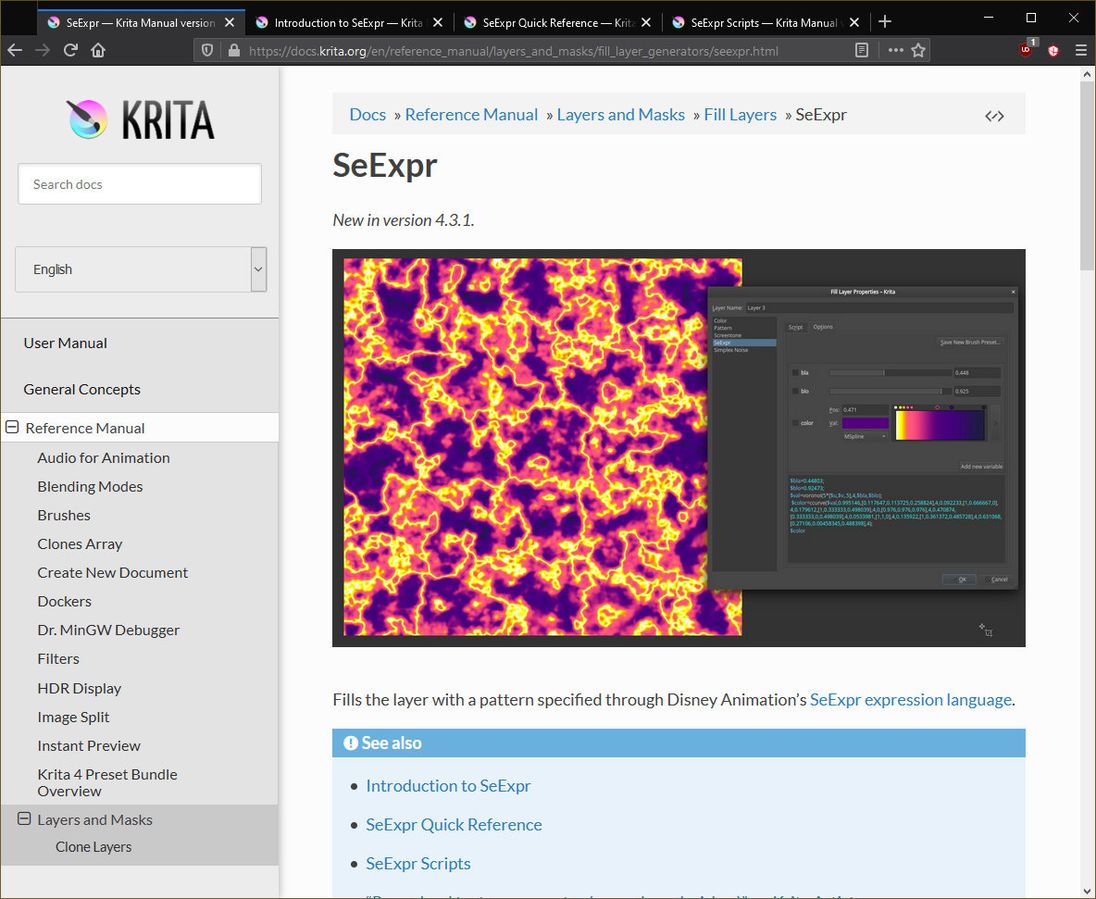 Amyspark’s Google Summer of Code project, the integration of Disney Animation’s SeExpr expression language. SeExpr is in effect a tiny shader language that is used by Walt Disney Animation Studios itself to generate textures and materials on the fly for their animations. Within Krita, this allows you to code your own fill layers. We’ve also tried to come up with a good set of defaults to work off from and included them.

Following the addition of the lightness mode in 4.3, this release sees another round of features for the brush engines. 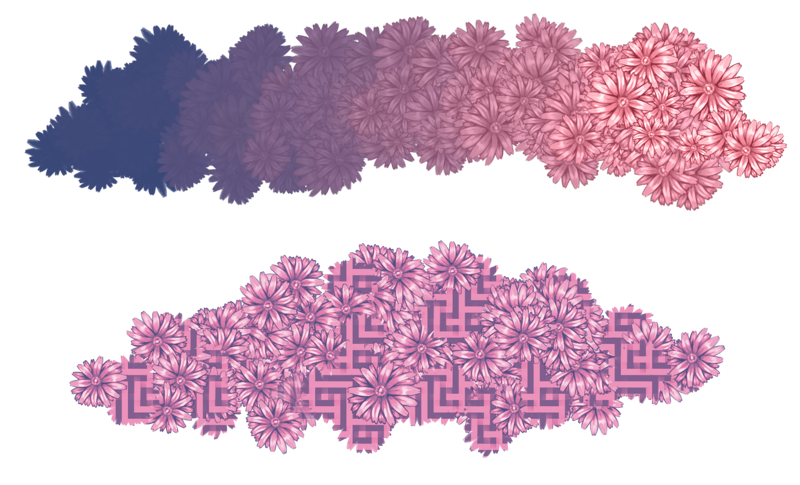 Diagonal lines allow modifying lightness and saturation of the currently active color at the same time. 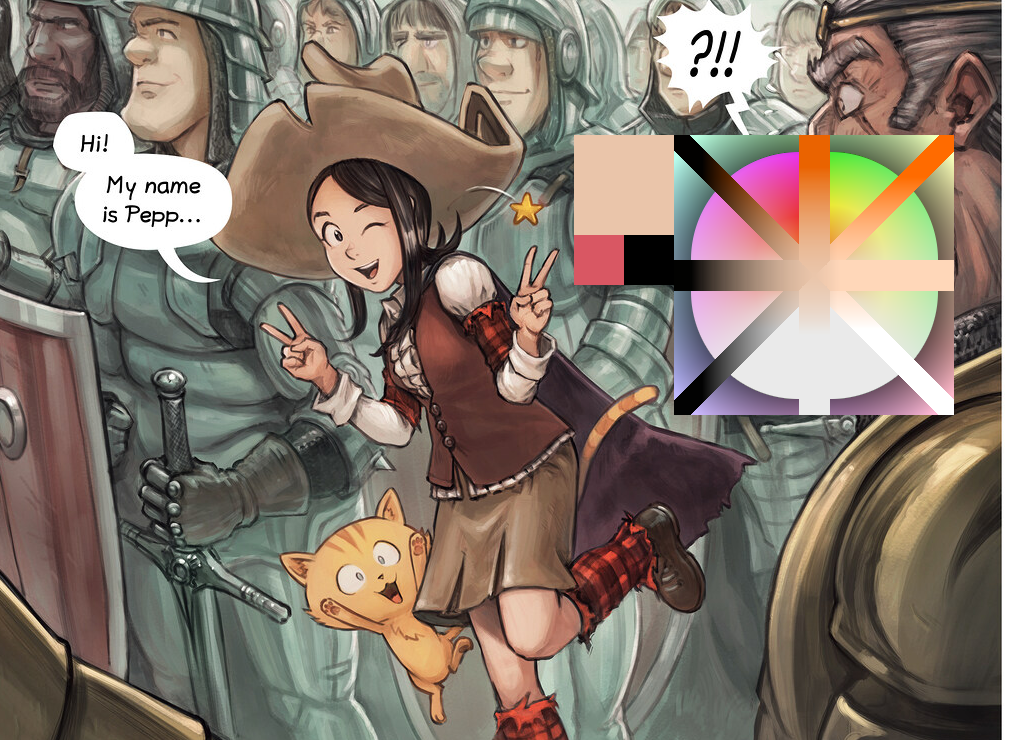 Support for dynamic use of currently selected colors in gradients.

While Krita had support for the GIMP Gradient format, we never supported the dynamic changing of gradients based on the current fore and background colors. Nor did we do so for the layer styles. This has now been added. Several of the bundled presets use the foreground color to easily create sparks, haze and other effects. 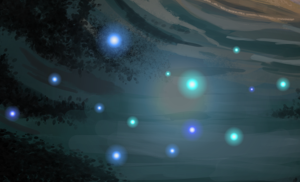 Yay! I’m so excited to try all this new fantastic features. The new brushes and the pattern look awesome.

Thanks a lot Krita Team!

Congrats for the new release! Looking forward to test it. By the way, on the OS X version, it says 4.4.1 alpha (dev build). Is it ok?

Great feature additions in this release!
I’m also happy that subtractive brush masks now work in floating point without artifacts, the watercolor presets use it a lot.

Not sure if you intended to, but you’re matching the KDE Plasma release today as well.

Yeah that was an accident, we wouldn’t do that deliberately because it can be quite confusing for the KDE promo team, but we were a week late with this release.

Just a quick drop by to congratulate and thank the dev team on the new release ! I’ve downloaded it and excited to try it out. Cheers

The stable version for macOS downloads via the following link.
Krita Stable Download
However, the actual installed app is 4.4.1-alpha (git f1e4447) which is a developer build. Can this be fixed? Thanks. 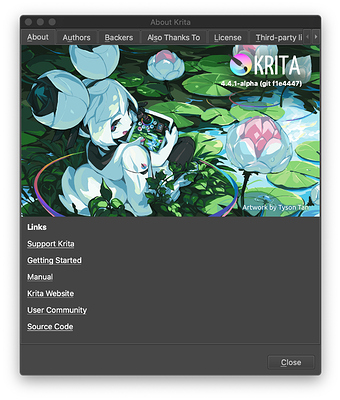 I’m new to Krita and this forum but I just wanted to say thank you to the devs for their hard work on developing Krita, it’s mighty impressive, and not just for a FOS program, a plethora of features. Great work! Congrats on the new release!

@oliver @rlblairjr yeah, we know about the issue now, it looks like the binary factory built from a stable branch instead of the release. It should be quite similar to Krita 4.4.0 but it might contain some new features and probably doesn’t have translations. If you’re fine with English, you should be able to use it for the time being, since it’s a stable build. We will try to fix that asap but of course it will take some time.

I have a problem with the toolbar, it does not fit the size of my screen (which is unfortunately small).

Yeah, there’s only the English translation. I can deal with English easily but of course, prefer my own language

I also was wondering to get an alpha version of krita, but that’s a nice opportunity to check new features.
My preferred version is still version 4.2.9.

Hi sorry to ask this again. I already have 4.3 in the machine. Do I just run the new installer for it to overwrite? There isn’t a check for update option in the previous version.
Also will this reset all my custom interface and favorites?

Well… We’ve been getting a number of reports of regressions in 4.4.0 :-(. I want to make a 4.4.1 this week… For 5.0, I doubt we’re going to make it this year, but at least I’m making good progress with the resource rewrite again!

(I’ve been working on that for a couple of years now, and it’s kind of sucking all the fun out of coding. I want so much to do some fresh stuff!)