In today’s tutorial, I am showing how to use the Vanishing Point and the Perspective Assistant tools.

The video is in two parts.

Part one is a quick review of the different types of linear perspectives for those unfamiliar with the techniques, or for those in need of a refresher course. I also explain what is the best technique to use depending on your project. You can skip this part if you want.

The second part of the tutorial begins at 03:14. This is where you will learn how to use the two assistants.

Hope this will help you. Until next time, have a great week.

00:25 Update from last week’s video. My apologies for missing this. Showing you how to preview and see the assistants.

01:24 A quick review of the different LINEAR PERSPECTIVES and WHEN to use them.

04:43 One more thing about the Vanishing Point! Using the handles.

09:06 Vanishing points don’t have to be on the canvas! 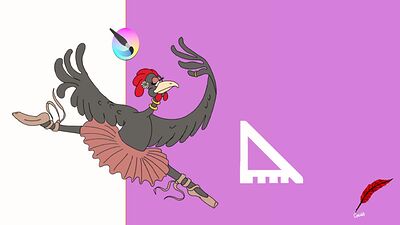 You asked for any corrections to English terminology:

At 5:32 there is the confusion between ‘vertical’ and ‘diagonal’ lines. I think a better word is ‘radial’ lines since they radiate from a point.
(The word ‘vertical’ would be appropriate if the VP was being used to construct the vertical edges of a building, but the lines would still be ‘radial’, coming from the VP.)

Now for the rest of my comments:

At 4:45, you mention that you can ‘modify the assistant with the handles…’.
However, you don’t explain that the VP centre is defined by the intersection of the handle lines.
As such, this is a very useful technique for fitting a VP assistant to an existing image or photograph in order to add or extend the content.
It’s also useful for checking if the VPs in an existing image are consistent and realistic.

Maybe this could be explored and demonstrated in another tutorial some day?

At 5:30, you use the freehand brush snapped to the VP lines to draw the railroad tracks. You start from the VP itself and draw outwards from it. This method makes it difficult to precisely adjust the angle of the assistant preview line. It’s better to start the line away from the VP and draw towards it.

At 6:10. you draw horizontal lines with the line tool. This is easier and quicker if you press and hold the V key to switch from the freehand brush tool to the line tool, click the mouse (or touch with stylus) to start the line and then press and hold the Shift key to force to line to be limited to +/- 15 degree steps.
Maybe that is too much information for a tutorial that is aimed at beginners.

7:00. For two point perspective, a new Assistant tool is being developed to do that:
Call for Testing: 2-Point Perspective Assistant
So an update to the tutorial series will be needed in the future

In the two point perspective section, I was surprised that you didn’t use a parallel ruler assistant to help with the vertical lines but later on you did say that the tutorial was aimed at beginners and that you’d deal with the ruler tools in the next tutorial.

After only a little bit of thought, I realised that planning and making a good video tutorial needs a lot of time and serious work so I decided, a long time ago, to never make one.
You have my respect and thanks for making an excellent tutorial series

Hello. How are you? I just read your comments. I am afraid I did not pronounce your screen name right. however, please believe me when I say that I tried my best. Acknowledging your contributions were overdue… So, you are welcome.

First, thank you for correcting my English!

Second, regarding the handles at minute 4:45.
I didn’t know that you could check the consistency of VPs photographs this way. You are teaching me something new every week.

Regarding what you said here: [At 5:30, you use the freehand brush snapped to the VP lines to draw the railroad tracks. You start from the VP itself and draw outwards from it. This method makes it difficult to precisely adjust the angle of the assistant preview line. It’s better to start the line away from the VP and draw towards it.] Why didn’t I think about it? I am going to try this after I post this reply.

Also, you are right… My videos are for beginners. If I get too technical too fast, I’ll lose my students. I don’t want to betray my beginners. It’s important to me.

I would be arrogant if I said I knew Krita very well. I believe I know enough for creating my cartoons. However, doing these videos, I am starting to discover new tools and new techniques.

I am so excited about the new Krita coming up. I hope they will give us a tour of all the new things they are about to change. It’s coming in August, right?

Regarding the rulers, they are coming up, in the next video with the spline. There are so many things I could show in one video, but I am afraid that if I make my tutorials more than 15 minutes long, people won’t watch them. We are living in times when everyone is in a hurry.

I am a little worried about the spline tutorial coming up, as I never used the tool before for my cartoons. I will have to do some research on how to use it best. That said, I’ll make sure to tell my students in the video that I don’t use the tool and what I am about to show them, I learned it this week. I hope they will forgive me for that…

Have a great day and thank you so much for the corrections. You are the best. You should definitely make tutorials. I’d watch them and subscribe.

Hi @CelticCoco, I’m fine thank you and I hope you’re well. In the past, French people I’ve met have pronounced my real name with an ‘incorrect’ vowel sound and it doesn’t bother me at all. It’s like having a new name but with the familiarity of the old one

All I know about version 5.0.0 is that it will be released when it’s ready and it’s intended that it will be ready this year. Before then, there will be public beta releases of course.
You can try the development pre-alpha now but if you do then you should use the portable .zip package, backup your configuration files and resources folder and then restore them before going back to using the formal release version that you usually use.

You can use the spline assistant to make multi-segment complex curves and snap to them but it’s a lot of work for more than two segments and making a good join isn’t easy even for only two segments.
Here is a very simple illustration:
Vari-line Assistant Tool - #5 by AhabGreybeard

I’ll look forward to your next tutorial video but I doubt if you’ll ever see one made by me.