Krita does not remember my layout properly

I keep saving my layout as a workspace after adding some buttons like reference related stuff in that area outlined in the blue lines. Krita does not remember those next time I open it, I pick my saved workspace to make sure, that does not help either. Is there a trick to make sure those top bar modification is remembered?

The contents of the Toolbar are independent of the workspace so this is a problem with modifying the Toolbar contents.

Which version of krita are you using and which operating system?

Which available actions were you adding to the current actions?

I use 5.1.3 on Windows. I was adding the reference tool and the assistant tool related stuff.

Is it possible to modify the toobar at all?

Is it possible to modify the toobar at all?

Yes, very much possible.
There are two sections to the Toobar with a small marker/handle at their leftmost side.
That can be used to drag the two sections to different parts of the workspace but you should only use locations where they have a horizontal layout because a vertical layout has a weird and useless appearance.

Here, I’ve added two assistant actions and a reference images action to the main toolbar.
Those actions do not have icons, they have text labels so they take up a lot of room.
I’ve dragged the BrushesAndStuff toolbar to be below the main toolbar.
The leftmost handles are outlined in red:

… after adding some buttons like reference related stuff in that area outlined in the blue lines.

If you did that then you modified the toolbar. The puzzle is why that wasn’t remembered.
Was the toolbar back to how it used to be after you Quit and then restarted krita or after you’d made changes to the workspace?
This shouldn’t involve saved workspaces at all.

Can you show a screenshot of the toolbar after you’ve added those actions?
Note: for detailed content, you should use a .png screenshot image. Also, please show the entire width of the window and some distance above and below in case there is something unusual to be seen there.

I won’t be here for much longer today but further information will be useful to anyone else who tries to help with this.

This is what I have when I add those tools to toolbar. 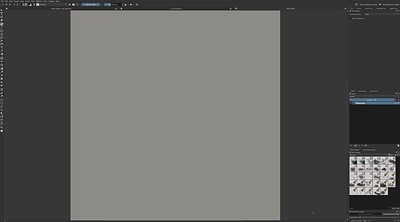 Then that should be the same after a Quit and restart.
I’ll have to leave it at that and think about it tomorrow.