Hey, I’ve been using Krita for pixel art since 2018 and after the latest update it’s borderline unusable for pixel art in general. I’ll be updating the list over time as I come up on bugs or features that hinders the process more than it helps. As for now, these are some of the more annoying bugs/features I’ve come upon. Do understand this is all from a pixel artist’s perspective.

This is very annoying as no stroke can now be smooth or done in a single movement. I’m sure some people may prefer this but from the pixel artists I’ve talked to, they’ve all said it’s annoying.

Now I have found 2 different ways to get by this, but they all create other problem.
we could either -

This method stops the cursor from snapping to the grid, and keeps the flow smooth. BUT, when we try to use any other tool apart from the brush tool, (eg. Line tool, Polygon tool, Rectangle tool etc) the width of the brush starts acting up. For example if I have the brush size at 1,3,5 or any odd number the dedicated size of the line or whatever is drawn becomes a single pixel more. As seen below

This isn’t even the only problem. All the tools start putting random orphan pixels on the end of the lines.

In this method, once again if we change the outline shape to no preview, sure enough there is no snapping to grid because well, there is nothing to snap to grid. But this creates another problem where as if we have any of the cursor shape, then the cursor itself becomes so incredibly small you cant even notice it at times. Plus if the background color in question is the same then it’s near invisible. None of the cursor shape is usable for pixel perfect precision, which you know, we need here. This method would have worked if there was a square outlined shape to work with.

If there was a simple toggle option for snapping to grid to turn on and off, this would be solved.

This is so extremely annoying, I’ve had to make a different project file with hand drawn circles so i can drag and drop them. I really don’t know what to say apart from pixel artists deserve a better ellipse tool.

This isn’t a new problem or bug, just a feature I personally have been looking forward from the very beginning. Pixel art is usually drawn in relatively smaller canvas sizes, to present it to people we upscale it x% in nearest neighbor upscale algorithm. All the other ones add anti-alias to the picture making it a blurry mess. 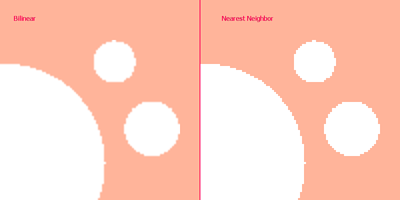 But choosing the upscale method every single time is a hassle. If there was a method to set a default algorithm for upscale it would really help.

Critique and advice are the most important aspects of learning anything. Now with the previous changing of size and algorithm type every single time someone wants to ask for advice or just wants to show a progress. This is really annoying as you first have to upscale it with a bunch of options, and then export it choosing your file extension. If there was a quick upscale and export, it would be very helpful in many occasions. Even when I was making assets for game I felt like a quick export would make it infinitely easier.

Now with that said, I know theres a GDQuest script that does this 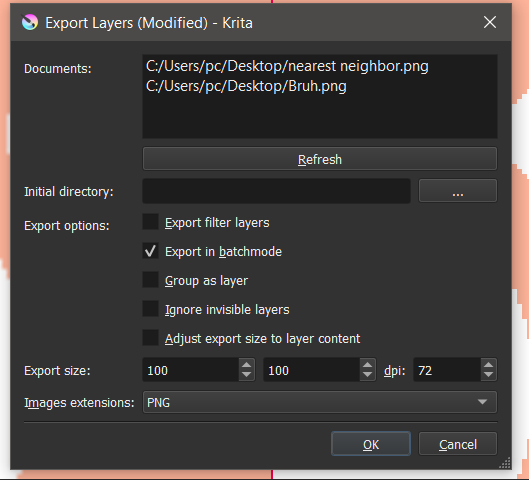 But that plugin only up scales in Bicubic algorithm, which once again blurs the image. I know this could be solved easily. But having a genuine options would make it much easier without all the hassle for installing python scripts.

This isn’t just for pixel artists, but all animators in general. Although I’m including this here because the movements in pixel art animations literally have to be pixel perfect. As you see, the arrow keys move between frames and theres no shortcut to remove it. At least I haven’t found any yet. 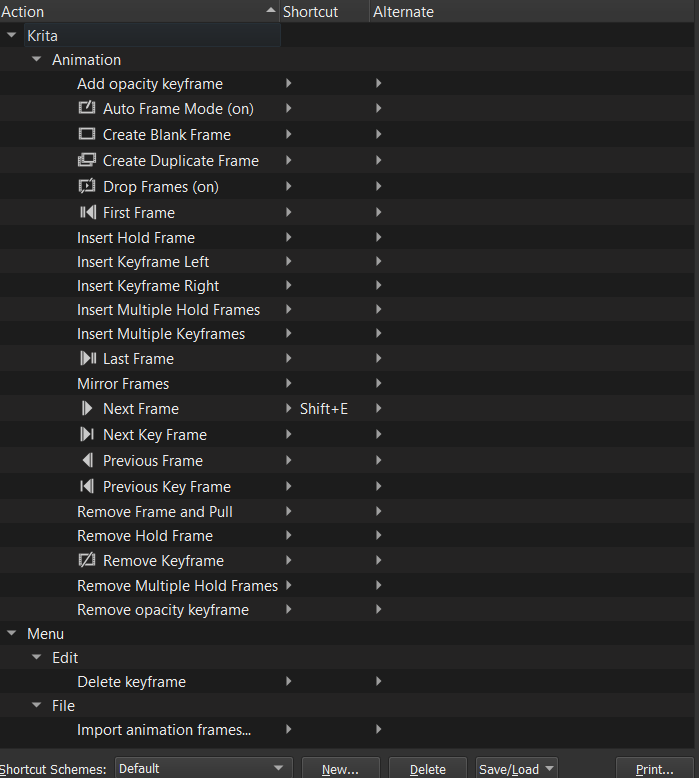 now any time I have to move something while animating, I have to use the mouse which is a major buzzkill since I have to hover the mouse for 30 seconds before finding the 1 single pixel movement. I could have done it in 1 second with the arrow key but tapping arrow key just moves over to the next frame.

Cant seem to be doing that anymore. And I haven’t found any toggle or option that might have changed this. Do tell me if it’s just me being a dumbass.

I know i can still copy a layer, then go over to another project and paste layer, but really?

Thats all the ones that come to mind for the time being. I’ll update with more if I come across them.
You can find my pixel art here if you have any reason to doubt authenticity.

I think that Krita has incredible potential in the pixel art space. I love that you can for instance make pixel brushes like those I made in this video https://youtu.be/89qJ-1cTW7g?t=41 (0:41) and this video https://youtu.be/LjvIcK6fr0I?t=25 (0:25) as I have not seen other programs being as customizable with their brush engines for pixel art.
Sadly Krita has small problems with pixel art like the ones on your list, and I would looove to see these problems get fixed, and that Krita in the future can shine as a pixel art tool!
This is a great list with good explanations!

Note that pixel art definitely is not in our vision statement. Krita is not being developed for making pixel art. If it works, fine. If an improvement for the things we do focus on breaks something for people making pixel art, that’s fine, too.

As for the drag & drop thing, Qt broke that, and we couldn’t work around it.

Understandable! Even though it is something that I would have liked to see in the future, I agree that it is more important to achieve the vision, and improve on what Krita does best!
Thank you for the great work you are doing, Boudewijn!

The ellipse and line tools missing pixels strikes me as incorrect rasterization, which is quite possibly occurring in all scenarios, not just for usecases like pixel art where the smoothness is off and the issue is easier to see. I think that should be tested. (In any case, all bugs in the existing interface and tools are bugs affecting usability and therefore should be fixed, if the feature is worth having, logically speaking.)

If in case there will be more demand for pixel art features and some volunteer would want to implement them. I would like to link LibreSprite here for reference purpose.

LibreSprite originated as a fork of Aseprite, developed by David Capello. Aseprite used to be distributed under the GNU General Public License version 2, but was moved to a proprietary license on August 26th, 2016.

This fork was made on the last commit covered by the GPL version 2 license, and is now developed independently of Aseprite.

There’s also Grafx2. That program is literally designed to work with up to 256 colors, and you can actually do blur operation and other operations. If I was into pixel art, that’s what I’d be using. GNU, and heavily taken aspiration from earlier amiga softwares, and ultimately focused in pixel art creation.

A tiled painting option would be very useful.

Try this:
View -> Wrap Around Mode!

Yes, I know that.
That’s not tiled painting.

Can you explain what it is? A google search for the term only shows me bathroom tiles and home renovation

I was wondering what vespertine meant by “tiled painting”, when he said it was not like Wrap Around Mode.

Oops, I’m sorry, Rakurri. I was intruding and saying the obvious

Well, I think - Verspertino - would have a good result using: mirror tools + multibrush tool + wrap around.
with that I can imagine mosaics, or maybe I’m just intruding again

What I understand about tiled painting is using a tileset to paint an image think of tiled or even pyxel edit. However I don’t know if that’s what @vespertine is referring to, but if it is the suggestions of using wrap around mode are completely useless.

However I don’t think this feature would be useful in krita. I don’t recommend krita at all for pixel art because of all problems already listed here and the fact that it’s not the focus of the program. Aseprite + pyxel edit is a good combo imo.

Seems a bit harsh to not recommend it at all. I get that it might not be the best for game sprites and tiles, but I think you could make amazing start/end screens with Rakurri’s brushes faster and easier than placing each pixel manually.

but I think you could make amazing start/end screens with Rakurri’s brushes faster and easier than placing each pixel manually.

That’s a misconception of pixelart people have. In aseprite you can even create brushes to speed up your process. In the end, the process for pixel art in a program like aseprite would be very similar to krita just less frustrating. I haven’t seen anyone doing pixel art by placing each individual pixel. The process is actually very similar to normal drawing. Where you block out your shapes and then refine it. Usually people use “big” brushes like 3 to 6 pixels wide to block things and then go back erasing to block shapes.

Seems a bit harsh to not recommend it at all.

I don’t think it’s harsh at all, as far as I understand a recommendation is based on a personal view of a product focusing on your experience with it. And to me krita workflow for pixel art is not good. Since I don’t like using krita for pixel art I think it would be a lie and hypocritical for me to recommend it to other people.

While it is possible to use for pixel art I think there are much better alternatives, pixel art was never the focus for krita so it makes sense it has problems with it, don’t think that’s a downside of the program it was just never made for it.

I just meant painting using tiles. So that they would simply repeat in a grid pattern.
It’s just that it would not even be that hard to implement, this isn’t about it being the “focus” of Krita. If how Spacing works was explained even in the slightest it would even be very easy to set up using it, but alas it doesn’t seem to make any sense in my experience.
Honestly all this dismissal based on the “focus” of Krita is kind of ridiculous. Why do you not want your product to be better?
And if Krita was NEVER EVER made for pixel art, why are half of the patterns pixel art?

You should take a look at Tiled It is Free and open source too.

There’s G’MIC interactive tiler tool made by me as well. That allows you to paint using tiles and this isn’t just in Krita. You can see the code in gmic-community@github and improve upon it even though it works for pixel art tiling really well.

Also, to answer your question, Krita internally has a engine that is meant for generic painting. It would be easier to work on non-pixel art related things. I’d argue even photo-matting focus is easier to achieve than to rewrite the whole thing just to support pixel art as a whole.