Type of device* :
Brand and version of the device:
System** : 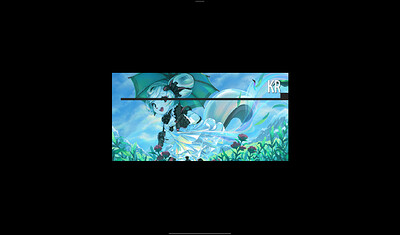 A galaxy tab s6 lite
Android krita 5.0.6
I cannot open and stay freezed i uninstalled and reinstalled the app and nothing works

Description of the issue (you can include screenshots):

Well, the title may need some change to let people know more on android tablet can identify and help.
I change it for you

Edit:
Also need more information, such as “Android version” and “Krita version”.
If you use google play version and get auto update recently, Krita should be 5.0.6

I just recently discovered Krita, I already love it on my pc, and I was amazed to know that it “should work” als on tablets, in its own port.
So I installed too on my own Samsung Galaxy Tab S6 lite.
I started to practice to it too, but since yesterday (11 may 2022), after i tried to save a new file, Krita crashed, and keep freezing, once opened again, on a black screen. (I guess very like the OP here)

I ping @sh-zam to let him know the issue.

Thank you so much

I’d suggest you to backup configs and presets in Android/data/org.krita/files and then Clear App data in App info and try again. If see tried uninstalling, did you check the “Keep MB of app data.”?

I started to practice to it too, but since yesterday (11 may 2022), after i tried to save a new file, Krita crashed, and keep freezing, once opened again, on a black screen. (I guess very like the OP here)

Can you share the image statistics, they’re in the Status bar at the bottom of the screen?

For me, it was just the second day trying to use Krita on my Tab, so I was just messing around a couple of options to see how it could have handled it: it was a simple A4 format, 300dpi, 2 layers (background + 1 layers with a couple of doodles on it, just to try the pen). when I tried to save it, the only “weird” thing I did was selecting the Photoshop .psd format (I also have it on my pc, so I was curious about Krita on mobile could handle it) and, once I named it and tried to save, Krita experienced the first crash…
… from that point onward (as described) when trying to launch the app, it just stay on a “black screen” for a few second, then the Tab goes back on the “desktop” by itself, but with Krita still placed as in “background”. If I try to bring it back as active, the app goes by itself in background again… after a few cicle of this loop, sometime (not always) it actually crashes, with the Tab giving a message (roughly translated by my native italian settings) as “The app crash is caused by a bug. Wait for it to be fixed and download it again” (or something alike… it does not happen always… sometime is just stuck in the black screen).

Disinstalling/reinstalling does not change the “stuck” behaviour.

I’d suggest you to backup configs and presets in Android/data/org.krita/files and then Clear App data in App info and try again.

… weird thing is: on my Tab, the “org.krita” folder does not exist at all …
(could it be this the issue, as maybe a bug not creating the storage of Krita settings, so not allowing it to launch properly???)

The org.krita folder is hidden from most file managers. You’ll have to use one either from Google or, I think the name of the other one is Total Commander.

Personally, I use the shortcut for Google’s file manager and get at it that way.

Dunno if it could be different, but I searched the org.krita folder with my Tab connected by USB to my desktop PC, and using it to navigate the Tab memory as alike an external drive (just to “backup” eventually any setting needed on my pc, to put them back later) and it is not there at all: I can see dozens of other folders, in Android/data, but not Krita’s one.

For comparison, as my Tab was basically never used, when using the Google File Manager (as adviced), the same Android/data folder directly on the Tab itself shown as “empty” 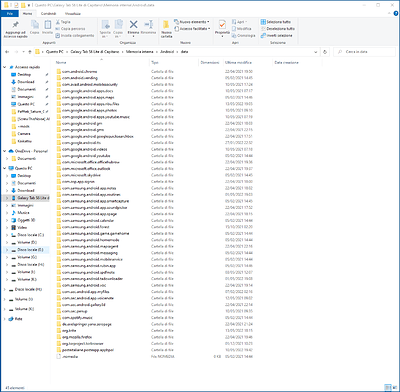 As I see it from my Tab, with Google File manager: 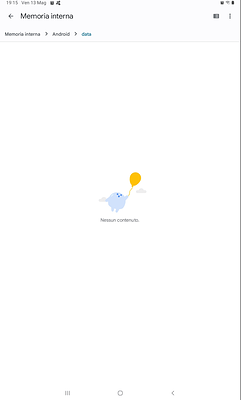 I’m not sure if I’ve understood you correctly.

and it is not there at all: I can see dozens of other folders, in Android/data, but not Krita’s one.

But the folder is there.
Please look at the fifth entry from the bottom, you have overseen it in your big screenshot.

For your tablet, go to https://play.google.com/store/apps/details?id=com.marc.files in the Google app store and get this app shortcut. This is the one that I use to get at the hidden Android/data folder.

As Michelist pointed out, it’s the 5th entry from the bottom. 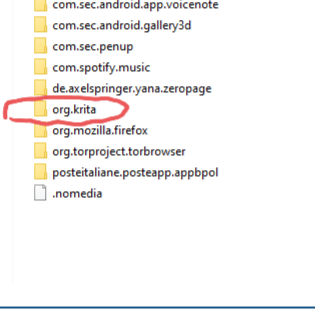 This is it as seen from the file manager I told you about: 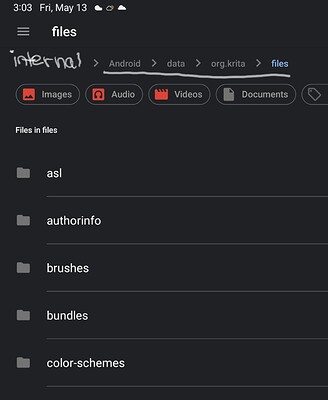 @CapitanoAraym & everyone interested in a versatile file-manager for Android, I don’t know the capabilities of this file-manager >>

For your tablet, go to Files in the Google app store and get this app

but if you should prefer an orthodox-file-manager with two panes side by side, I suggest you to try “Total Commander”, also mentioned by @CrazyCatBird in one of the postings above.
Total Commander was able to view and access the files under “data” in earlier versions of Android, if this is even today the case, I don’t know, because for three years now I’ve been using an Apple phone and I can’t say if Google has changed Android to the point where Total Commander still has access to all folders, I only know that the Krita developers are “unhappy” about the constant changes to the Android file system.
In any case, I was always very satisfied with it.

I learned about the shortcut app from others for another art app forum. There was much trouble with trying to get at the user created work files when Google changed things😡 and this was one of the solutions to get at them for backing up.

With the shortcut app, it’s just that, a shortcut to what already comes on your Android tablet (that file browser made by Google).

Total Commander was another suggested solution I read about on that forum.

Anything that helps people maintain access to their property, tangible or intangible, is considered good! At least in my eyes.