I’m not sure what’s going on but I have an Image Sequence with about 23 frames as .PNG files at 1MB each @ 512x512 px. Importing everything is fine & preview playback is good but when I hit Render Animation for some reason Krita is not keeping the original 512x512 resolution & does a much smaller weirder resolution.

I’ve tried many things. I’ve quadriple checked my .PNG files & they are 512x512 according to everything I import them into. They were rendered as an image sequence using Blender which I’m very famliar with using & was even originally output from Blender as 512x512.

Just not sure what’s going on. I’ve exported this same way before numerous times using Blender & Krita, even with the same resolution & 1MB .PNG files so I’m really stumped, maybe I changed something by accident in Krita??

I’d really appreciate if yous can throw some suggestions at me as to what could be causing this. When I 1st open Krita, I click on NEW, make the dimensions 512x512, hit Input Animation Frames & import my image sequence & reads the images fine in Krita image properties showing the correct 512x512.

Thanks for your time.

What resolution are you outputting? When you render, what is your scaling setting?

Hi KnowZero thanks for your reply.

I’m outputting 512x512, same as the original .PNGs. It’s definitely something silly, I just realized it’s only outputting wrong resolution GIFs when the PNG files have transparency. If the PNG frame files have filled backgrounds then the correct 512x512 GIF is rendered.

So I guess my question is how do I keep the full original 512x512 image dimensions of these PNG files which have transparent backgrounds when rendering GIFs??

Also just to test, with those same PNG files I’m able to make an animated GIF fine in GIMP, resolution stays as original transparent backgrounds, so not sure what Krita setting I changed or what.

If the PNG frame files have filled backgrounds then the correct 512x512 GIF is rendered.

What happens if you have a filled background layer and have the .png sequence with transparency over that?

Would you be able to make the sequence available via a file sharing service or website?

Can you export “Both” video and image sequence? Then see what the image sequence sizes come out as? To see if the issue is on Krita’s png exporting or ffmpeg parameters

Yea ofcourse, so I already tried this previously as I was curious but just reconfirmed. So the exported PNG sequence is awesome & is the same result as when exporting just 1 PNG image, 512x512, all good. The GIF however same problem as I’ve mentioned.

The big clue I guess is that the GIF’s “wrong exported resolution” is equal to the dimensions of the biggest object in the canvas if that makes sense. I just want the same resuts in the GIF as my single PNG exports.

I’ll try to upload a few of the image sequence files & I think yous would know straight away what I’m doing wrong.

Thanks for your help!

Yea after importing the image sequence, I tried making another File Layer which was a 512x512 transparent image & used that as the background, but still same result. Please keep in mind that when I just choose any frame & do a single PNG export, with no extra “background” layer etc it exports it nicely with correct resolution & transparency, just the GIF export is doin this.

I zipped the image sequence & also included the “wrong resolution” GIF export from that sequence. Just click on the download icon in the top-right to download the ZIP.

Which version of krita and which operating system are you using?

I opened your Wrong Resolution GIF.gif file in GIMP and it said it was 512 x 512 so what’s happening there?

Are you using a recent version of ffmpeg? That is important if you want to render an animated .gif with transparency. I’m using ffmpeg version 4.4.1 which is a bit old but seems to be working well for this.

Hi, thanks heaps for checking out my files & trying them.

I’m on Windows 10 Pro 64, not sure which version ffmpeg I was using but when this problem started happening, I have directed Krita to the 5.1 ffmpeg I just downloaded today but still have the same result. Krita is version 5.0.6.

Yea it’s weird, when I check out the properties of the Wrong Resolution GIF file just using Windows itself, it says Dimensions 145x84 which is close to the dimensions of lets call them the eyelids themselves, & I can tell by the GIF thumbnail the eyelids aren’t displayed in the right size. Windows Photos app plays all my GIFs normally & the very same image sequence exports fine in GIMP but I really don’t like using GIMP & it has less GIF options & control to play with & the process is much slower.

I’ve uploaded to Google Drive a working Krita GIF export of that very same image sequence, to show what it’s supposed to look like & the size of the eyelids. As I mentioned before the only way it works nicely like this Working GIF is when I have a fully-filled 512x512 image as a File Layer/Paint Layer background, which is what I done in this Krita Export I uploaded.

Another clue, if I use a fully transparent image as a File Layer background, then go to the “Image” tab & to Properties, & change the “Background Opacity” to 0.50 or higher, then it renders the GIF nicely.

It’s got to be something silly I’ve done/changed with some Krita transparency setting.

When you rendered those similar image sequences using krita, how did you know that they were rendered out properly at 512 x 512 with transparent background?

As I mentioned before, your Wrong Resolution GIF.gif file is opened by GIMP and presented as a 512 x 512 animated image with a transparent background.
Also, the ‘eyelids’ appear in the correct position corresponding to their position in the original .png sequence image files.

So where is the difference between Wrong Resolution GIF.gif as produced recently, which you think has a problem, and the previous work at 512 x 512 with transparent background that you say was rendered out correctly. By what method do you detect the difference?

Is it what Windows itself tells you or do you have other ways of checking?
Have you tried opening Wrong Resolution GIF.gif using GIMP and checked the image information?

For ffmpeg, did you get the gyan release essentials build from here?:
https://www.gyan.dev/ffmpeg/builds/ffmpeg-release-essentials.zip
If not, I’d suggest that you do.

It’s got to be something silly I’ve done/changed with some Krita transparency setting.

For rendering as animated .gif, here are the options I use and I think these are the default options: 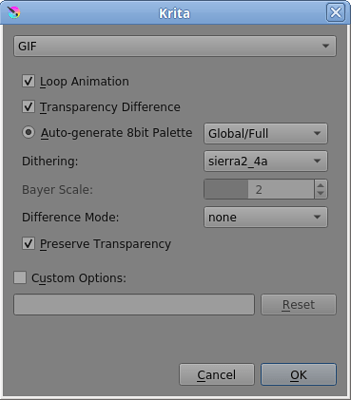 See here I have restored your post which was flagged by system by mistake. Hope you calm down and continue using the forum.