With everyone getting back into work, we have managed to control the number of bugs. There are 2 fewer bugs than what I reported last time. I know it is still not a lot, but with @dkazakov not available for most of the time and team having to divide its time between the resource rewrite & bug fixing, it is pretty good that the number is decreasing. 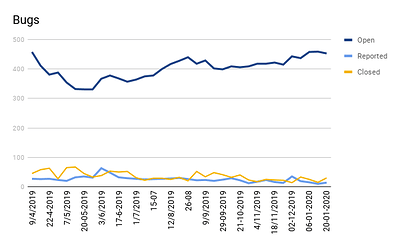 The commit history surely tells that @boud did a Coverity scan and fixed a lot of issues identified by it. @tiar is busy fixing OpenEXR. She also amended the manual a bit regarding all different logs and back-traces that one can get out of Krita. Other than she has also made herself available for documenting some of the code related to resource rewrite. As I said earlier @dkazakov is on parental leave, but he still managed to pull off a couple of patches in the last two weeks while trying to fix the transform tool bugs.

@RamonM is gearing up for a new video about the brush engine for our YouTube channel, don’t forget to subscribe so you won’t miss. @IvanYossi is deep into bug fixing and apart from that, he is also trying to get a multiple tip brush into play.

Apart from those, as a part of Season of KDE, Amyspark would be working on fixing the floating-point operations on CMYK and Lab color-spaces. Also, there is a mixer slider docker in Krita now thanks to @tusooa which allows you to choose from the gradient between two colors.

This was originally posted at https://www.hellozee.dev/kw9/

Can you explain what exactly that mean ? He work on some new type of brush or on currently “animated brush” settings ?

I’ve seen mention of the ‘mixer slider’ docker in other places but I can’t find it in the latest Nightly 4.3.0 prealpha. Is it only a master build thing for now?

It’s a Python Plugin, so you have to enable it first.

Thank you for that information - it’s there and working now

After I enabled the plugin, the Mixer Slider Docker still wasn’t in the list of dockers until I restarted krita . If that is to be expected then it would be a good idea to have that noted in the description/instructions in the Python Plugin Manager.

I have built from git, but strangely I don’t see this in the list of python plugins in the configure Krita dialogue. Am I missing something?

Then Boud fixed it within minutes - krita is great

An animated tip is loaded only from premade gih files, but aside from that there is no way to combine, select different shapes , change animation optinos, etc; for your tips inside krita. In sort the idea is to have all the tips as a library and create new tips collections for better artistic control.