Maybe this is a bit harsh but would it be a good idea to lock #develop:feature-requests so that new accounts without any reputation can’t post there?

And it’s usually by users who are new to the forum, haven’t done any other topic but the request and are typically sparse with replies when asked for more details, if they ever log back in at all.

So my idea would be to tie it to the Discourse Trust Level, so you need at least level 1 Basic (or even 2 Member), or something like that.

It would make sense to me…

This isn’t a bad thing, I say. Some of the best feature requests already started as a general question on how to do things and after discussing the whole thing with the community, the user probably has the propper trust level and enough material to compile a proper feature request from this.

Another thing I’ve seen once is that feature requests can only be created from a discussion, kinda RFC like, but that would probably require too much moderation.

There will be a pop-up message no one’s going to read x3.

There will be a pop-up message no one’s going to read x3.

While this makes sense, I am afraid this is going to add in to the myth that devs or the community doesn’t listen or is contrarian and what not. People assume too much without trying to find any reason as to why something is done like that.

Both of these can also be interpreted as “devs don’t care” there’s pretty much no way to prevent this. There even are people who complain even after they got their request implemented.

Limiting the request category to level one or greater + moving low effort requests is probably the best for the start.

OKay that too makes sense. I edited the category to lock out trust level 0 users, these are users who have just joined the site. If needed we can later lock out trust level1 too. While the users are locked out to start a topic they can however reply on the existing topic or topic created by others who are allowed.

Sounds good to me.

Uhmm I mean considering the amount of people running in just to feature request I would say it is worth a try for sure.

There even are people who complain even after they got their request implemented.

Every time I help that is usually what I get. People are difficult for the sake of being difficult.

unfortunately no matter what you do, there is still gonna be people who no matter what you do, say or give them, they’ll never be satisfied or happy with what the end result or answer is to their quesiton. The amount of post I see in the #develop:feature-requests that consist of features that already exist (renamed or not). something similar or not the highest priority is pretty bad. I do think having a guideline in place that would have people either search if the feature request has already been suggested, implemented or just not the highest priority before actually making a feature request post would help cut down on the amount of duplicate post.

Some of the posts in the feature request category were before the voting system. So if anyone finds some duplicate just ping me I’ll merge them.

For now the limit is imposed so lets see how it works out.

According to this feature request

As an amateur image/photo editor I would like to see what’s going on outside of the allocated area for my canvas. I have the following use cases in my mind: I can insert a new image whose size is a way greater than my canvas. Of course, I am going to shrink it. But if I don’t see the inserted image, it’s hard to me to find its edges. If I have the canvas semi-transparent, I can find them with ease. Well… at first it took some time for me to figure out that I should not select anything on the …

User got basic level in less than 1hour…

I thought about it too. As I understand they must enter atleast 5 topic, but I don’t see anything other than the feature request post. May be increasing the level to trust level 2 is good?

In any case I feel that if we restrict people it will be negative impact. Still lets try setting the bar high a bit.

As I understand they must enter atleast 5 topic, but I don’t see anything other than the feature request post.

Level 1 triggers are 5 topics viewed, 30 posts read, 10min read time
May be triggers to get level 1 are to low?

In any case I feel that if we restrict people it will be negative impact.

It will depend how communication is made I think

I don’t know if it’s possible, but in categories it could be useful to get a more visible description.

Maybe if it’s possible to have a description of category always visible on top, it would help…
Example for #develop:feature-requests: 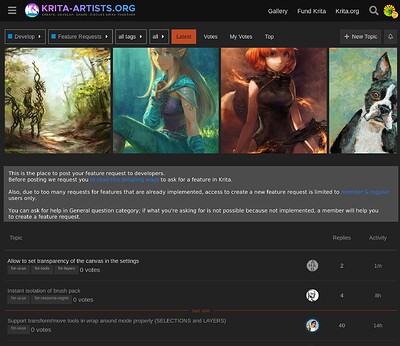 Looks like an autocracy for me. At this point I’d rather quit using Krita. If you really care about it, you should moderate posts, introduce rules or just let the community balance itself. Otherwise, it looks like you are trying to limit what people are allowed to say.

The thing is we get more and more features request for things that are already implemented; people don’t take time to read doc, to search on forum or to ask for help: they just ask to implement things.

The goal is not to stop people to ask for features, but to incite them to ask for help before to reduce the number of features request that are created.
And as I said, if something is really a feature request, it could always be created by another user.

Also, to get the member level 2, it’s not really difficult:

That’s what is being done.

Otherwise, it looks like you are trying to limit what people are allowed to say.

You can say anything you like (subject to ToS and CoC) but Feature Requests are becoming a problem.

subject to ToS and CoC

Unfortunately, number of users reading it might near from one…

That’s what is being done.

Understandable and clear rules which users have to agree with when they post anything or enter the forum. Not some greyed out button which doesn’t make any sense.
If you are so cool, please point out where it is written that only approved people can request new features? It is not written in your guide which you reference in the forum Developing Features — Krita Manual 5.0.0 documentation

You can say anything you like (subject to ToS and CoC) but Feature Requests are becoming a problem.

You can say anything you like too but this is not how problems should be resolved. It’s going to always end up in a bigger problem. Besides, what problem is it? To move a feature request into some general help forum? Wow, that’s really a huge problem.

I’ll tell you what. I will post a screen recording in my feature request and you tell me if that is how your beloved creation should behave. At least, there’s one bug.