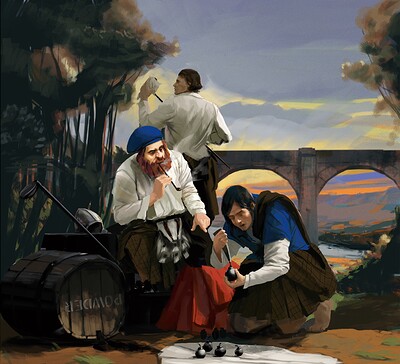 More from my historical military golf series. I plan to do at least one more, so I guess 3 is a series, right?
Here’s #1 for reference:

[battlegolf_01] Bonus sketch from the exploration phase: [wip_battlegolf_02] I think I’ll be doing more on this theme. So much stupidity to explore. I’m imagining this is a lost Scottish clan whose martial art centered around the use of clubs as artillery. Their line did not survive…

This was way harder than the first picture I did. I spent so much time futzing about with the values. The light is pretty different from the admittedly vague idea I had at first, so I ended up “doing it live” and repainting things over and over until I got to some kind of solution.

I’m pretty happy with the mood, though, and also that I actually for once got a pretty decent contrast going!