Tested on Samsung galaxy Tab A 2019.
i had to change the my tablet phone Dpi on developer option to get the Krita GUI scale right.
but it Runs pretty well and stable.

Huawei MediaPad M5 Lite. It works, though with major slowdowns, and sometimes it freezes. But for pixel art it’s better than even more glitchy Pixly.

If G’MIC-QT was supported on Android version of Krita, actually, I may be able to have fun filtering images from using Krita in a phone. Still wouldn’t be convenient, but still way more fun than what’s possible in Krita in a such a small screen.

Hello Everyone! Does Python scripting or Python plugins work on the Android build? If not, is it planned? I tried sh-zam’s arm-32 apk on my Android phone (Nokia 1). It works, but due to the issue with the dialogue windows that are to big for a smartphone screen it’s impossible to acess half of the settings, including the area where the Python plugin manager would be. Menu→Tools→Scripts is empty.
I think Python plugins could be really handy for prototyping more touch-friendly UIs. 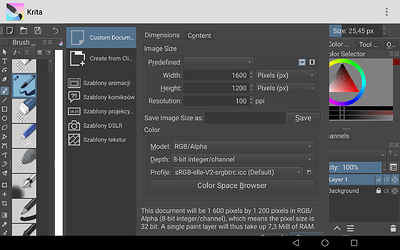 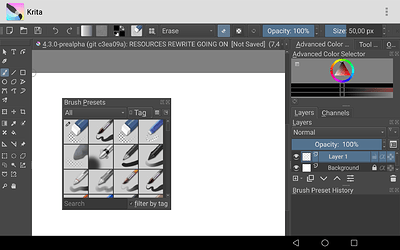 Painting is pretty fast, but there is no pressure effect (painting is “flat”). Perhaps it is due to possible hardware limitations (?), looks like it hasn’t got any sensitive screen as iPad has, I guess.
As for Krita for Android itself, it lacks (of course) some options like fast color picking when pressing cursor at one place for a long time. There are no upper menu as in Windows version, etc.
But in general is looks quite promising.

On the Samsung Galaxy Tab S3 9.7" tablet, the top bar with the three dots does not show; the top of the screen shows the toolbars, starting with the new/open/save icons on the left. If I use an external keyboard, then ‘Alt-F’ brings up the “File” menu (but not the top menu).

I use the same tablet, a Galaxy Tab S3. I have the same issue, thank you for confirming it’s not just me!

@aaribaud @Minstrel May I please know the Android version running on your tablets?

Excuse me but, I downloaded android build 64 bit and it seems cool and the layout is perfect however I can barely seem to even create a file and draw. It’s mostly because I can’t edit the canvas settings, like my keyboard doesn’t show up. And some of the tools are out of sight. 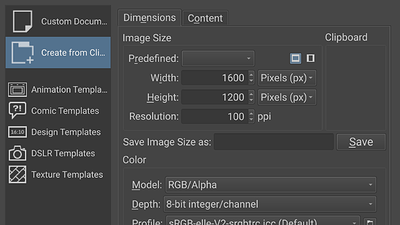 Edit: also I think there should be a back button to return where I last was. And I heard that you guys were aware of the ratio problem, So is there gonna be another built soon?

Yes, we are aware of this problem. Unfortunately the solution to this would be a full UI rework, at least for tablet/mobile devices. This is something on our minds, but isn’t something that which is going to be fixed immediately.

And increase the number under minimum width and then go to Krita and then turn off highDPI scaling. Then you can revert back the minimum width.

(but bear in mind that changing phone’s DPI settings can change your Homescreen Layout.)

Hopefully this should work better than the previous ones.

[if there is a better place for test feedbacks, let me know]

The good thing: the load error dialogs I had with the previous APK are now gone.

The less good thing: trying to open any file (.kra, .png, .jpg), no error message, but no loading either.
Any log / additional test I can run?

Thank you for reporting, it was a missing function which must have fallen through the seams while back porting.

I might have the same problem as you. I open a file and it seems like it doesn’t load anything, but then I rotate the device or select a brush on the toolbar, and the screen refreshes, and the file is suddenly there, open and ready for work.

Can you please test this? https://drive.google.com/open?id=1K6ZnZqtWcBEfYX0HtW31TtD_D8kd0wAr Unfortunately, I don’t have the required dongle, to test it myself

-Toolbox docker: Cannot select a tool with finger-click. But it does respond to finger scrolling if you thin the docker into a column thats 1 icon wide.

-Layer docker: You cannot toggle the visibility of a layer on or off when trying to finger-click the eye icon. Behavior is normal with a mouse or S-Pen.

Keyboard Shortcuts: 1) This menu does not respond to finger-clicks. 2) Attempting to create a shortcut involving modifier keys is glitchy. Apparently the same shortcut is entered multiple times. For example, inputting “Ctrl+H” inputs this shortcut twice. To enter a modifer shortcut “correctly just once,” input your modifer shortcut that enters itself multiple times. Then add a shortcut that already exists on another action. When the window prompts you to replace, cancel. Your original shortcut now appears to be entered “once” in the correct fasion. 3) Even after doing issue 2, attempting to save a shortcut involving modifer keys does not save.

This problem (file loading but needing a pinch/zoom/rotate or other refrsh to show up) I knew from the previous APK (sorry, I should have mentioned it) so I initially though that was it.