I’m still in the process of recreating my favorite brushes from Photoshop. It’s not easy and I wish the ABR import function was more sophisticated like in Procreate or Artstudio Pro. There the brushes are pretty much the same as the original - especially Artstudio Pro does a great job. Anyway.

However, the results looks very different. As you can see in the example below (the top two strokes are from Photoshop - the lower two from Krita … once with Masked Brush enabled and once without), the opacity of the masked brush in Photoshop always seems to be 100% but the overall opacity of the brush is dictated by the main brush. In Krita, the opacity of the Masked Brush fluctuates and is less consistent. Especially at very low pressure, the brush in Krita is almost invisible. At full pressure the main brush takes over at some point in Photoshop. In Krita however, this never happens - no matter how hard I press.

I hope the developers can share some insight on that and maybe something can be done to equalize the both versions. 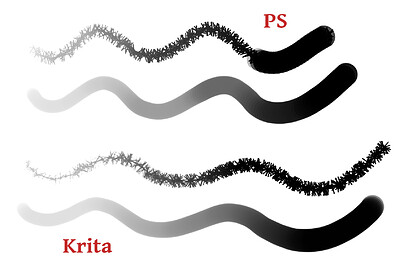 I did a follow-up test, this time using the “Linear Burn” blending mode. Here there are similar differences. As you can see, when I press the pen fully down in Photoshop, the Masked Brush goes fully black. In Krita however, there are still transparency changes going on - even with the pen at full pressure. I also used to brush with the mouse to double check (which is 100% pressure of course) and it looks the same.

To wrap this up, I created a comparison between Krita and Photoshop showing the different blending modes of the Masked Brush. The initial problems seemed to be linked to the bug, that Krita doesn’t use transparent PNG brushes properly (hopefully fixed soon). But once the PNG files are converted to opaque PNG files, the comparison looks much better.

So for those who are interested … here is the chart … left (brownish) is Krita - right (blue) is Photoshop. 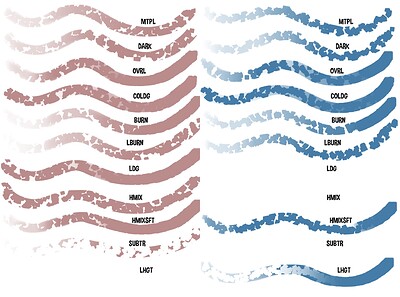 I don’t know but I can imagine that changing your main production program must be hard. I hope the transition isn’t being too difficult for you. I can only say: remember that Krita isn’t trying to be any other program, and some things being different doesn’t mean they are wrong.
I said this because of your closing post:

The initial problems seemed to be linked to the bug, that Krita doesn’t use transparent PNG brushes properly (hopefully fixed soon).

Now about your fidings. They are related to the math the program uses to blend the Mask and the Brushtip, and it is fair to say 99% of users will never know this as is a kind of technical knowledge. It is also fair to assume the ‘right’ way is the one you were exposed first. A Krita only user could think Photoshop, CSP, Artstudio or Procreate were wrong in their masked brushes.

While discussing the new texture blending for brushes, @Deif_Lou explained that Krita and Photoshop uses a sightly different math. You can see how their differ here, where the new modes are proposed. When introducing the modes (per example, 3.1.1. Overlay) there are 3 screenshots, the first is the PS’s way and the second is Krita’s way. The third one is just a theoretical variation.

Okay, so what to do with this wall of information? Here on the testing of the New Texture for Brushes Deif_Lou asked if people would like a option to use the Photoshop way, or Krita way (probably a toggle button). I as in favor of it, but not many people showed interest. Then it was left as is for now.
Yeah, but this was for texture brushes, not masked. Yes, however, here is stated that the code is shared between them. So a Krita or PS ‘blending button’ could be done for the masked brushes as well.

So this is a good moment to again show interest in implementing this option in Krita.

I really like how @Deif_Lou write phabricator tasks: things are clear -even for novice- and there’s always detailed example with pro & con for this or this technical method/math rule… everything is properly argued

No worries. It would not be a transition, more of a combination. But just because of that, a certain synchronization in shortcuts, tool settings etc. would be very helpful. I will try to match as much as possible so that my thinking and muscle memory don’t struggle too much. Krita will be great for painting - for the rest I will have to stick with Photoshop for now.

It might not have come through that clear, but I’m fine with how Krita handles the Masked Brush blending modes. The latest comparison looks very close. The initial issue that started the thread, was a clear bug, which I already filed and was accepted. But as I have saved by transparent brush tips as opaque brush tips now, that doesn’t concern me any more.

Thanks for the links. They will come in handy if I should have some issues with blending modes in the future. For now it looks fine.

Glad you are liking Krita so far. Then there really was a bug huh!? It was especific to Krita 5.0? Thank you for investigating and reporting, can you share the link to the Bug tracker? So others can follow it too.

And overall the Masked Brush is Krita looks more pixelated than in Photoshop,

Did you find if this is because of the bug too? If not maybe the Sharpness or Softness property in the brush option could help anti-aliasing the strokes? I can’t say for sure.

It is Krita-5-specific indeed. I cross-checked it in Krita 4 and there it’s fine. That’s why the bug was also marked as regressive.

The pixelated issue was linked to the Alpha Mask issue - so that’s history as well. Cheers.

Since we are talking about the textures for the brushes, I would like Krita to include some more texture modes such as Normal and Outline, since making marker type brushes is a bit difficult with the current modes

Yeah, but this was for texture brushes, not masked. Yes, however, here is stated that the code is shared between them. So a Krita or PS ‘blending button’ could be done for the masked brushes as well.

So this is a good moment to again show interest in implementing this option in Krita.

I still think that would be nice to add a “PS texturing mode” option someday where decreasing the texture strength won’t cause the brush to become transparent.