My childhood "OC" has evolved

Okay, so I’m going to throw this out here and say that this character is kind of an alternate version of my online persona (which I’ll be making an icon for very soon. She’s an android/“animatronic” that I’ve kept with me since I was around 8 years old, going through a Sonic phase). I’ve been wanting to dabble a little with fusing species/characters just because I think it’s an interesting concept. That being said, here’s J.D., a skeleton-android fusion. 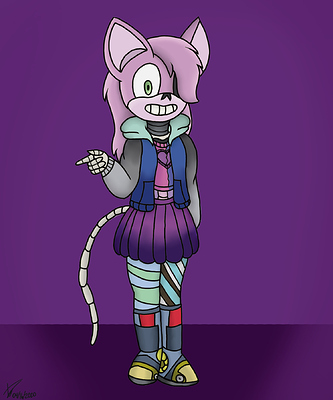 I may end up dabbling with the original .kra file to clean it up more and change the background, but overall it’s more or less done.

For me, personally, there are a bit too many details and colours. It’s distracting and I don’t know where the most attention should be going, aside from a character design aspect concerning the meaning of colours.

I think you should go for a Toby Fox style rather than a Sonic the Hedgehog style. The jacket and the bony tail remind me of Sans the Skeleton from Undertale.

i'm sans. sans the skeleton. Sans introducing himself. Sans (/sænz/ ) is the brother of Papyrus and a major character in Undertale. He first appears in the forest after the protagonist exits the Ruins. He serves as a supporting character in the...

I’ll definitely take this post into consideration when I draw this version of Talia in the near future… well, except for the neck thing (sort of).

This character isn’t really a “Mobian”, despite having been drawn in that style. It was more or less a little experiment on my end to draw Talia fused with a… certain skeleton, and… well… Talia is an android/robot now unrelated to the Sonic series. When I actually draw Sonic Characters (which I’ll be sure to post more pieces in the future for some form of reference), I normally don’t draw the necks.

I’m not entirely sure what you mean by a “Toby Fox” style, but… I can try to keep that in mind >>’

Yeah, I can see that. All I just wanted to say is that Talia really isn’t a “Mobian”. I’ll post more Sonic-Related arts in the future when I’m in the mood to try and draw a few, though.