Maybe this is the way to the future of digital art. Seems similar to actual physical art…hype, collect, resell, etc… Maybe digital artist can actually make a living without selling out to Disney etc. If you’re a digital creative, you might have heard a lot about NFTs (non-fungible tokens) and how they’re changing the landscape for digital artists. But some of the concepts behind NFTs and cryptocurrency are hard to explain, even if you’re...

We discussed this already in another topic, was about a crypto scheme called Crea I believe, can’t find the topic right now. But we basically all came to the conclusion that NFT is a snowball scheme. Very little people actually make money from it and its mostly used to steal from artists i.e. automated bots scrape social media and other sites for popular content and put NFTs on everything. In addition the environmental impact is huge, it can cost as much energy to create one token as it costs to power an entire studio for a year.

If you’re not already a big name your chances of getting anything from it is small and most money is made by resellers or investors who already pump a lot of money into the system.

Simply commissioning artists or donating to them is much better especially because with NFT you don’t actually own the artwork but just a link, many of them already dead because of copyright issues (no refunds of course)

Interesting news story on using block chain tech to create and sell certifiably unique digital art work, called non-fungible tokens (NFT): https://www.ctvnews.ca/mobile/sci-tech/how-a-10-second-video-clip-sold-for-us-6-6-million-1.5331696. Hard to parse the hype from the substance, but I do get the feeling there’s something there, or could be there given time. Not having thought deeply about it, I don’t think it would be that hard to implement. A public Git repository*, commit your art piece, d…

There was another one about Crea but I think it got unlisted when it turned out the same user created many duplicate accounts to advertise for it.

@kacart @Takiro And here is another very interesting article about the subject: “THE ENVIRONMENTAL ISSUES WITH CRYPTOART WILL BE SOLVED SOON, RIGHT?" | Medium

Yes! That too! @oliver

Generaly whenever a new thing comes around that claims to empower artists and promises easy money or gain in audience you should be extra extra extra cautious. Usually the first thought in my mind is “okay, how are they gonna exploit us this time” because in the past everything was nothing but just empty promises. There simply is no easy route to success as an artist.

Some people have no shame and try everything to get stuff for free or take advantage of creatives in some other way. Be it guilt tripping (“my mom/pet/relative died, can I get it for free”), blackmailing (“i tell your family you are drawing lewds”), threads ("I’m doing something to me/you/your partner) or simply promises for exposure. I’ve seen it happen, and have had it happen to me and I’m only a tiny artists who sells just a few pieces once a year or so.

The NFT thing is not different but it hides behind cool buzz words and a futuristic sounding, hard to grasp concept (that would actually be cool if it didn’t have major drawbacks and loopholes) which makes it tempting.

NFT as a “solution” for digital artists is just a dumb idea, everything it can “solve” can be solved without the huge environmental impact that it has. Longer opinion and explanation here, I guess better link than copy/paste: https://mastodon.art/web/statuses/105942506377199352

And a funny comic for lightening the mood: Saturday Morning Breakfast Cereal - NFT 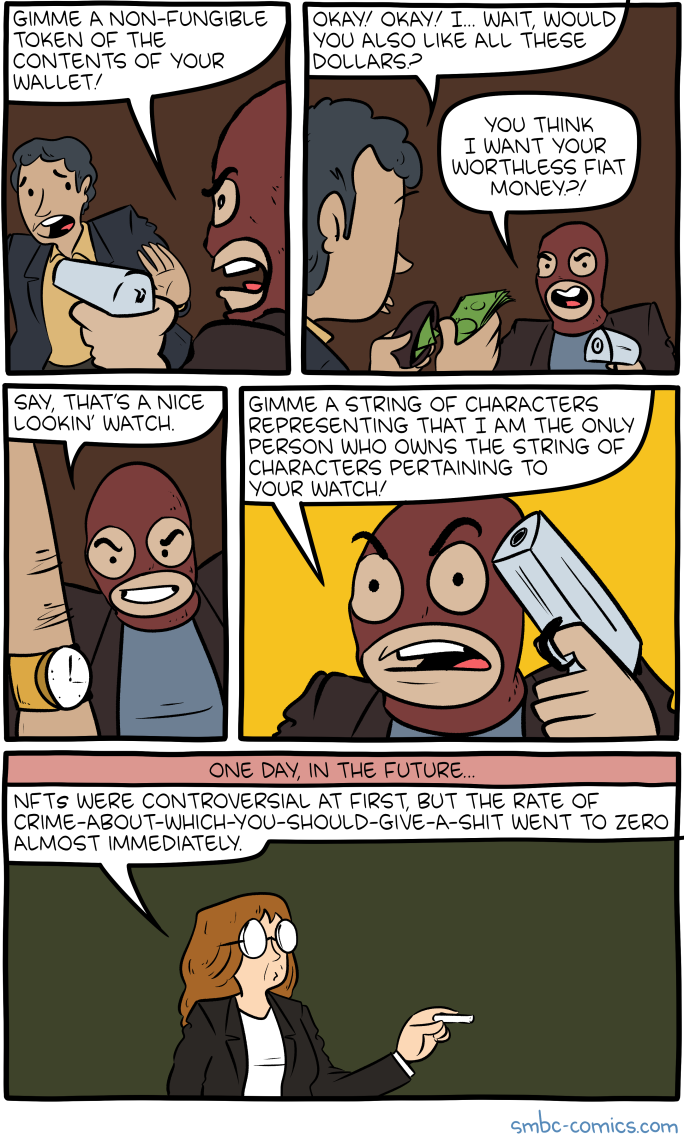 Still one of my favorite SMBC’s although I’m surprised and a bit disappointed it didn’t end in a weird sex joke.

@Takiro The ‘NFT’ thing IS Different. Yes caution is always a good idea and yes people will try to take advantage of anyone offering services (as my neighbor constantly does to workmen, neighbors etc. etc.) but we must also look at opportunities and as I see it this is the first bright spot I’ve seen in digital art for individuals that doesn’t grind them between the gears of the machine. It is a way that can bring digital art to the same playing field as traditional art creating one of a kind artworks (though in a round-about manner).

The artwork is not more unique with an NFT especially because the Token doesn’t even identify a piece of work but just a resource identifier (an URI or URL mostly). Nothing stops anyone from creating multiple tokens for the same artwork. Minting an Artwork with NFT is neither a sign of authenticity nor of actual ownership. If you really want to transfer ownership rights digitally or tell people it’s really made by you sign it with your pgp key (admittedly this relies on a web of trust but it’s not worse than with NFT). PGP is free of charge and doesn’t burn massive energy.

Honestly the concept of owning art like it belongs to me and I control who can see it like it’s hanging in my living room and my living room only, is pretty much outdated in my opinion. Digital* art gave us an opportunity to get valued by our skill and creativity but NFT tries to create value by implementing artificial scarcity (which it even fails to do properly). I understand artists want to be independent and a reliable income but NFT is not the thing (only for a few lucky ones).

Don’t get me wrong. A thing like NFT would be nice to have if it wouldn’t have all the bad things that come with actual NFT. A decentralized platform for artists that guarantees authenticity and ownership and where value of works is not mostly set by share holders.

Of course you can be one of the lucky ones who gets more out of the system than you invested but you still have to live with the moral and ethical implications. That’s something you have to decide for yourself.

Look I’m not going to argue with you about this. You clearly have an opinion. It’s not about ‘controlling’ the art it’s about the concept of an original. It should be unique and verifiable and once it is sold the artist has no more control over it just like a physical museum/gallery/owner piece. (the marketplace will always determine the value…just as with any other work or art…and p.s. the value…the $$ or Rupies or whatever change by the moment)

I don’t know whether it is possible to create multiple NFTs for the same piece or not, but if that is actually possible there need to be stricter regulations. I know the ownership requirements at the moment are pretty lax. That needs to be fixed for sure.

Admittedly this whole concept is weird (but so is currency … legal tender…nothing but paper) but I do see it as a light on the horizon which could allow digital artists to become more like physical medium artists.

I’ll just add that yes there are issues as mentioned in the original article I posted…I thought it a very good summary of the current situation and I look with hope to the future.