Maybe I’m missing something, but when I want to open a file, there’s no thumbnail preview… 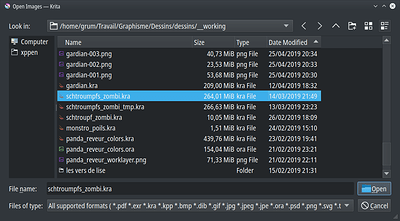 A preview like Gimp does will be a very useful functionality
Open file dialog on Gimp 2.10, under Linux Debian + KDE 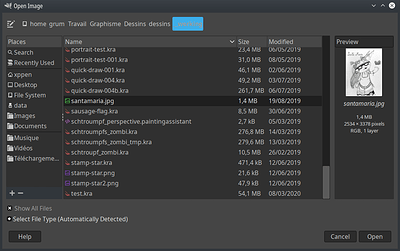 I tried to check/uncheck option in Krita configuration, but it does not change anything… 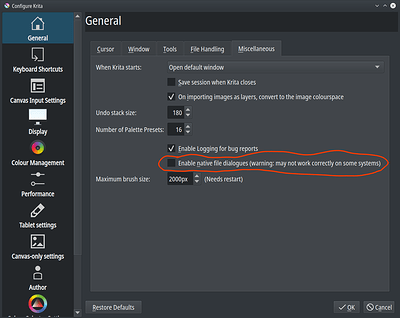 Is it a missing functionality or a bug? Is it relative to my system?

The appimage can only use the built-in Qt file dialogs because the kde plasma or gtk file dialogs are implemented in a Qt plugin that can’t be loaded because the appimage comes with its own Qt libraries. Packaging those platform plugins would mean packagings pretty much all KDE frameworks, and that’s just too much.

I know doing such a thing may take time that is not used for other functionalities, but instead of using built-in Qt file dialog (or kde plasma/gtk file dialogs that is not possible for an appimage), implementation of a dedicated built-in Krita file dialog can’t be an alternative solution?

As a workaround if you use the Krita from the repo you can use the kde file dialog which will have the thumbnails. I don’t know but can you check flatpak too.

@raghukamath thanks for suggestion
But Debian repo is out of date (Krita 4.1.7) and flatpak I don’t know it (maybe I have to test but not sure to want to use anotherpackage/deployment method…)

Using flatpak works fine, at least when you are in KDE plasma. But you have to enable the previews first in the file open dialog.

I need to understand what flatpak implies for my system before trying it.
I’ll try to take time to read documentation and eventually test it next week-end