Hello folks,
so don’t get me wrong. I’m very happy with Krita so far for the fact that it’s free and people are making an effort to optimize it. I use it very much…blider are still to come

But why does it need so much computing power or why is it so slow? If you compare it to PS or CSP, the functions move, resize, cut, paste, etc… it only takes 5 or more seconds for the picture to fit where it should.
What is it that makes this so?

Krita’s code is open, you can try to find origin of the problem

PS and CSP have closed source code, so it’s not possible to determinate how they do to get fast operations

Krita is made by 9~10developpers with a very low budget
PS and CSP are made by Big compagny, with armies of developpers, and a budget that might be 10 or 100x higher than Krita’s budget

Krita is made ton run on Linux, Windows, MacOS, Android (and I think it’s already running unofficially on BSD)
PS and CSP only have to take care to Windows and MacOS

I thought so, maybe it will work in the near future =) the “pencil” brushes are awesome, I haven’t found any comparable ones… it’s great fun to paint with them

What is size of the document you are using? What are the specs of your computer. Have you checked the performance tab in krita settings you can increase the size of the ram alloted to it.

While benchmarking what kind of brushee did you use in csp and photoshop. For me some brushes in csp also lag.

There is always room for improvement but it will take time in krita development.

Move tool actually shifts pixels so it is slower than transform tool.

Move tool actually shifts pixels so it is slower than transform tool.

+1, performance is oddly weak there. Seems like it should just be “draw rectangular subimage at X,Y” and this performance is affected even without layers above the current one, so it’s not an expensive redraw issue in that sense. Maybe the skew/rotate/scaling is always being calculated even when nothing changes there, or maybe it just moves on a short timer instead of ASAP. Not sure as I’m not familiar with the code

For big objects move tool is slower atleast in my experience and from what I know by reading on forums. It is because it renders it while you move. Transform tool works with a low scale preview

Even rendering that ought to be blindingly fast with hardware acceleration in ~2020s. 1k x 1k shouldn’t lag if using the GPU unless on a slow computer. Move tool seems slow even with small images. I’m really curious, now

Krita doesn’t use gpu. It only uses gpu for canvas rendering but not calculation and other operation. Perhaps if you are a developer we would really appreciate any help

I’m working on a layer, if I change the size there and press enter, the image disappears for a few seconds and only then is it displayed in the correct size.
Or saving also takes a long time, these operations are by far much shorter in CSP or PS.

I had files in PS that were about 2 GB… and it ran a lot more smoothly.

But it has to be said that if you have a touch tablet the controls are much better than in CSP or PS, kudos.

If only AMD, NVidia and Intel were to put a developer on GPU tasks like they occasionally do for Blender…

Do you use the same dimension in csp and photoshop?
I can understand the slowdown with that big size of canvas

Have you checked the performance section in krita settings?

What performance should I check? I wrote everything you wanted to know.
What do you mean exactly?

and YES, I had larger files in CSP and PS and there are zero problems with that

If you go to krita settings there is a performance tab where you can assign more ram to krita. It may or may not help to increase it a bit since you have that much ram.

Sorry for repeated questions I was just curious about the file dimension. I too work with file size close to 15k x15k illustration but it is for outdoor billboard adverts. And it obviously lags a bit at that dimension.

I routinely work with 600dpi A5~B5 comic spreads (approx 9k x 6k pixels), and even in greyscale this can get slow, especially for larger painting operations. For colour it’s extra nasty, especially since colour often involves using large textured brushes. I’d really like to move all my work from PS to Krita, particularly since Krita runs natively on Linux while PS (and CSP) does not. 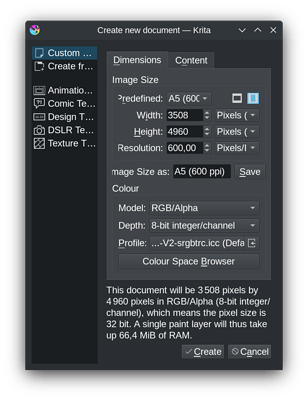 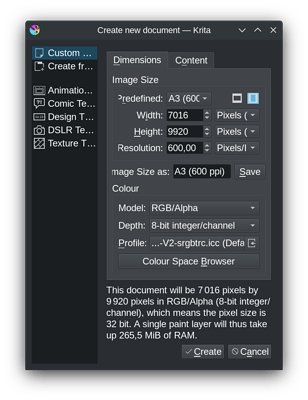 On my side A4@600dpi is smooth on my laptop…
Need to use my desktop for heavy filters/layer style operation, but it’s usually Ok.

One thing: I can’t compare with proprietary software as i don’t have them

The number I gave is for B5, and as I mentioned, these are spreads (so twice as wide), and with bleed, so the actual documents are larger than B5.
Here’s what that is without bleed, and only one page:

GPU painting was asked for a lot of times but the developers explained that copying data from RAM to Graphics Memory and back completely offsets the performance boost it would give, among other issues it would have (like suddenly your memory limit is that of the graphics card which is normally less).

Request : Optimization on the graphic side of Krita(target GPU performance more) Feature Requests

Sure, but it’s quite complicated. We’re already having trouble trying to support all those platforms, and now trying to find a good GPU computation framework? That’s difficult. We’d probably have to write the whole code two or three times (because CUDA only works on Nvidia, OpenCL in theory should work but there are some issues, thrust is based on CUDA only, there are some custom ones for AMD, who knows what Apple invents next year, too…). Moreover, I believe it was once considered but… the spe…