Hi,
When I upload the video generated with the recorder on social-medias; the social-medias often create an auto thumbnail based on frame 1 of the video. The problem with the Recorder docker; this first frame is often the blank canvas. Example: 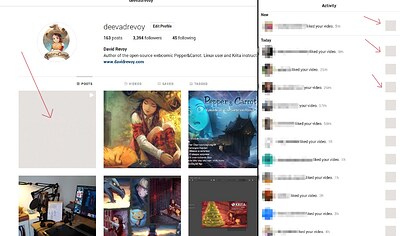 That’s why here is a feature request to also get an export option to show the result on the first frame of the exported movie, for a certain duration. Here is a quick mockup: 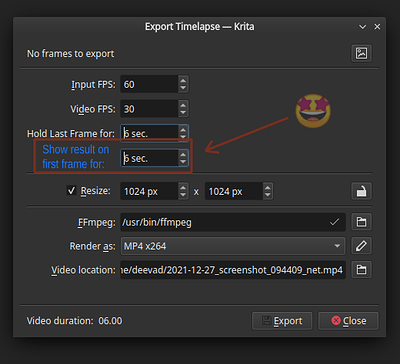 I hope this wish will inspire a developper. Have a good end of week 2021

I agree, also because just watching some random process video, it’s good to first see what the result will be. Helps frame the process.

I think procreate app too adds final result first and a default wipe effect and then starts the timelapse.

From my understanding it should not be so hard to add this feature in. I think it would be almost the same logic as the “hold last frame for option” except starting at first frame.

I hope this wish will inspire a developper. Have a good end of week 2021

You’ve insipred me I will give it a try. Hopefully it is not much more difficult than I think it is

If you need it now, copy the last picture and put it first, and then modify their names to match the current order.
Then export the video.

Maybe it will be faster to write a script to automate this process.

This is Google Translate.

Well it wasn’t quite as easy as I had hoped but I did end up figuring it out I think. I have a merge request open to add this feature in and hopefully it will be merged.

If you want to test it out and you are on Linux I made an appimage you download. Let me know if you encounter any bugs when trying it out

@Reinold I’ve just tried the appimage and it seems to work well.

I haven’t exercised all options but the ‘last frame for n seconds at the start’ works ok in my simple testing.
Thank you

Many thanks @Reinold for the feature!

I’ll join testing on the MR later this week

(edit: I couldn’t resist a quick doodle (posted on the MR) with the appimage before going to sleep. It works perfectly. Good job!