The way the function would work: The opacity of specific pixels on the active layer are changed into the brush’s chosen opacity when your brush-stroke touches those specific pixels.

Example 1: A sketched letter J is located on a 100% opacity normal layer with other visuals inside that layer. The pixels of the “J” are at 72% opacity. Your brush is now at 42% opacity and with “replace alpha” blend mode. You draw the letter “J” on the canvas right where the J is. The J now looks lighter because the pixels where you laid down the brush stroke are now converted to 42% opacity.

Example 2: Your boss hands you a messy dirty lineart whose opacity values are all over the place and inconsistent. It’s 23% in this corner, 40% in that corner, 87% in that corner. Yuck. He instructs you to make the values all 50% consistent without messing with the layer properties and without creating or deleting layers. With the blend mode in handy, you set your brush opacity to 50% draw over those lines and get a clean consistent 50% like the boss wanted.

Why I want: This is useful for situations where you need to build up a consistent low-opacity line, shadow shape, or base color on a character with mutiple strokes without having to worry about inconsistent values from the buildup of brush-strokes. It also lets you later come back to the desired area and make clean changes to opacity if you change your mind later.

The problem with regular eraser is that you have to eyeball the value of your brushstrokes until it looks somewhat okay, and you have to redo your shapes if the values end up inconsistent. And adjusting opacities via layer opacity is problematic because it affects the whole layer when you only want to adjust specific areas. And cutting and pasting parts onto new layers just adds extra steps that throws off your workflow.

This blending mode lets you jump right in and make adjustments without having to play around with layer settings or cutting and pasting. The opacity of your desired pixels is adjusted quickly and you continue working on the layer without stopping.

The “Greater” brush blending mode already lets you create consistent low opacity lines. But its limitation is that you can only go up in value. A brush at 40% will not affect pixels on the canvas at 60% with “Greater”. This “Replace alpha” mode lets you work at values both higher and lower than what’s current on the canvas.

Isn’t this what Destination In Mode is for? Also filter brush using color adjustment could be used for this.

He instructs you to make the values all 50% consistent without messing with the layer properties and without creating or deleting layers.

That kinda sounds like a math exercise - cause come on, your boss wouldn’t care what you do with layers before you give them the file back when you can delete/merge additional layers anyway…

Why I want: This is useful for situations where you need to build up a consistent low-opacity line, shadow shape, or base color on a character with mutiple strokes without having to worry about inconsistent values from the buildup of brush-strokes. It also lets you later come back to the desired area and make clean changes to opacity if you change your mind later.

Also have you tried selecting and using Filter -> Adjust -> Color Adjustment with “Alpha”? here how I changed the whole stroke to be 33%: 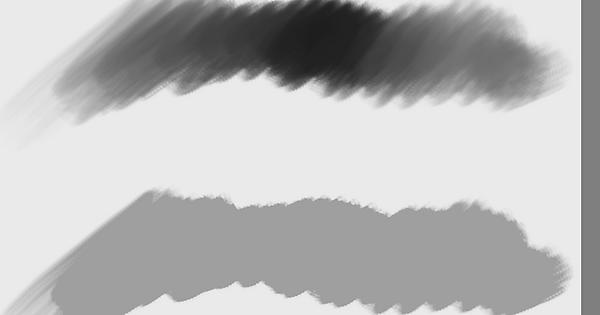 Also if you tried it, you’d easily see why the Replace Alpha could not work exactly well… what about pixels with 0% or a very very low opacity? Their opacity will increase and it will stop looking as you probably expect it to look. With the filter, you can make it so the alpha there is still decreasing to 0% so it looks natural: 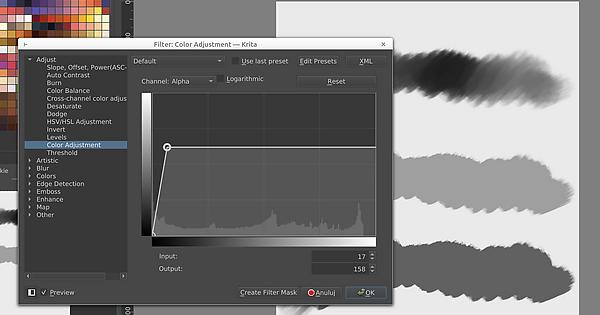 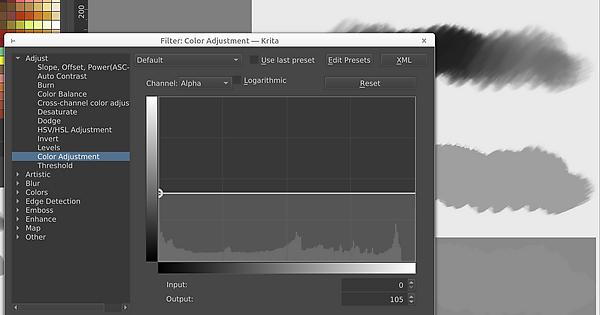 (Yes, this rectangle is the stroke.) 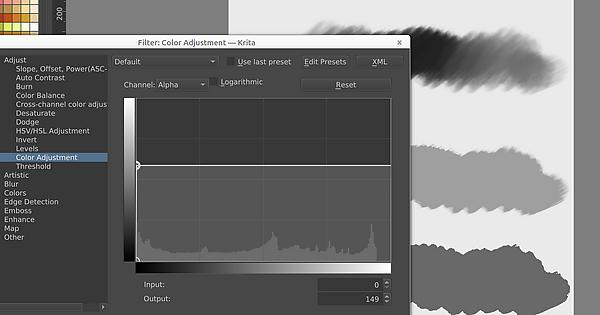 My use case is this: Sometimes I need part of the pixels to be at a specific lower opacity than what is already there. My issue is that my lineart would be too opaque, and I need something probably half as opaque so I can get a sense of the base colors underneath my line layer. (Sometimes my partially opaque lines blend better with base colors than the lines being completely opaque.) “Greater” wouldn’t help me in this case because I can only make the lines be more opaque, the opposite of what I want.

I wasn’t aware of the color adjustment option that you mentioned, though. I did try it out today, and I guess it technically works. It makes selections more consistent and less opaque, so that’s cool. Thanks for showing me. My only observation is that the filter depends on making precise selections on the canvas, and you need to revisit this filter window over and over for further changes later.

Sometimes I like to go fast and quickly change my pixel opacities. Here’s a video that visualizes how I like to work sometimes:

As you can see, I am changing the pixel opacities without dealing with menus or layer opacity sliders. I know that the demonstration in the video isn’t the most precise, but it works for me because I can quickly change to my eraser after getting the desired opacity and just fix the look of my lines that way. For me, this is less precise, but much faster, and I like the speed.

The other nice thing about this method I’m showing is that you instantly know what percentage opacity you are laying down. In contrast to the color adjustment graph, where I can only guesstimate the percentage.