Princes Luna from My Little Pony: Friendship is Magic but as Sailor Moon (or the other way around). 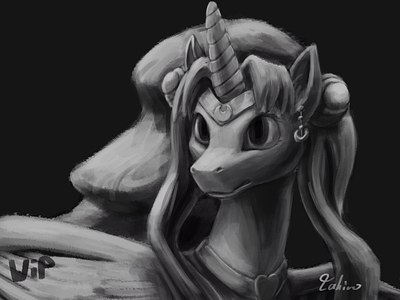 sailor_moon_luna2000×1500 416 KB
I appreciate any help especially regarding anatomy of this royal Alicorn. I can sense there is something wrong but I can’t quite put my finger on it.

It’s done. I’m done. My take on the Sailor Moon redraw challenge. [sailor_moon_luna__web_small] Thanks to everyone for your good advice in the WIP section. If you want, you can vote for the next Princess here. Will be no Sailor Moon this time, though.

And yes something seems a bit off, but I can’t quite pinpoint it myself either. Somehow it feels like the nose points more to the left than the eyes suggest, but trying to correct it with the liquify tool mostly made the nose look shorter…

Looks great to me structure wise but I can’t read what that bump is behind her. Granted I don’t know the source concept.

Maybe that’s a little better. And it was rightly pointed out but the shapeless piling up from behind. 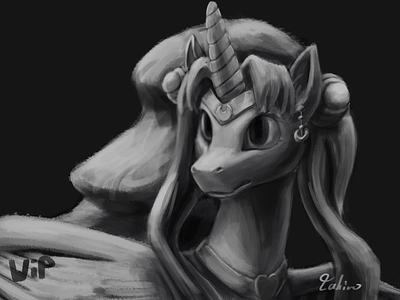 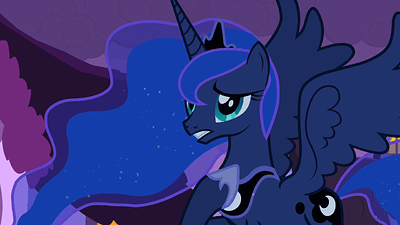 Yikes, that is an issue. I cant even imagine how to tackle that. The proportions seems correct to me though and the only thing I can see is the left ear appears too far away from the head. .

The values are great, and the volumes seems correct, the only doubt I have, is the masse behind her (like Sineater)
Perhaps you can push back the values of this element (more dark) to detach the character

the masse behind her

That’s her mane. Her original design doesn’t have hair in the traditional sense of the word 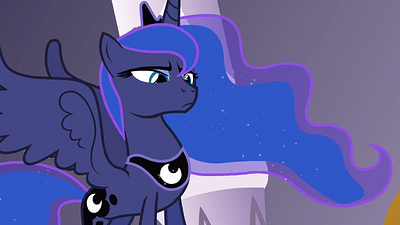 I tried to give it some volume but that didn’t really work, apparently. making it a bit darker so it is more in the background is probably still a good idea. I give it a try.

For the mane, you can reduce the volume and luminosity, and make a stronger difference between the inner & outer mane, and add some star to the inner mane

Examples to illustrate my thought (made quickly and dirty 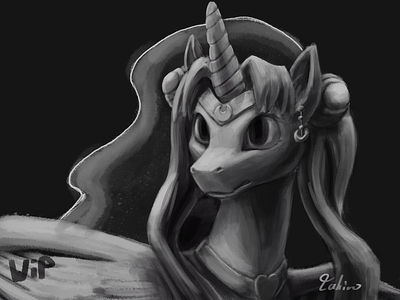 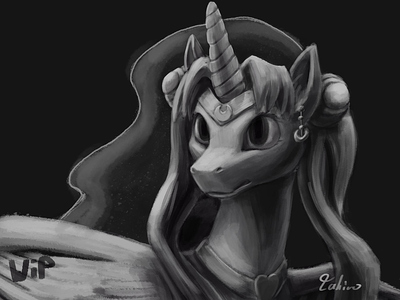 Looks good. That was also my plan B, kinda. I often have so much fun painting hair that it didn’t occur to me that my usual approach doesn’t quite work here x3.

And maybe, by adding a background, you can enforce the mane effect with some transparency like the model you show us

Did you think to colorize it or to keep it as black&white?
(I like the b&w version)

It gets color and everything at a later stage. This is just my under painting to get most of the shading and the volume. The values of the local colors and pretty much everything is still missing at this point. Like a 3D model without texture. I don’t plan to have much of a background for this one. Probably something that can be visible through the transparent parts of the mane.

Another thing I forgot is the ‘black hole’ on the right side.
I suppose the mane is following the yellow line, but by following the purple one, it will avoid the current ‘black hole’ that is too big and give an unbalanced effect to your composition. 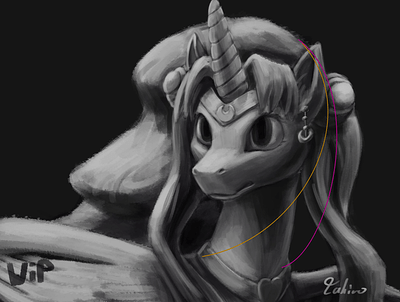 Good idea. I think I even had it like this on my sketch where the mane was more like on the original.

The snout issue is like one of those annoying perspective problems you can spend hours staring at and pushing paint around trying to fix. I hate those!

I tried after you first posted it and went for moving the snout round slightly, but found I lost some the original shape in the process.

Sineater mentioned the ear - if you draw some perspective lines it seems to be out of line a bit.

As you’re reinterpreting a flat design into 3D, maybe try turning the mane into more of a nebula cloud as it moves away from the head? I think that would be in keeping with the original design, and you wouldn’t need a background to make that look effective.

One thing I really like in the references is the expressiveness of the character. That’s obviously easier to pull off in a 2D cartoon, but maybe tweaking the expression in your drawing would elevate it further? It’s something I’ve often neglected in my own work - but I’ve become acutely aware of it since trying to do comics.

Overall it’s looking good so far though - nice work on the values!

The snout issue is like one of those annoying perspective problems you can spend hours staring at and pushing paint around trying to fix. I hate those!

I tried after you first posted it and went for moving the snout round slightly, but found I lost some the original shape in the process.

I shouldn’t have said it

I thought perhaps I should add the link to the finished work.

It’s done. I’m done. My take on the Sailor Moon redraw challenge. [sailor_moon_luna__web_small] Thanks to everyone for your good advice in the WIP section. If you want, you can vote for the next Princess here. Will be no Sailor Moon this time, though.

Thanks everyone for your helpful suggestions and hints.

When there’s no color it looks kind of like a statue.

actually a nice idea for another artwork.

Why does nobody know that the shape behind Luna is her mane?