I am very familiar with this Photoshop feature/workflow where you can change brush size and hardness at the same time with a simple click and drag. All the while being able to preview the tip overall shape.

I believe it is called dynamic brush preview. And it goes like this:

Press shortcut (very similar to shift+drag for size in krita) and drag horizontal for size and vertical for edge hardness (I believe this is called fade in krita; at least in the pixel engine, and it is separated in 2 sliders).

I mean, the sliders granular control is great but sometimes you just need speed, and being able to change both at same time without needing to dive in the menu would be awesome and a game changer for me.

You could go from airbrushing a shadow to a crisp detail hard edge in a single motion without changing brush at all.

The framework seems to already exist for the size click and drag function, so it seems to be an easy implementation, but I know nothing of coding so correct me if i am wrong.

This feature or something similar would definitely make me let go of adobe for most stuff I need, and I bet many artists from the krita community would also love something like that, they just don’t know yet

Its something you don’t know you need until you use it, and then you are hooked for life. I cannot live without it.

There are so many applications:
I use it a lot for editing even and, though its not the focus of the software I understand that designing and illustrating stuff also involves editing.
And there’s no better way to use it than when liquefying stuff. You can preview and change the area of effect so much better than guessing.

Thank you devs for the amazing work yall do for free!

Not the feature you are asking but might be useful, krita can change edge softness with pen sensor (pressure for example) 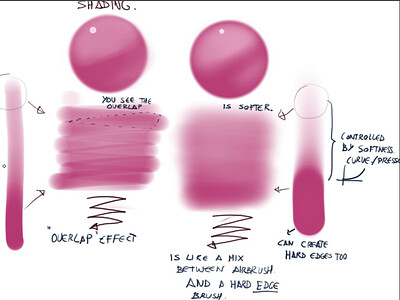 Thanks for the tips, but it’s not really the same since I’d rather leave pen pressure to control only overall opacity or tip size depending on the task in hand, often just one or the other. Otherwise I’d have to forgo some versatility.

Then you go block down some fast work. Suppose u work in value to only color afterwards… then you can block down shapes and sculpt the shadows much faster if you can change brush edge hardness without changing brushes…

In one single motion you can go from applying a soft shadow to a fine crisp line for a detail or go eraser mode to carve out some edges… all in the same brush, with the same shortcut.

If you use pressure to change edge hardness and you need to make a fine hard detail then you will have to keep high pressure all the way not to loose definition, and tou will lose the ability to vary line width.

So thats why I often use one or another.

That’s such a powerful feature, you only get what it’s capable of when you start to use it, it makes any work a thousand times faster cause it can be used in any brushtip/eraser like tool. To control anything that a brush would… Distortions also if you’re in liquefy mode. Stamp tool if you are retouching stuff… and thus can better control the seams of the stampings.

Sometimes stamping and/or healing brushes are more effective if it’s edge hardness are adjusted according to the texture/detail level of the affected area, thus you could make seamless correction much faster without artifacts of visible failure in the desired texture.

Say you want to edit some imperfections out of skin without losing pore texture quality and end up with wax-like skin. Each area would demand different hardness to size ratio. Combining both in a single shortcut thats already there doesn’t seem too hard and would be only reasonable.

I know the software is not intended for editing but its part of design/illustration processes and I don’t see why it shouldn’t be used for that to if people saw it fit.

I for sure would use it for photo manipulation and editing as well as illustrating if that feature was implemented.

It’s so fast once u begin to use it, it turns into a must have pretty fast. You kind of forget what it was like before.

Can you remember the world without Smartphones?

It could be an interesting feature but while you say " the framework seems to be already there" i doubt it’s that simple. As if that was the case we could have brush rotation as a shortcut already. Though i would like to see these being implemented someday

Yeah, basically the core problem is that Krita’s brush settings system is really complex, and at the time only size and eraser settings were plucked out to be easy to modify.

@dkazakov is looking at completely refactoring the brush settings, but I am unsure if this specifically will be tackled. (The code will become much more readable for sure, though, which is a boon for people developing it

Yeah I must be wrong there, but I am sure I am right when stressing the need for this feature!

I am hoping for this feature for a long time now but I never asked cause it seemed so obviously needed that it would eventually be implemented.
But then I realized nobody ever asked because it’s such a hidden gem of Photoshop and a pretty advanced trick that once you learn you can’t live without.

It seems hardcoded as well and you can’t really change the shortcut. It’s even different in win/mac OSs and once I needed to use it on a Mac it took me sometime to guess the appropriate name of the function to be able to find the correct shortcut on Google.

I guess I saw someone call it dynamic brush preview once but I can’t find it anymore. I have once needed to know its name for bugging report since it used to stop working on early Photoshop versions. And as they say "once you go black…

Anyways its such hidden feature that even great artist I follow sometimes ignore, but I know I have seen a couple of great illustrators and photo manipulation gurus out there abusing this shortcut so much that loosing it would crippled their workflow drastically! Myself included, and some colleagues!

I could easily convince some of my fellows to try krita for their needs and be sure they would only miss this simple but great feature.

I just hope some blokes with photoshop background would back me up on this one!

We could be democratic about it and go further asking for the option to setup which brush aspect would be mapped to each axis.

That might unlock even snappier workflow possibilities, who knows?

I just can’t se why not use both axis for different brush control. It’s so intuitive and efficient to put 2 different controls on the same shortcut. And the preview ghost on the cursor for the opacity graduation check just holds it all together!

In case you don’t understand the concept you can see it in action here:

I also like this request, I made a similar proposal here: Brush settings GUI

I use this shortcut daily for multiple tasks in photoshop.
If that becomes a thing I could finally move completely to krita.
Please make it happen
Thank you devs for your work

Nice, I use it so often in Photoshop, it would be great to be able to port my workflow to krita! Please make it possible

The blur can be change granted its in soft/ blur edge and not the hard edge type of brush.
Hologram as he mentioned have a proposal for click and drag.

My wonky plugin - have a softness/ fade slider [because i want this feature too lol] to compensate for now.
but it cant switch to brush tip type - so if its hard brush it cant. Its buggy i cant recommend.

so i can say its possible - but i dont know the complexity of code to say how fast it can be implemented.
Im still trying to study the brush ops. in hope of rewriting my plugin.

I hope Holograms proposal can be revisited for implementation. It add more feature to the tip.

I have been testing and I may have been ahead of myself, the most useful preset for me is not really the fade sliders but the gaussian with a curve.

It seems to achieve better the result im expecting cause its not linear like the fade and you can make the borders vanish in a smoother rate.

The gaussian with a curve would approximate an airbrush better which was my reason for needing the feature. To exchange faster from details to washes of color.

But that seems to be even harder to make work since you’d have to have the axis of the shortcut control points in a curve. How could it be possible?
Like a fixed preferred curve that moves on the graphic or just the beginning or ending point of it?

Am I being too confusing?

Sorry I am not in front of the software.

Anyway… maybe im just too used to Photoshop and expect it to behave similar. I don’t really know how they do it on their code. Just seems to me that when I use the fades, the very borders almost don’t get to full transparency. Maybe it gets but only the last pixels.
So the curve can make the core opaque and the border vanish yo nothing more softly.

I would need to make more testing.

Thank you all for your opinions and for contributing.