How does it work? I have the snapshot highlighted but how do i save it to upload.
And the dropper that is shown with the simular color does not show when making the snapshot…

Overview of the snapshot docker.

Edit: You have to save every save-state by hand via Kritas standard file-dialog. → File → Save (as)

I did see that. But ii guess it is for a snapshot of your work, not to make an uploadable screenshot. Because if there is a message or tool in view that vanishes when you take a snapshot.

Snapshot docker is for artwork “undo state snapshot”, not for taking screenshot.

If you want to take screenshot, go to Windows search and search for “Snipping tool” (I hope it hasn’t been taken down in Windows 11 by Microsoft).
Press “New” and you can make a rectangle selection on screen for screenshot and can save as, it will also put screenshot in windows clipboard, so you can right click in the forum text box and “paste”.

Sorry I miss this message. You may need PrtSc or Print Screen on keyboard to catch it (full screenshot), then paste to elsewhere to edit.

Printscreen does not work in W11 so i use the snippingtool instead. But still the message or tool disappear.

Printscreen does not work in W11

Hmm…strange, it should work as a system botton.
It will only put screenshot in clipboard so it need to paste on somewhere ( paste in krita for exapmle), in case you miss that.

There is a “Delay” option, but only up to 5 sec…not very handy.

It works as it always was, even in Windows 11, MS didn’t change that behavior. On some Laptops/Notebooks, you additionally need to press the FN-Key with PrintScreen. But you have to do what @Lesqwe56 said, insert the taken screenshot into another Software and save it to disk from that software.
I hope your talent to make that tools no longer work as expected, hasn’t disabled this shortcut.

@Marion666: Some time ago I wrote a small general description on how one can take a screenshot in Windows and insert it in MS-Paint for further use, you’ll find it under the screenshot in the post linked below.

@Takiro asked you to set your “Brush Smoothing” to “None” or “Basic”, you can find it in the “Tool Options”-Docker when you have the Brush selected as the actual tool like the following screenshot shows. On the left side, in the so-called “Toolbox” of Krita the brush has to be selected, and if you haven’t changed your Krita user interface yet, you will find on the right side the “Tool Options” and, if you haven’t selected it already, after a click on it, you can see the options for the brush too…

If you need to include the cursor in a screenshot, then you need another tool, because Windows can’t do that. You can use the freeware picture viewer IrfanView for that, for instance. There are a few more tools, but I don’t know them by name.

i never knew i had an FN key, but thank you, now printscreen works.

I downloaded rfan view and tried every option in screen shot but none of them show the cursor…has that also to do with my talent to make tools not work?

Lets say, I can’t rule that out.

Here is a little description of what to do (some things may be named a bit different, I’ve translated it from German, but I think you’ll find the needed things):

Start IrfanView.
Press C on keyboard, to open the screenshot-options (or open it via “Options”, “Take a Photograph/Screenshot”).
Under “Area” select the Option “2) Screen – Current Monitor (Mouse)”.
Then, on the top right, assign a key combination that triggers the screenshot. The default one is CTRL + F11.
Below that, check the box “Take a photograph of the mouse pointer (not for 5, 6)”.
Then, click the Start-button at the bottom of the dialog-window. This minimizes IrfanView.
Now open the window of which you want to take a screenshot.
Move the cursor to the place where you want to show it on the screenshot.
Then press the previously assigned key combination.
Then you can insert that screenshot with CTRL + C into any application that can handle pictures, so IrfanView, Krita, MS-Paint, etc, and save it as a picture.

pffff…a lot to get my old brain around. Took me half an hour but in the end i got it 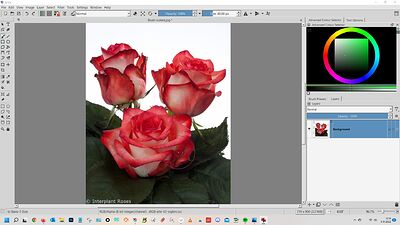 And sorry for going off-topic:
You and your old brain. Why do you always push your oh so old age to the fore?
I’ve been living in a nursing home for years, and it doesn’t stop me from offering my often crude solutions to others and from tormenting them with my opinions and views that are often perceived as old-fashioned. (Like this

)
You at least still look in the manual and try everything,

but things like looking in the manual first, they don’t go down well with today’s youth. They are used to mom always helping them out of trouble, so why work out solutions yourself, rather ask every little thing in the forum. That you with all your trying out times here and there something misconfigures, such as the brushes, that’s normal, and I think that’s okay, you want to at least understand how it works¹, but many are afraid to try something themselves, they always ask first whether they have to press this or that button, instead of just trying it out.
If 40 years ago we would have written a letter to the programmer XYZ every time something was unclear to us, we would have had to wait ages for the answer by the mail-variant of that time (these were texts on paper, carried by so-called post-men who went from house to house, to deliver these letters

), and the computer world would not be where it is today.