I started learning inking (my first and so far only inked images below). I’m still a beginner overall.

In the pictures I kinda came to like the faces, even hair and legs and shoes (though the big large shoes I don’t like that much, the shape turned out a bit weird) but as you can see the shadows of loose sweat shirts are just wrong. I’ll need to practice clothes more so if you have any advice on the inking or anything in the images I’d appreciate it so I can improve better hopefully

In both images I especially don’t like the sleeves:

In the first image on the left side I tried to make smaller areas of shadow and light to show creasing but it’s horrible, looks more like a mess then creases. In the middle I tried to use just a few shapes and pretty large which I think worked really nice all things considered, on the right sleeve I tried to make the shapes a bit bigger and changed the way I approached them (in both cases I’m trying to consider where a light and dark could be depending on how the fabric folds, for both images I had reference photos) but I pretty much failed entirely on making the sleeve a separate shape overall from the mid part of the sweat shirt.

In the second image which I actually made first I again think the creasing didn’t really work out. The rest of the image I think looks pretty nice especially considering my current level which is not really high

In both pictures I wasn’t really focusing on the cast shadow on the ground, I know I messed up the shadows but I just wanted to have something to anchor the figures so they don’t float.

For future reference of style I’d like to get close to how manga artists ink, for now I’m trying inking without hatching to learn more about shape design, I do plan to add some mid value and eventually give it a bit more of a greyscale rendering with similar shading you might know from mangas made digitally. 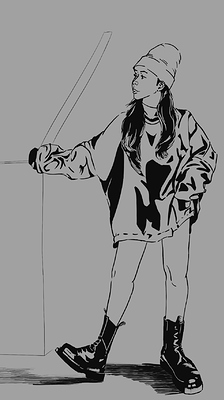 In my opinion, there are many folds for comics on clothes. You need to draw only a few basic ones showing the shape.

Yeah I think so too, that’s why I tried it a bit differently with the black inked picture, the middle part has just 3 big major shapes nothing really much more about it and it feels more solid to me too.

For your first attempt at inking these are pretty damn good.
I’d say improving your line weights will take you to another level.
As for the folds, the black one has too many folds on the sleeves and they don’t seem to follow a specific direction.
But clothes and folds are something you get used to by time so don’t worry about it and keep up the good work!!

Hm, I tried to vary the lines a bit but now when you mention it wasn’t really that much effective for sure xD.

Thanks I’ll try to make it a bit more interesting next time. I was using a pretty simple brush with little variation so it’s similar to those thin markers out there. I’ve already made some changes to the brush after the sketch so I’ll try to think about the line weights a bit more differently now.