Implementing a + Temp Stamp button for a temporary brush that doesn’t pollute global resources would be helpful.

The temporary brushes would be available only in the current document or if that’s too complicated, I guess they could be discarded when we close the app. 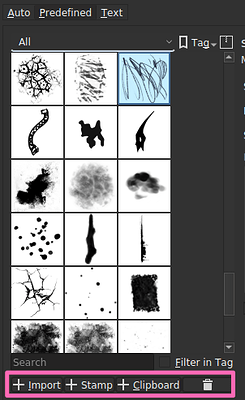 But I’m open to other suggestions.

Since this is supposed to be for fairly non-intrusive workflow it might be useful to have a button in a new docker that has a button + Temp Stamp, a remove button, and a preview of the brush + brush tip.

When activated, the paintoppresets will be forced to use the temporary brush tip, overriding their current brush tip.

We might need some other was to signify to the artist that a temporary brush tip is overriding the presets, other than just the docker.

This allows us to use graphic shapes and temporary selections as stamps or brushes for a single quick job without worrying it will increase the brush tips collection indefinitely.

At the moment, one way to work with custom temporary shapes is to make one on a layer and keep duplicating the layer, but this method is fairly slow.

That is other than making a bunch of brush tips that end up in the global resources.

In another thread, I blurted out that a brush tip docker would be neat, but didn’t have time to go into it more. Here’s what I was thinking of: [image] So with a shortcut, a sample is taken from the current canvas and added to the brushtip docker. The sample taken is immediately added as the new brushtip for the current brush. You can change the mode of the brushtip in the docker - Color image, lightness map, alpha mask etc. You can also edit the tip in the docker by painting on it. Any chang…

Hey, I often create brush tips on the fly. I don’t think my brush collection is indefinitely growing. I just name prefix them with ‘zz’ after I press the ‘+stamp’ button. This way, they go to the end of my list and never pollute really my collection. Easy to clean up too.

Having them saved somewhere feels better IMO than a temporary system. If I have to end my painting session, change the brush settings a lot, crash, or any random event, I still have the brush tip accessible in memory.

That’s why I’m questioning a bit about adding a new button in this case.

I do it similar but sometimes I forget and wished the brush tip would at least get an automatic tag or something to better filter for it later.

That sounds like a workaround, or another way to put it - a non-user friendly way. I see what you mean about the crashes etc. My solution suggests tieing them ti the current document so they should still be available after crashes.

Also to be clear, this is a solution for brush tips only, not other paint settings so instead of messing around with termporary paintoppresets, I’m thinking of the docker example just overriding the current brush tip, possibly with new spacing settings, but that’s it.

Looks similar, but I think the functionality is different. Perhaps the two ideas could be merged together. I can see that

You can save the image of a brush tip in a document even now, just put it in its own layer and hide and lock the layer, and it will always be there. If you need this now, you copy it to the clipboard and add it to a preset.
Then all that’s really missing is a (stamp) preset reserved for populating with brush tips like this, and I’d personally be happy with that. Because, in case I need this brush, I select the preset in docker copy the brush tip to the clipboard and add it in the brush editor. This is done in seconds.
Since I only have to do this once per session, it’s not a big time eater.
But I don’t think you like my idea, you give the impression you really want to have this docker. On the other hand, you don’t show any real interest in it, you didn’t even vote for it yet.