Think your project is taking too long?

Cartoonist Lars Martinson spent 13 years producing his graphic novel! Later, of course, he realized that he could have completed the task in less time if he had observed a few things during the process… and he shares his experience in this video: 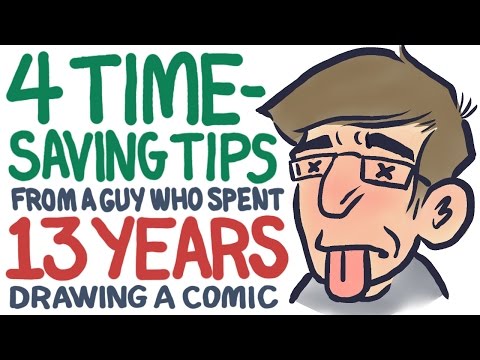 It’s a great vid I watched a long while back, I’ll give it a rewatch since I should always be reminded how to keep my projects shorter.

Thanks for sharing, I’m sure this will be useful for others here to watch.

Well, often the simplest way is the best. I learned this once, when I wasted a lot of time detailing an element in an illustration… only to see that element was expendable, as well as distracting from the main element of the drawing.

I know some people just want to do it as short as possible however I like the entire process of making something. I like doing characters and scences and taking extra time gives me multiple oportunitties to modify/change something about the character or landscape (such as a building, character outfit, etc.) When I am choosing the outift of a character for example, I’ll layout the different outfits like this (image used as a example, it is not mine): 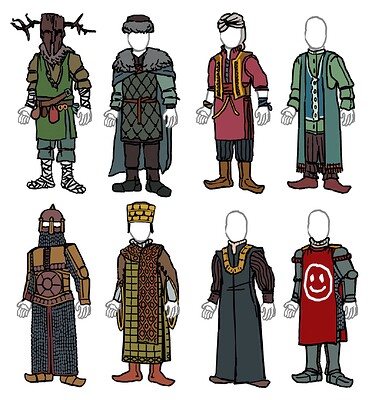 Yes, I also like certain processes: so much so that I even created an “alien” font for a project of mine. The question is whether the process is helping or hindering your project.

For example, these characters’ clothes are really cool… but they add extra work to design. Imagine drawing characters number 5 and number 6 in an animation! In comics, these details are lost in small frames, just look at the thumbnail of the image to reach this conclusion.

One solution would be to redo the drawings in order to achieve a balance between beauty and practicality: note that the clothes of characters number 7 and 8 are simpler… and yet they work well.

This is important, and i think every artist will go through this at some point.
I created in 2000 a children’s book about a " Lil Pup" I hand painted even though I did do digital art back then. The scaned images never looked as good as I wanted them to. there still is parts I love about the original project. I decided in 2018 to make a Lil Pup calendar. This time it was all digital with hand picked brushes ( this now I feel was a mistake, because me needing to try to recreate those obscure brushes in krita had been a setback ) However, from 2018 to current, I created sets on layers, and ‘prop’ objects. By doing that my 2021 and 2022 calendars were streamlined and easy.
Currently my bottleneck in work flow is the 100’s of project pieces in csp format.
In future, a format ( with layers ) that is universally used is needed, so I am defaulting to try to remember to save now in photoshop (.psd)
eventually my “style” I used in csp with those brushes will graduate out, and in to my new brushes.

Some of my prop pieces, like certain leaves, I will turn into brushes soon in krita, that will speed up things some.
My biggest block “this entire year” til August, has been loathing Windows 10, hating to go over there and use csp, and wanting features on krita ( that were there, already ) but i didnt ask (sooner )

csp users, that come to krita will miss the hard edge brush, but I am attempting to make a couple brushes to work similar. but also, I will say krita’s brush engine is amazingly better.

I have downloaded a few brushes from other folks too, that have been really nice.
My worry about putting out a brush set of what I am working on, is my memory problems that most likely will be me forgetting what brush I used as a base and some times those settings are what was key to my new brush.

A bit of a ramble there… But yes, I have not got my work flow where it should be, It is slowly improving.

In many cases, the best policy really is to keep things simple. At least in the beginning: this way you can manage the project. did I do this? No, I took the exact opposite path… and my projects failed.

There was a time when I wanted to work with comics… and I had the (ridiculous) idea in my head that a story should have twenty pages at least. And it should contain a lot of narrative text. If the script didn’t have any of that, for me, the story wouldn’t do any good.

I would start writing a screenplay, lose focus on the second or third page (sometimes even the first!) and end up giving up halfway through. I took another idea, started a new script, it didn’t work… in the end I ended up with a lot of pieces of ideas and stories.

Then there was a comics contest at the company where I worked. However, there was one rule: the story could not be longer than four pages.

Even though I hated this rule, I decided to participate in the contest.

To my surprise, the story turned out better than I expected. She wasn’t extraordinary, but she had something amusing about. There was almost no text, as the characters were aliens, their action in the frames was more important to communicate than their words.

I didn’t win the contest, I didn’t work with comics, my life took a different turn… but this experience helped me evolve in some ways.

While, I agree about the brushes, I have created a number of them in Krita. Each based off brush tips I made, for the main reason of speeding up my work flow for conveniance.
I dont have many items to improve an interior panel for my calendar, but for the outdoors ones, I created a variety that can get me a fairly good finished image in a few minutes.

This years bottleneck for me, was working in Windows 10 because I grew to loathe loading it up.
making the new brushes in Krita to fit projects I had worked on in other program on windows, has restored my productivity I think hehehe.
I’ve put out a handful of art pieces, since.

So, one of the best things I ever did, was make some leaves for shrubs from my earlier cartoon ( part of the calendar ) I used to take those, and place them in clusters to make a nice shrub, could take me some time to do.
In krita, I made the leaves over, and was looking for a good brush to put them on for what I wanted ( I was expecting to be happy wih a simple stamp but… ) what I did was add the leaf pattern, to the impressionist brush…
try doing that.
It is very pleasant.
Its like " Popping Bubble wrap" pleasant.
hehehe a nice brush as is, but with leaves on it, it is awesome.