I haven’t merged it, though, because I want the opinion of the other people on the team, until then it won’t be in a build.

I’ll keep an eye on it, thanks!

@halla : Hey, I updated my Krita Plus appimage. The new size for the selection marching ants feels now on my display like caravans of worms. But probably I can get used to it. I’ll tell after using it a couple of days.

@halla : I’m sorry but I had to roll back to a previous appimage after 1h to workaround the new marching ants size: I had two cases of small lasso selections (selecting an eye iris to move it around, and selecting a finger to rotate position) where the large dashes of white and black were both on my way visually (mainly not about the lenght, but too much contrast created by the 8 contiguous white pixels moving around).

Is it possible to revert it before beta3? I understand @Hologram 's issue; maybe this new size could depend of detection of high-resolution monitor?

Hmm, I checked Krita (4.4.8) , Photoshop, CSP and for me marching ants seems almost the same in all apps (FullHd res). Probably Photoshop is adjusting to the display resolution.

I agree with @Deevad about visual hindering, and, personally, I would prefer even smaller than we have now in stable version.

Or maybe make it an option after all as value box where users can type in the selection display width. For high dpi monitors the old size was barely visible, but considering the vast difference in monitor sizes (now and in the future) between 1080p and 8k, it’ll surely become an issue again at some point.

The option is a bad idea. It might be better to change the size of the “worms” dynamically depending on the size of selection.

I see that there is a difference in thickness in the comparison screen shot you showed earlier in the first post. It looks like photoshop has 2 px thickness.

Yeah sure, this is the pre-merge behaviour:
Krita: 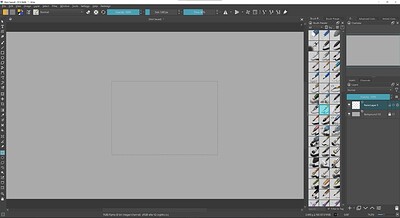 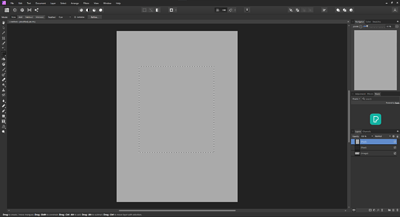 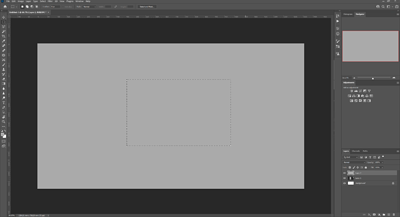 Higher res images: Imgur: The magic of the Internet

Please have a look at the recording, this makes the comparison especially visible.

There is no doubt @Hologram that the selection is too thin for a 4K monitor. It’s really visible especially when your resolution is downscaled to 1080p screenshot: interpolation makes the 4px marching ants blending together and a greyish soup of pixels. We can see on your example that other software scale up selection decoration depending the dpi of monitor. @raghukamath yes, it makes sens if the thickness can be adjusted for hi-DPI monitor too.

Here is what I experience:

Note: the behavior was reverted on my request on Krita 5.0 branch/Krita Plus (thanks @halla) but will still be part of Krita beta 3 (frozen since today 10amCET time). A dynamic solution taking account screen monitor or selection size (or both) is planed.

There is no doubt @Hologram that the selection is too thin for a 4K monitor.

On my 4K screen I don’t have any problem 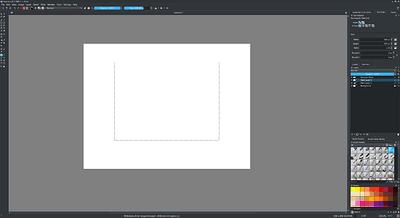 But in this case, the ant size should be relative to dpi (and not number of pixels on screen…)

Have you tried a more neutral grey? That’s were it starts to disappear on my end. On pure white or a saturated colour it is already much more visible.

My monitor is 27 inch too 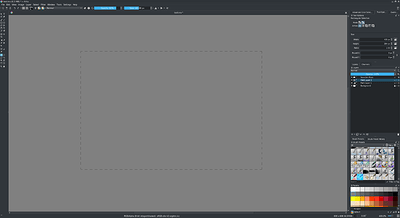 That’s still Ok for me, but I think I understand what you mean.
For me on neutral grey there’s a slight effect that is more something like an optical illusion.

Don’t know if greater ants would really solve the problem.

Maybe, if ant size could be a parameter in kritarc file it could help to solve the problem:

The fact that both Photoshop and Affinity Photo use a larger size to compensate for high-dpi tells me that that’s what makes it more visible. Although it looks like their ants are not as elongated, they are rather short dashes, instead of the long dashes in Krita. So the more frequent pixel change from black to white may also be part of the solution.

Unfortunately, Krita still isn’t useable for me with selections, see:

I can barely see that I have anyting selected, if at all.

This (my) posting doesn’t help either, but I can clearly understand/confirm your problem when viewing your screenshots. Strangely enough, I only have this on my monitors on the Full HD monitor (my TV) and can barely see anything there (though it’s about 3 m away), on the 1080×1200 and on the 4k I can clearly see the selection on all backgrounds. So I suspect, it seems to have something to do with the monitor?

A setting to adjust the marching ants would be helpful, at least for some.

@halla the video I posted above is on Krita 5.1 beta, Windows 10, 27 inch 4k monitor. This is the second time I tried to use Krita for production work and again I have an issie with the tiny marching ants. Is there any additional info I could give you to solve this (in my opinion show stopping bug)?

I’ll have to bring this up again, in the bug report I submitted on this (456364 – Marching ants for selection is not visible on 4k 27 inch screen), @halla and I were discussing how this issue might be addressed.
The fix that was merged a few months ago determines the size of Marching Ants based on the screen DPI.

The range for the scaling however is such that any FHD monitor and a 4K 27 inch screen both have the same scaling. Although I made a proposal in the bug report on how this range may be improved, it may still not be perfect for everyone. Therefore, I would like to propose for Krita to have a preference setting in Configure Krita… where users could determine the size of the Marching Ants (Vector/ Assistant handles could also be covered by this).

@halla agreed with me that this would be nice to have, but that the team is not all convinced. So let’s discuss it here.

If such a slider would be implemented, could it also account for the pre-selection lines drawn by:

And by Vector tools, such as:

I simply cannot see what I am doing, I’m guestimating and when the selection is created, it is as hard to spot as the preview was. On the other hand, the transform tool outlines are quite okay, it seems to be drawing an additional white line along the preview line, which is what appears to make it visible.

Whereas all the other vector previews appear not to do this: 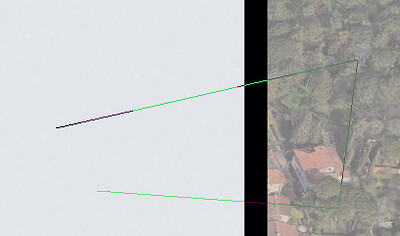 You’ll see when you zoom in by about 400% with the magnifying glass, but I can’t make a screenshot that way.

E: I would also like to add a pixel of width to the brush outline. But I’m not sure it should be coupled with the other settings as it could get quite wide then.

Yes, the value should be used in more places.