Under a starry night 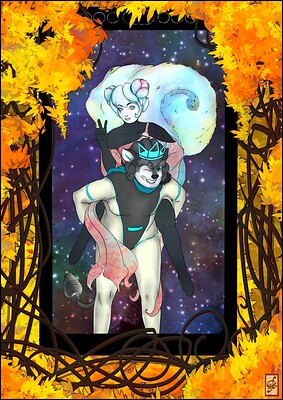 Concept idea:
Artists were asked to provide a souvenir of Kiki & Leon’s journey set in a season of own choice so I thought about the most typical souvenir of every trip, the photos.
They have been travelling together for a long time which means they got to know each other very well and they supported each other while exploring the misteries of the Art Universe. This is the reason of their pose, the piggyback riding symbolizes the collaboration between the two in a friendly, funny way.
Exploration was another key word for my concept, in this work it is represented by the tangle of leaves and branches. They went far and deep into the exploration of the infinite possibilities of artistic creation, a lot they have travelled and a lot they still have to, for art is an infinite universe (the starry night behind them)
Last but not least, the season. In the guideline of the contest it is said that ‘maybe in the end, they will be heading in different directions’. It’s not a final goodbye but it may be, in any case they had a wonderful time together and they wanted its memory to last. I tried to understand what all these topics could mean to me if I were in their place (different paths after a journey together, a final goodbye, the memories) and the feeling that emerged the most was a sweet melancholy, that kind of sadness that leaves a smile on your lips while you’re looking far away behind the horizon. That kind of feeling is represented by the autumn to me (and many others I guess).

This is what crossed my mind as I read the guidelines, I hope I got everything right

Process:
The first sketch was totally different from this work, I started with a concept and I redefined it a million times until I got to the final idea I exposed above.
I always start with a very rough pencil sketch, something I wouldn’t even define artistic then I take a photo and I upload it to my old faithful lowend laptop and begin to define the details over and over until it satisfies me. I made a lot of research to understand how to draw a piggyback pose but what it took me a lot of time was to understand that in english that pose is called piggyback