Hello everyone. Today is the last video on Vectors.
I am going to show you how to manipulate a vector text and create some playful designs. Then, at the end of this video, I will show you how to curve a text using our favorite plugin, G’mic.

WARNING: Since we cannot use G’mic with vector layers, and since we have to convert our vector layers into paint layers, please keep in mind that when you will increase the size of your picture, it will pixilate. Just wanted you to keep this in mind.

See you next time. 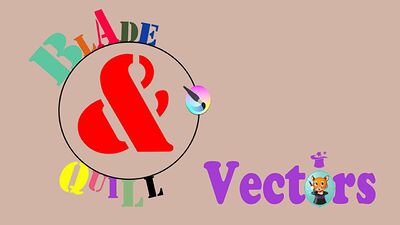 The font you used is one of the few that are suitable for that method, because it does not have enclosed white space.

With many fonts, you get this problem: 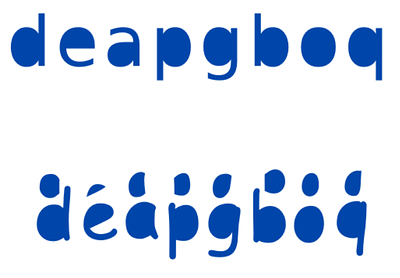 On the lower text, I’ve separated the enclosed white space elements which have been converted to ‘coloured space’ elements.
It is possible to repair this for each letter by using a vector Subtract action but it’s a very fiddly and annoying process that you’d never want to do again if you tried it.

Personally, I use GIMP if I want to put text along a path (of any shape) but I realise that not everyone would want to learn to use GIMP. Even if they did have it and use it then learning about paths and text along paths is not a trivial task.

Wow… Great to know. Thank you so much for sharing this with me! I had no idea this could happen. I did not test all fonts, as there are way too many of them. So wonderful that you discovered that for all of us.
As for Gimp, I have never tried it. I guess I should one day. When Krita cannot help me do some specific vector techniques, I usually go to Adobe Illustrator. That said, this tutorial was challenging. I’ve trying to curve texts in Krita for a while. I am pretty certain I missed a few things and your comment testifies to it. I just hope that the viewers got enough information that will help them start and inspire them to experiment on their own. Thanks Again, AhabGreybeard. Best wishes for the coming holidays. Hugs!