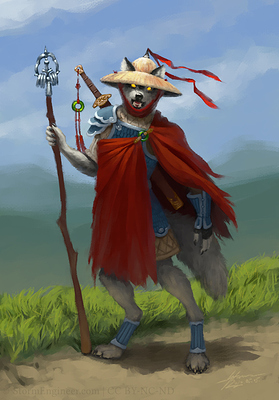 This was my entry to an art contest by Marco Bucci for a chance of winning one of those draw-on-the-screen tablets. (Judging in progress.)

We had to design and draw a character based on a prompt we chose. Mine is a bit more, and rather a basic background story:

Sheng used to be a great general and warrior, but he grew remorseful seeing the suffering war causes to innocent people. He renounced his titles and sworn to protect the helpless and innocent. The emperor in his rage deemed him a traitor and wanted to execute him, but eventually exiled him instead out of respect. He became a wandering hermit / vigilante.

Cool! - Nice work on the design and rendering.

Good luck with the voting!

p.s. I got a security warning when I tried to open your website. I think the certificate might have expired?

Let us know when you’ve got the result

Let us know when you’ve got the result

Though I wouldn’t play my chances very high. XD There are lot of good entries, many in my opinion better than mine.